Sulem Urbina will always fight the good fight, in and out of the ring.

Urbina does not mince words and freely tells things as it is, which may rub people the wrong way in a male-dominated sport.

That is okay with Urbina. She may be outspoken in terms of issues in the sport, but has done exceptionally well thus far as a prizefighter and hopes for more opportunities in 2021, including a shot at a world title belt.

Urbina will face Marlen Esparza Friday night at the Fantasy Springs Resort Casino in Indio, California. The eight-round bout will stream live on DAZN (8 p.m. ET/ 5 p.m. PT) and will be part of the Golden Boy Promotions card, which will be headlined by a middleweight clash between unbeaten Jaime Munguia and Tureano Johnson. 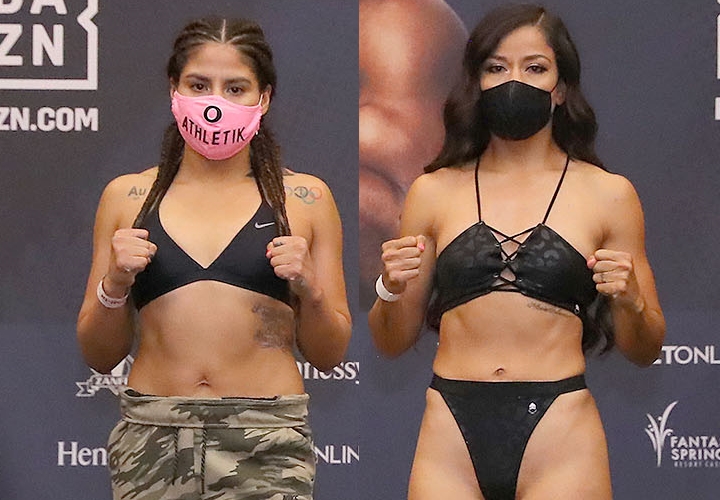 Urbina (12-0 1 NC, 2 knockouts), who currently resides in Phoenix, Arizona, defeated Noemi Bosques by unanimous decision in her last bout on February 6, which also took place in Indio. She has won her last six fights since suffering her only blemish on her record, which was a no-contest in the opening round against Gabriela Sanchez Saavedra in April 2018.

The 30-year-old had pushed Golden Boy Promotions, which promotes Urbina, for tougher fights and was able to land the Esparza fight after a war of words between the two last year on Instagram. Urbina admits there was a misunderstanding, but is glad she was able to secure a fight with Esparza, who has not fought since losing by unanimous decision to Seniesa Estrada on November 2 of last year.

“I actually wanted a fight against her for the longest time,” Urbina told BoxingScene in a recent phone interview. “This is a big opportunity for me. I believe she’s a great fighter and she has great skills. I thought that in her loss to Estrada, she should have made adjustments, but she didn’t. I’m sure a better Marlen Estrada is who I will face (Friday night). I will have to be at my best to beat her, whether it’s to be well-conditioned or if I have to brawl. It would be a huge benefit to my career by beating her.”

Urbina was born and raised in the northern Mexico city of Hermosillo. She made her pro debut three weeks after her 26th birthday and gained attention throughout the area by winning her first six fights.

She credits a strong amateur background for providing a solid foundation to develop as a pro fighter. As much as she done well in the sport, Urbina has been vocal about opportunities for female boxing and fans who criticize the sport.

Even as some are quick to criticize her social media posts, Urbina believes not speaking out against those who critique the sport hurts the industry.

“I believe there should be more backing and support for female boxing,” said Urbina. “The narrative is that we support one another and good things will come to the sport. That may be true, but I think there is a lot of talented female fighters that promoters and networks should continue to work hard for so that there are benefits all around to all fighters. More should stand up for female fighting.

“Female fighters in Mexico are popular but there are more opportunities in the United States. I know you hear about American fighters that pay promoters in Mexico for fights to pad their records. I wish I had that, but I have been able to carve out a good career thus far and continue to develop as a fighter. I was able to gain more attention after appearing on Box Azteca cards in Mexico, but I knew I had to move to the United States to develop and get better as fighter. Signing with Golden Boy was a huge step for me and I’m in the right place at the moment.”

Urbina also credits several people in her life for her success, including her husband/ trainer, her parents and her family. She believes she would not have the success she has today had it not been for a strict, but nurturing upbringing.

Urbina hopes that her success can motivate teen girls to pursue their dreams and not have anyone deter them from achieving their goals.

“My mom is my biggest supporter,” said Urbina. “She would be the one at ringside yelling, ‘Dale, mi hija (Hit her, my daughter).’ I’ve always felt that people are a reflection of their parents. My mom is the strongest person I know. So I had to be strong, physically and mentally. I’m grateful for the support I’ve received from my husband and coach, including my family who prepares and sells tamales.”

“If I have a message for teenage girls, based on my relationship with my parents and what I’ve had to deal with as a boxer and a woman, embrace your feminism. Embrace fighting for what is right. It does feel great to motivate young women as I’ve had a few reach out to me on social media.”

Urbina is confident all of the challenges in and out of the ring has made her a better fighter. She has so far proved to be a fighter, whether it is beating people up or standing up for what she believes in.

Urbina does have options as to who she wants to face in 2021, including any of the world titleholders in the flyweight division. She hopes a victory over Esparza would be that fight that would put her over the top.

“I treat sparring sessions as fights. My goal is to be an undisputed champion at 112 pounds. An impressive win over Esparza will be a statement to all the world titleholders in the division.”