Boxing fans worldwide are hunkered down for the foreseeable future, likely watching more old fights than they ever have before. Not that one ever needs an excuse to go back and watch Sugar Ray Leonard vs. Marvin Hagler, especially with literally nothing else to do, but its 33rd anniversary today is a pretty good one.

Leonard-Hagler is the perfect fight to re-watch in quarantine because it remains one of the most controversial bouts ever scored. Boxing fans often have very strong opinions about which fighter deserved to win, and both sides have a compelling case. The night of the fight, Al Bernstein scored it for Hagler, Harold Lederman scored it for Leonard and Larry Merchant scored it a draw. Although the fight is over three decades old, you can watch it like it’s the first time you’ve seen it, because you might just score it a different way.

What’s often lost in the ongoing debate about who won was how remarkable the achievement was for Leonard. Sugar Ray hadn’t fought in three years leading up to the fight, and only once in five years in a bout with Kevin Howard, a performance that underwhelmed him so much that he went back into retirement.  He had initially retired in 1982 after undergoing surgery to repair a detached retina in his left eye. With concerns about Leonard’s medical safety, three years of ring rust and the fact that he was moving up to middleweight for the first time, the earliest odds posted for the fight were 6 to 1 in favor of Hagler. Dr. Ferdie Pacheco even campaigned for the fight to not be sanctioned. As Muhammad Ali once said of Leonard though. “to be great, you’ve got to have heart, and Ray’s heart was bigger than all the rest.”

“I know exactly what it takes to beat this man, but people say, 'Well, Ray, two years of inactivity, you'll be rusty.' No, no. He will eliminate the rust because he is what I want and I am what he wants. And boxing needs that kind of fight,” Leonard said in a television interview in 1986.

It’s hard to even fathom what a modern equivalent of this would be. Floyd Mayweather coming back and beating Gennady Golovkin? Andre Ward coming back and winning a title at cruiserweight? Even those wouldn’t quite match the magnitude of Leonard-Hagler, nor would they come with true medical concern for one of the fighters.

“There was no reason to think that it was going to happen. Ray had the problem with his eye, and so it was out of sight, so to speak, and out of mind. At that time, the problem that he had with his eyes usually ended careers. It didn’t seem like he was coming back for anybody,” legendary HBO analyst Larry Merchant told Grantland’s Eric Raskin in 2011.

Leonard is the archetype for the modern savvy boxing businessmen like Mayweather and Ward, and that reputation was solidified in the build-up to the Hagler fight. The two circled one another for years, and at times it felt like Leonard was deliberately antagonizing Hagler, particularly in 1982, when he hosted a black tie affair in Maryland with Hagler in attendance, ostensibly to announce a showdown between the two, but instead told the audience “it will never happen.” By the time the fight did happen, Leonard negotiated every single detail of the fight to his liking, including three major demands: A 22x22 foot ring to give himself more room to maneuver, 10 ounce gloves rather than 8 ounce gloves to dampen some of Hagler’s power, and that the fight would be 12 rounds rather than 15. 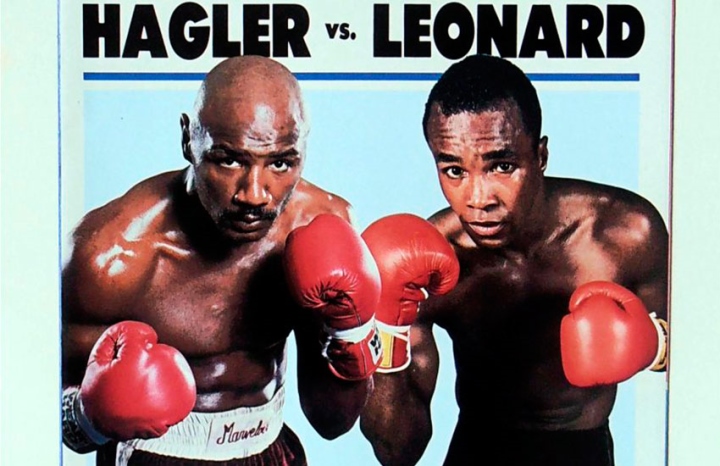 More than his leveraging in negotiations, Leonard was ahead of his time when it came to capitalizing on various revenue streams.

“The closed circuit locations were filled. This was the first fight that really started into pay-per-view (era) in various parts of the country.  It was a massive, massive event. The fight was sold out in one day," Bob Arum told USA Today in 2017.

Estimates are that there were up to 1600 closed circuit locations for the fight in the United States, from which Leonard received a sizeable portion of the proceeds. In addition. HBO paid a whopping $3.1 million dollars to simply replay the fight five times. The closed-circuit locations in total had an estimated three million seats.

While top-level boxers today are among some of the highest-paid athletes in the world, Leonard was both that and also likely one of the most famous people in the world at his peak, having effectively taken the torch from Ali as boxing’s mainstream star. In beating Hagler, he had overcome the final contemporary from his era, having already conquered Roberto Duran, Wilfred Benitez and Thomas Hearns. It’s difficult to overstate the heights of Leonard’s fame and professional acclaim at the time.

Even 33 years later, no fight has truly equaled Leonard-Hagler in terms of its combination of narrative intrigue, high stakes, caliber of competitors and then in-ring brilliance. Also lost in the debate over the scorecards is the fact that it was also the 1987 Ring Magazine Fight of the Year, a tremendous battle between two of the greatest of all-time.

The fight would effectively end one of the most magical eras in boxing history. Hagler would never fight again, and while Leonard, Hearns and even Duran would have a handful of more great nights in subsequent nights, they were indisputably past their peak greatness. Mike Tyson would take over from Leonard as the most famous boxer—and maybe athlete—on the planet, and would capitalize lucratively on the pay-per-view era Leonard and Co. helped usher in.

But in other ways, we’ve never moved on at all—33 years later and we still can’t agree on who won.

Hagler gave away some early rounds and blew the fight. He got outsmarted. That simple.

Unbelievable fight. Never gets old to me I could watch it over and over again. I thought Hagler won but it’s been debated a million time’s already so I’m not gonna do that, lol.

One of my favorite fights.

Lost in the shuffle, the rumor that Ray had eight actual behind closed doors contests with referee to shake off the ring rust and acquire the sort of timing and polish required to meet a certain standard for Hagler, who…

It appeared that the Hearns' fight had taken more of physical toll on Hagler's body than we had originally believed. That single fight alone aged him in one night. He was never the same fighter afterwards. Then he subsequently struggled…