MGM National Harbor, Oxon Hill -  Not all title eliminators are created equal. In the best of cases, they match two hungry contenders who fight like their fate rests on the result of the night. Fans got the best of cases at Jr. welterweight in the evening semi-final.

27-year old Subriel Matias (14-0, 14 KO), 139 ¾, of Fajardo, Puerto Rico, got out of a little bit of an early hole with a dogged, violent walking down of the no longer undefeated 28-year old Russian Maxim Dadashev (13-1, 11 KO), 139 ¼, of Oxnard, California in an IBF eliminator. Dadashev’s corner stopped the fight before the twelfth round.

The referee was Kenny Chevalier.

It started as a game of cat and mouse, Dadashev moving and largely able to elude the heavy hands of Matias in the first four rounds. The tenor of the night started to shift big in the fifth. Matias started to assault the body and quickly deflated the wheels of Dadashev. By the midway point of the fight, the red welt on Dadashev’s left side seemed to be growing ever more crimson. 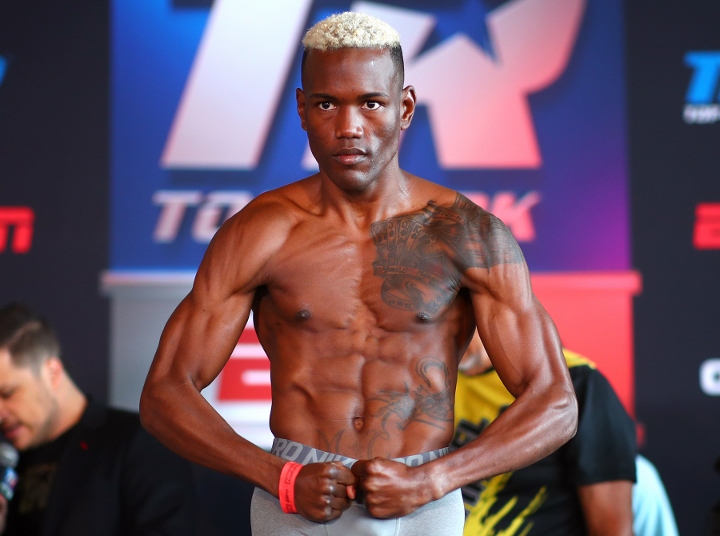 By the ninth round, Dadashev was forced to stay in the trenches and take his chances. Both young battlers landed big but it was Matias who was more active. Late in the following round, Matias appeared to rock Dadashev but the Russian stayed close and kept fighting. Despite an apparent lead, both of the eyes of Matias were swollen as they hit the last two rounds.

In the eleventh, Matias kept piling it on. Dadashev landed between his streams of shots but couldn’t line up the blow he needed. With seconds to go, Matias landed a sniping left and Dadashev’s feet nearly slid out beneath him. Instead, he just maintained his balance and Matias blasted him again near the ropes.

The corner of Dadashev, led by Hall of Famer Buddy McGirt, had seen enough. Dadashev would remain in the corner prior to the twelfth and final round while Matias, celebrating, took a critical potential step towards a shot at the IBF crown.

Dadashev was in worse shape than it appeared in the corner. Shortly after the fight, he collapsed as he was walking from the ring. He was escorted from the ring on a stretcher and taken via ambulance to the hospital.

[QUOTE=kidbazooka;19926579]I like Barrios but he isn’t there yet imo. Matias is there already he’s a big strong powerful Jww probably the most powerful one at the moment[/QUOTE]Subriel is 3 years older, but 10 less professional fights! They're both 5'10" with…

[QUOTE=Boxing Logic;19914090]Dadashev should have been fighting at 135. He was tiny in there. I wonder what the fight night weights were. He got weight bullied but I can't accuse the other fighter of doing it since it's Dadashev that is…