Stevenson: I'd Beat The Sh-t Out Of Frampton, Stop Him in Seven!

As previously reported on BoxingScene.com, Jamel Herring will not have to make his mandated title defense next against Shakur Stevenson.

Instead, Herring has been allowed by the World Boxing Organization to make a voluntary defense against Carl Frampton.

Herring is now in line to fight Frampton before the end of the year.

As part of WBO's order, the winner will have to fight Stevenson next or vacate the junior lightweight title.

If Herring (22-2, 10 KOs) wins, then Stevenson will be ready to face him. If Herring were to relinquish his championship instead of defending it versus Stevenson, the undefeated former WBO featherweight champion would fight the highest ranked available contender.

“If I’m being honest with you, if Jamel say no and don’t wanna fight, I don’t know how the WBO’s gonna work or what they rules gonna be,” Stevenson told BoxingScene.com. “They probably gonna make me fight whoever’s next in line." 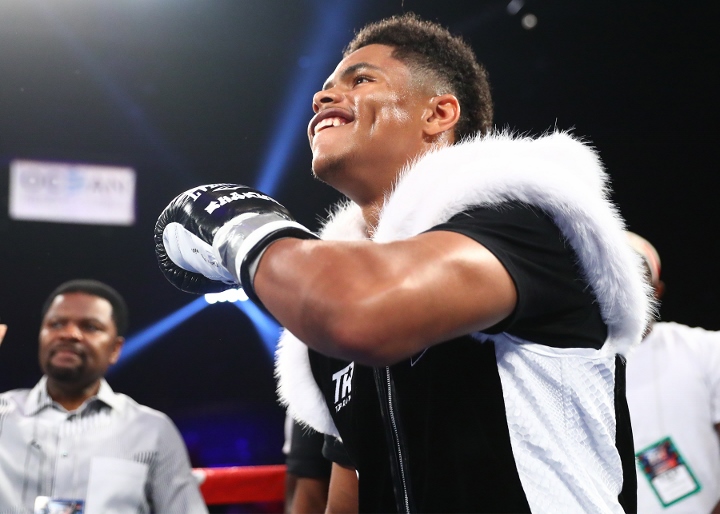 Mexico’s Oscar Valdez (28-0, 22 KOs), who is ranked second among the WBO’s 130-pound contenders, is unavailable because he already is committed to a fight against WBC champion Miguel Berchelt (37-1, 33 KOs, 1 NC) on December 12.

There is always the possibility that Frampton will unseat Herring and capture his third divisional title.

Stevenson is certain he would beat Frampton convincingly.

Stevenson, 23, would much rather face the 33-year-old Frampton in a major event than taking on third ranked contender Nakathila for a vacant title.

“Don’t get me wrong, I know the number three guy is in line, but I don’t feel he’s on my level. He’s not a big name and he’s not that good of a fighter. I think he got one loss already. I think me and Frampton would be a major fight. I think that would make a lot more sense than fighting the number-three guy,” Stevenson said.

Just as the 2016 Olympic silver medalist was willing to do to secure a featherweight title unification fight against England’s Josh Warrington (30-0, 7 KOs), Stevenson would face Frampton in his hometown of Belfast or elsewhere in the United Kingdom.

“I think that me and Frampton would be a big fight, a major fight," Stevenson said. "I think Frampton is the bigger draw. He got a whole country behind him. I don’t mind going to his territory and beating the sh-t out of him.”

Frampton is completely shot and far too small for the weight class. Few years ago a decent fight but not now. Frampton is just a front for his cartel bosses to wash money.

[QUOTE=buge;20808273]I don't think he really hit the chick at the beginning. He swung at the other guy and maybe his forearm on the follow-through bumped the girl, but that's all. [/QUOTE] That’s how I saw the video play out. He…

[QUOTE=buge;20808273]I don't think he really hit the chick at the beginning. He swung at the other guy and maybe his forearm on the follow-through bumped the girl, but that's all. As for the other guy, he went a little overboard…

[QUOTE=Fangedgrowl;20806953]Berchelt owns this dude. Breaks him down, makes him wilt. Frampton is better than Steveson thinks. I am really starting to dislike this kid. I dont like him at all. Talks to much crap hasnt beaten anyone of note. Starting…

[QUOTE=mlac;20806839]He was throwing haymakers to the back of that womens head and couldnt even KO her, yet he KO's Frampton in 7? :lol1: looking forward to seeing this melt cry infront of the cameras again tbf.[/QUOTE] Well we both know…