Note to the friends and family of Shakur Stevenson. When June 28 rolls around, gifts will not be necessary, as the WBO featherweight champion plans on staying 22 years old forever.

“Honestly, I really don't want to age no more,” Stevenson laughs when the topic of being 22, a world champion and a star on the rise with so much time to go before he even hits 30 is brought up. “I just want to stay 22. I don't even look forward to birthdays no more because it's sad to me. I don't really care for that stuff no more. I'm just trying to live it up while I can.”

Ah, to be 22 and on top of the world. It’s not something that Stevenson was destined for, not coming from Newark, New Jersey, a city that has taken down more than a few promising young people. And while some places have endless examples of folks that did break out, for Stevenson that wasn’t necessarily the case. He talks of NBA great Shaquille O’Neal being one, but that was a generation before the future Olympic silver medalist could relate.

“I had to just go with what I seen on TV and stuff like that,” said Stevenson, who has made it a point to not forget where he came from. And being so young, he’s still someone the kids of the city can relate to. Have there been hiccups along the way? Of course, but that’s to be expected of anyone growing up in public. The important part is that this is a fighter who wants to show the people from his hometown a different route.

“Those kids come from where I come from,” he said when I remind him of an event at the local Boys & Girls Club before the 2016 Rio Games where kids of all ages were locked in on every word he said. “Things like that definitely play a huge role in those kids' life and I want to be able to keep doing that. I can go to school and talk to the kids and I'm right there in their face. I want keep showing them that there’s a way to get out from where we come from.”

Stevenson is already out. Newark will always be a part of his DNA, but he’s also moved on. Now the talk isn’t of breaking out of a tough situation, but of keeping what he’s got while getting some more with each and every fight.

“That's really the main goal,” he said. “I've got great role models around me like J. Prince and Andre Ward, and I see their life and how they live and that motivates me to keep doing what I'm doing and get established in my career and make tons of money and become real successful so I can keep living the way that I live.” 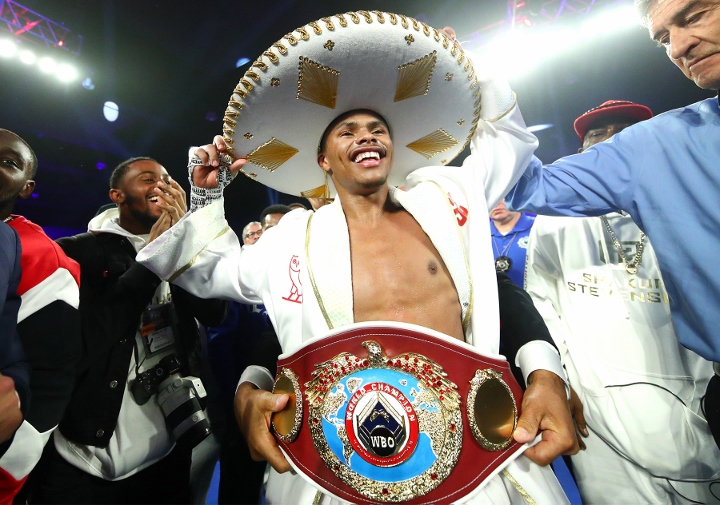 The first order of business? Win. Every. Time. Given his talent, that looks like the easy part. Staying focused when fighting the fights all young boxers, champions or not, take? That’s a little more difficult, even though Stevenson says all the right things about a contender he’s supposed to beat this Saturday, hard-hitting Colombian Miguel Marriaga.

“I know Marriaga is still a dangerous opponent,” said Stevenson, who will be making the first defense of the title he won last October by beating Joet Gonzalez.

So, he’s a patient man, then, willing to wait for the big fights like a unification clash with IBF boss Josh Warrington to materialize?

“Nah, I'm not patient,” he laughs. “I'm very far from patient, but things happen, and you've just got to roll with the punches, so I'm rolling with them.”

Patient, no. Mature when it comes to the inner workings of the pro game? Absolutely. Stevenson also admits that while he doesn’t feel he’s been tested yet, that day will come. And in one of the most honest statements you’ll hear from a prizefighter, he can’t wait to be in there with someone who will take him places he’s never been before.

“I know sooner or later it's gonna come and I'm gonna show the world that I've got that dog in me and I know how to bite down,” he said. “I ain't had that fight yet, but it's gonna come in the future.”

And that’s a good thing?

“For sure,” he said. “I can't wait for that type of fight. Maybe Warrington is that fighter.”

Maybe he is. And hopefully we’ll get to find out later this year. But in the meantime, the ageless Shakur Stevenson has Miguel Marriaga to deal with. Maybe Marriaga is that guy. And if he is, Stevenson is ready.

“I know what I'm built with,” he said. “I know the type of fighter I am. I know what the world don't know already. I know how tough I am, and I can take it as much as I can dish it, so I can't wait until that moment.”