ATLANTIC CITY – Steven Nelson made the most of his biggest opportunity Saturday night.

The Army veteran out-worked Cem Kilic and began beating him up to the point Kilic’s trainer, Buddy McGirt, had seen enough. McGirt jumped up on the ring apron during the eighth round of what had become a one-sided fight and asked referee David Fields to stop it.

Fields halted the action at 1:44 of the eighth round in a fight ESPN aired from Hard Rock Hotel & Casino’s Etess Arena.

Nelson (16-0, 13 KOs), of Omaha, Nebraska, recorded a stoppage in a super middleweight match that was considered a step up in competition for both boxers. The German-born Kilic, of Thousand Oaks, California, lost for the first time as a pro (14-1, 9 KOs). 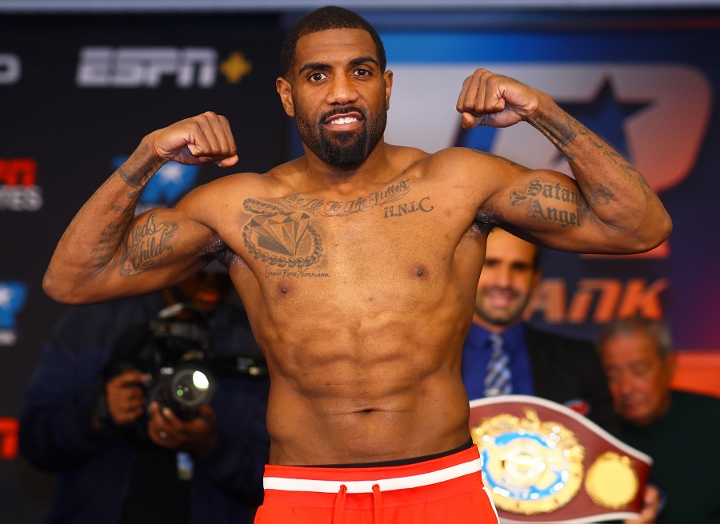 The 31-year-old Nelson, a stablemate and close friend of three-division champion Terence Crawford, was ahead by the identical wide score, 70-63, on all three scorecards entering the eighth round of a 10-rounder on the Jesse Hart-Joe Smith Jr. undercard. Nelson also won the regional NABO 168-pound championship.

Nelson began picking apart an exhausted Kilic during the eighth round. McGirt noticed his fighter’s punch production had dropped dramatically and seemingly had no chance to score the knockout he clearly needed to win.

“Buddy knows his fighter,” Nelson said. “He knows when enough is enough.”

Kilic nailed Nelson with a left hook in the beginning of the seventh round. Later in the seventh, Nelson landed two right hands and quickly moved out of Kilic’s punching range.

A right hand by Nelson backed Kilic into the ropes early in the fifth round. Kilic came back to land some shots on Nelson later in that round.

Nelson nailed Kilic with a left uppercut that stopped Kilic in his tracks just before the fourth round ended. Nelson was elusive in the third round, but he didn’t land many punches on Kilic in those three minutes.

Nelson caught Kilic with a left-right combination toward the end of the second round.

Nelson connected with a right hand early in the first round. Kilic didn’t land a noteworthy punch in those opening three minutes.

A left hand by Adorno (4-0, 1 KO) knocked Ibarra flat on his back with 33 seconds to go in the second round. Ibarra (2-3), of Fairfield, California, survived that trouble and didn’t get hurt again in the final two rounds.

Adorno, of Allentown, Pennsylvania, won by the same score, 40-35, on all three cards.

US Veterans gotta stick together! 11B in the house!

Nelson ain’t all that , maybe even so cold But Kilic really sucked Buddy and the rest of the corner looked discouraged after a few rounds

I thought Nelson was in deep but the truth is that he’s way better than we all thought and also Kilic isn’t as good as we all thought!

And people on here were claiming the US Army Soldier was definitely going to lose..well done Soldier, well done