Spong: This Is Manipulative Attempt To Remove Me From Usyk Fight

Tyrone Spong couldn’t believe what he was reading.

Even in the age of instant results being made available online, the unbeaten heavyweight was surprised to read from an outside party about his having tested positive for a banned substance before directly hearing about it through his own team.

Now in jeopardy is a planned showdown with unbeaten former World cruiserweight champion Oleksandr Usyk (16-0, 12KOs), who is due to make his heavyweight debut this Saturday at Wintrust Arena in Chicago, Ill. The show will still go on, but whether it will still include Spong (14-0, 13KOs) is now officially in doubt after promoter Eddie Hearn took to social media to announce the Suriname heavyweight had tested positive for a banned substance as discovered by Voluntary Anti-Doping Agency (VADA) random drug testing.

“We have been contacted by VADA to inform us that there has been an adverse finding in Tyrone Spong’s test,” Hearn noted through his verified Twitter account Monday evening. “It has been sent to the State of Illinois commission and further information will be released in the morning.

“We have reserve opponents standing by.”

BoxingScene.com has learned that Spong’s “A” sample showed an adverse finding of Clomiphene, which is commonly found in female fertility prescription medication. As it relates to usage by males (obviously not looking to get pregnant), it has been deemed by World Anti-Doping Agency (WADA) code as a masking agent, hence landing on the banned list both in- and out-of-competition.

VADA’s standard are far stricter, as the Las Vegas-based agency boasts a zero tolerance when it comes to all banned substances. 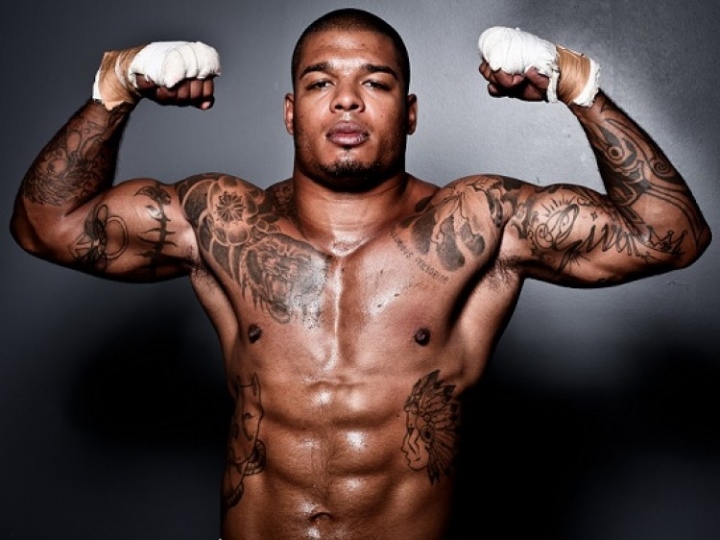 The positive test result was released by VADA to all parties involved with Saturday’s DAZN-streamed card. Hearn is the lead promoter for the event, feeling the need to alert the public of the news.

“We received the email (at roughly 7:00pm ET),” Marcos Gonzales, Spong’s manager told BoxingScene.com. “Eddie had already tweeted out the news by the time I saw the email notification.

“It’s very strange because Tyrone was just informed that he tested negative from the other tests we did.”

There are already whispers that plans are in place to remove Spong from the show, although the matter is subject to a hearing with the Illinois State Athletic Commission. Spong’s team planned to file a request for the “B” sample to be tested, although the timing of the news coupled with the process in having those results come back would come well after Saturday’s scheduled contest.

The timing of it all is what doesn’t sit well with their side.

“We had a face off today, and all of a sudden Usyk decided to shut it down,” claims Gonzalez. “We just had a weird feeling all day that something was off.

“Everything started to make sense after receiving that email from VADA.”

More direct to the point was the drug testing casualty.

“This is a set up,” Spong insisted to BoxingScene.com. “I vehemently deny that I have ever taken the substance named in VADA’s report. I have asked for testing of the B sample at a laboratory of my choosing.  “Testing performed last week at the request of the Illinois Boxing Commission showed, what I’ve always known, that I’m a clean fighter.”

Potential candidates to fill the void have yet to be revealed, although there are rumors of at least five heavyweights in line prepared to jump in on short notice.

Interestingly, it would mean a replacement for an already alternate opponent choice. Spong accepted the assignment immediately after his latest win, a 2nd round knockout of Jeyson Minda on Aug. 31 in Merida, Mexico. His name surfaced shortly after originally planned opponent Carlos Takam withdrew after signing with Star Boxing and wishing to take his career in another direction.

As for Usyk, it’s a five-month delay to his planned heavyweight debut. The 2018 Fighter of the Year was forced to postpone his planned clash with Takam in May, having suffered a torn biceps that put him on the shelf for eight weeks. Once fully recovered, the fight was rescheduled, only for a new opponent search to begin which led to Spong.

The situation marks the fourth DAZN event promoted by Hearn where a scheduled main event participant has tested positive for a banned substance. On two of the three previous occasions, the party in question was pulled from the event.

Billy Joe Saunders was denied a license by the Massachusetts State Athletic Commission after testing positive for banned substance Oxilofrine. The development cost him a planned fight with Demetrius Andrade last October as well as his middleweight title.

Jarrell Miller was the worst offender of the lot, testing positive for multiple banned substances ahead of his eventually canceled title shot versus then unbeaten and unified heavyweight titlist Anthony Joshua. The June 1 opportunity instead went to California’s Andy Ruiz, who made history as the first-ever Mexican boxer to win the heavyweight title, scoring one of the biggest upsets in boxing history in the process.

On both occasions, news of the test results were released almost immediately after VADA notified all parties involved. As much was not the case in a heavyweight fight this past July, when Dillian Whyte was permitted to proceed with his bout with previously unbeaten Oscar Rivas, surviving a knockdown to score a unanimous decision win.

The show went on despite Whyte and Matchroom being informed of the top rated contender testing positive for metabolites of a banned substance through random testing conducted through United Kingdom Anti-Doping (UKAD) agency, whose protocol only calls for their results to be reported to the offending side. Neither the results nor an emergency hearing held the morning of the contest were made aware to the public until days after the fight, with Rivas’s team only learning of the development by reading about it online.

Whyte's matter remains under review by UKAD, with a decision potentially being released this month.

Another DAZN card featuring an adverse finding came in September, when a sample provided by Heather Hardy prior to her loss to Amanda Serrano showed traces of the banned substance furosemide. Hardy (22-1, 4KOs) attributed the testing anomaly to having taken Midol to relieve cramping and is in the process of attempting to clear her name.

As for Spong, all he wants is for this matter to go through the proper channels and for the chance to clear his name and proceed with the biggest opportunity of his career.

“I ask Matchroom to publicly acknowledge that I tested negative for all performance enhancing substances just a few days ago,” notes Spong, who is sensing the deck is being stacked against him. “Any adverse finding is impossible and in my opinion a manipulative attempt to remove me from this fight.

“I voluntarily agreed to VADA testing because I have nothing to hide. I will not rest until I’m absolved of this outlandish allegation and will pursue all legal avenues available to me, including seeking legal damages to correct this wrong.”

[QUOTE=MDPopescu;20109495]... truth is that Spong never had the opportunity to "deal" with VADA in any manner...[/QUOTE] very true. It's really a potential career-ender for many fighters. Whenever anyone brings up fighters who didn't have to contend w/ VADA/USADA and can't…

[QUOTE=Adamsc151;20111655]To be honest, people are playing with fire by taking any supplements at all. The banned list gets updated so often that it's really hard to keep up, I've had friends and colleagues discharged from service due simply to not…

[QUOTE=Eff Pandas;20110398]I dont think this will get the same attention so I doubt it. Do we know what he got hit for. I thought I seen a name of something initially, but when Im looking around now Im not seeing…

[QUOTE=rudy;20109481]it is disgusting he was not even told by Hearns yet found in the newspapers my take is somebody realised Spong is no Bum he was rated 10 times a better fighter than Dilan Whyte was in K1 rules he…

[QUOTE=tokon;20109460]Seems a strange "rule" when the opposing fighter wouldn't be viewed as an "interested third party", doesn't it? After all it's him/her that'll be getting punched in the head by a potential cheater![/QUOTE] It is beyond absurd that the opponent…