Spence's Trainer: Haymon Made Arum, Matchroom Pay Fighters What They're Worth

Errol Spence Jr.’s trainer thinks even boxers who aren’t affiliated with the polarizing, reclusive adviser should show Haymon some gratitude. Derrick James discussed during the most recent episode of “The PBC Podcast” how Haymon’s history of helping fighters make more money than they’ve ever earned dramatically altered boxing’s economic model.

According to James, the way Haymon does business forced his rivals to pay boxers more than they otherwise would have compensated fighters in order to compete for their services.

“Put it like this – the game as a whole has not changed,” James told co-hosts Kenneth Bouhairie and Michael Rosenthal. “But I think that the game-changer was Al Haymon. … If you think about in the history of boxing, there’s only a couple guys making money, making a million dollars, making a couple hundred thousand dollars. Even though Bernard Hopkins say he was the champ for all those years, he was only making like $75,000 a fight or something like that, I heard. So, if you think about it, now with Al paying the guys what they were worth, everybody else had to do it to compete.

“So, he made Bob Arum start paying, made Matchroom [Boxing’s Eddie Hearn], made all these guys start paying the fighters. So, all these fighters that may talk bad about Al or whatever they say, they have to pay homage because it would not be like that had it not been for Al Haymon paying his fighters the way he pays them. Because that made everyone else have to contend, have to pay more money. Now, Matchroom overpays people just to try to compete, you know? Certain guys who’s making millions of dollars now are not million-dollar fighters. So, they have to thank Al Haymon.” 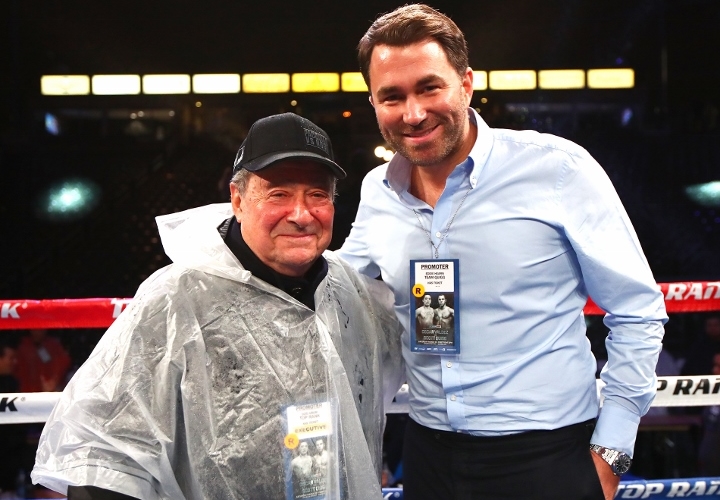 Haymon worked with Floyd Mayweather Jr. throughout the height of a 21-year career in which Mayweather made more money than any boxer in the history of the sport – in excess of $800 million, according to some estimates.

[quote=griever0730;20501391]lol. Put the haymon pom-poms down for a sec. Do you have a source with the info on the contract they sent andrade? I remember hearn returned the favor for a one-off on dazn with a supposedly the biggest payday…

[QUOTE=HaymonzPlanet;20500908]actually both charlos sent contract to andrade and he turned both down! We will get charlo vs deryenchnko soon and charlo vs eubank also... Meanwhile andrade will duck jacobs and callum smith lmfao[/QUOTE] Lol. Put the Haymon pom-poms down for…

[quote=griever0730;20500680]crawford may have not yet fought the marquee names at ww, but to say he's fought nothing but bums is ridiculous. He's fought a bunch of quality guys since lw & he's made them look like less than what they…

[QUOTE=Shadoww702;20497887]Yeah Oscar was trying really hard to make that fight. Just like he’s trying Tank vs. Garcia[/QUOTE] Tank been avoiding Garcia Do your research

[QUOTE=HaymonzPlanet;20498280]haymon didnt change the game " a bit " he totally changed the whole damn model! Fighters are the bosses now which was never the case before haymon! Haymons guys fight tough fights all the times.... Its those matchroom guys…