Spence's Trainer: Errol Earned A Lot Of Respect With Win Over Brook

Derrick James still doesn’t feel Errol Spence Jr. gets enough credit for what he has accomplished as a professional prizefighter.

Spence’s trainer thinks, though, that Spence converted countless non-believers by traveling to Kell Brook’s hometown and knocking him out to win the IBF welterweight title in May 2017. The Spence-Brook bout was competitive in the first eight rounds, before a persistent, strong Spence began beating up the former champion in the ninth round at Bramall Lane in Sheffield, England.

The powerful southpaw punished Brook late in their fight, when Brook suffered a fractured orbital bone around his left eye. Spence sent a battered Brook to one knee early in the 10th round and made Brook take a knee midway through the 11th round, which encouraged referee Howard Foster to stop the action at 1:47 of the 11th, as soon as Brook got to his feet following that second trip to the canvas.

“Errol earned a lot of respect, for sure, with that fight,” James told BoxingScene.com. “The day of the fight, the people over there were very hostile. But after the fight, they were very respectful. I think he earned their respect over there. He showed a lot of people in the world that he is a very talented fighter and that he is a very powerful puncher. It was great to be part of that.”

Showtime will replay Spence’s stoppage of Brook on Friday night at 10 p.m. ET/PT. 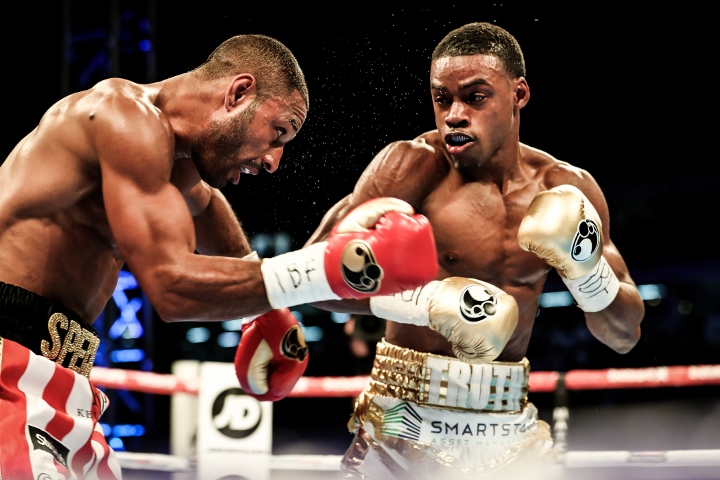 Spence, then 27, was the IBF’s mandatory challenger for Brook’s title. The DeSoto, Texas, native beat Brook in enemy territory, where a capacity crowd of approximately 27,000 packed a soccer stadium to support Brook.

“When I looked around and they were announcing the fight,” James said, “I looked around at everyone in the audience and they were chanting and spitting at us, throwing brownies at Errol and things like that. It was a very hostile crowd. Everyone was against us. It was Errol’s initiation to big-time boxing, being a world champ, to listen to a crowd like that.”

“We knew going in that Kell Brook is a very tough, very physical, really strong guy,” James said. “So, we knew that he had a lot of good skills. We were just able to out-man him. I always said [Brook is] in great shape, but he’s in shape to fight at his own pace. So, when we picked up the pace he couldn’t keep up with [Spence], even though he tried to. And that’s what really allowed us to take over – the pace, the barrage of punches, because Errol throws a lot of punches. It was our work rate and our pace. Even though a lot of people might not have seen it, that’s what it was. He showed he was able to step up to the plate and do even better than people expected.”

[QUOTE=Citizen Koba;20546192]Absolutely... these are guys who basically have to fight half their careers on the road and 9/10 are gonna have the judges against 'em, whether in Europe or the US. One of the reasons why much of the time…

If it wasn't for the headbutt Brook had his number

[QUOTE=whatismyname;20545888]...and then he lost alot of respect for ducking Crawford[/QUOTE] a lot You're welcome

Brooks clan are always hostile, but a very respectful lot. Any fight he has is a good crack and a bout at "the lane" is/was a special occasion for him. Any loss is gutting but he would have been devastated…

I gave him more respect for the Garcia win.