Spence's Coach: Whatever Garcia Brings, We'll Have The Answer!

In his most high profile fight to date, Spence will defend his belt against four division world champion Mikey Garcia.

The contest takes place in less than two weeks, on March 16th, at AT&T Stadium in Las Vegas. 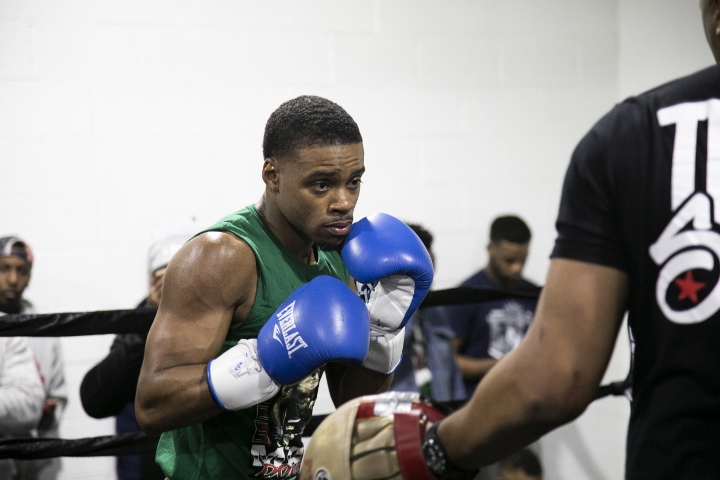 Spence is a huge favorite to walk away with the victory.

The odds are partly due to Garcia, the current WBC lightweight champion, moving up by two full weight divisions to take the bout.

James assures that Spence is not taking it easy in camp or overlooking Garcia in any way.

"I just think Errol is so hungry and he has the ability to be great. The way he adjusts in the fights and he really sets the tone. Most of all, his fights have been one-sided. Regardless who he's fighting against, how great they are, what their record is, what they said they'll do to him, he's just been able to have one-sided affairs. Hopefully we can have the same thing in this fight," James said.

"This has been a tremendous training camp. I've seen how hard Errol has worked and how motivated he is. He's extremely confident, and rightfully so. On March 16, I know Mikey is going to come prepared, but so are we. Whatever Mikey brings into the ring, we're going to have the answer."

Richard Schaefer, the lead promoter for the card, expects a lot of success due to FOX giving the overall card a lot of coverage as part of their content deal with Premier Boxing Champions. The bout will be carried on Fox Sports Pay-Per-View.

"FOX is really putting their weight behind boxing, and you've seen what that meant for other sports. When UFC got involved with FOX, you saw how it elevated the sport of MMA and UFC... FOX is doing the same thing now on the boxing side and I really believe it will elevate boxing. It brings the general market to this sport, and I think that's what we're going to see here with this pay-per-view," Schaefer said.

[QUOTE=jvsnypes;19565646]That would not be surprising. I would honestly pick Crawford over Spence because of his versatility. I’ve seen Crawford make his adjustments in the ring. I have yet to see that with Spence. But, he’s been good enough to win…

[QUOTE=NachoMan;19565332]Crawford won't just compete with Spence; he's going to school him.[/QUOTE] That would not be surprising. I would honestly pick Crawford over Spence because of his versatility. I’ve seen Crawford make his adjustments in the ring. I have yet to…

[QUOTE=methodcal;19565193]I hope the ref watches closely and [B]Robert keeps the towel in his hands[/B][/QUOTE] True he will need to wipe Spences blood off Mikey.

Team Spence is ready to [B]ruuuuuun[/B] it seems like. (I mean "Box", Big bad Scurry Erroll) All 147lbs PBC fighters tooooo shook, So Mikey had to [B]BALL[/B] up & show dem panocha's how its done.

[QUOTE=jvsnypes;19564727]... The only 2 fighters at 147 that will be competitive against Spence are Crawford and Thurman and that’s because they both have excellent foot work and speed with power...[/QUOTE] Crawford won't just compete with Spence; he's going to school…