The undefeated IBF welterweight champion made sure that was understood when he was asked Tuesday about possibly boxing Garcia later this year. Yet now that Garcia has brought it up, Spence is intrigued.

“That could happen,” Spence told a small group of reporters during a luncheon at a Manhattan restaturant. “Mikey Garcia is a big name, has a great resume and that fight could definitely happen. We fight on the same network [Showtime], have the same manager [Al Haymon]. Why not make it happen? It could happen.”

Garcia is a big name, but he’s not a big guy. Thus the four-division champion’s ambition is admirable, but moving up two weight classes, from lightweight to welterweight, to fight the biggest, strongest champion at 147 pounds probably isn’t advisable.

Spence’s size and strength advantages would make him a considerable favorite over Garcia, who’s about four inches shorter than Spence and hasn’t boxed above the 140-pound limit.

Those concerns aside, the schedules of Spence (24-0, 21 KOs) and Garcia (38-0, 30 KOs) should align for them to fight late this year if Garcia can beat Robert Easter Jr. in their lightweight title unification fight July 28 at Staples Center in Los Angeles (Showtime).

Spence is firmly committed to fighting a third time in 2018 and the two welterweight title unification fights he wants against the Danny Garcia-Shawn Porter winner and Keith Thurman won’t be available to him by November or December.

Garcia (34-1, 20 KOs) and Porter (28-2-1, 17 KOs) are expected to fight for the WBC title Thurman relinquished August 25 at Barclays Center in Brooklyn. The winner wouldn’t be afforded enough time off before he would have to head back to training camp for a dangerous fight against Spence before the year ends. 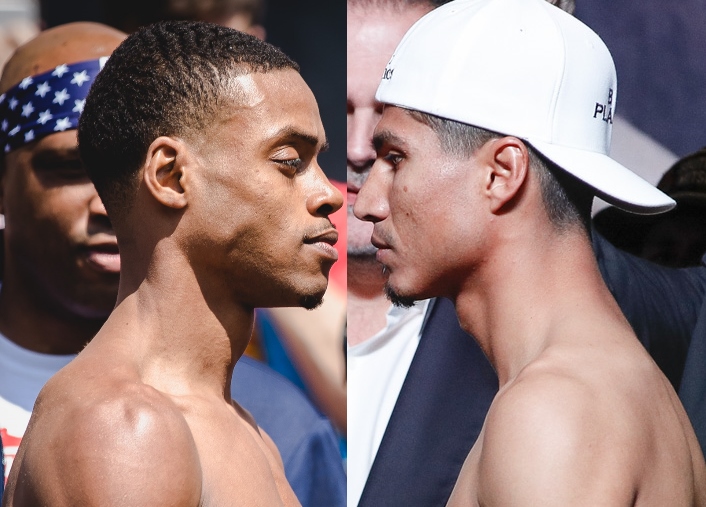 The often-injured Thurman (28-0, 22 KOs, 1 NC), who still holds the WBA championship, is expected to fight twice more before even considering boxing Spence sometime in 2019. Spence also says he won’t try to make an appealing showdown with WBO champ Terence Crawford (33-0, 24 KOs) until after he fights the Garcia-Porter winner and Thurman.

If Garcia defeats Easter (21-0, 14 KOs), the WBC lightweight champion would like to challenge WBO champ Vasily Lomachenko next in what would be one of the biggest fights in boxing. Lomachenko (11-1, 9 KOs) is recovering from shoulder surgery, though, and isn’t likely to take on an opponent as dangerous as Garcia in his first fight back, perhaps as early as December.

Garcia’s history with Bob Arum’s Top Rank Inc., Lomachenko’s promoter and Garcia’s former promoter, could complicate negotiations for a Lomachenko-Garcia fight as well. If Garcia feels the Lomachenko match might not materialize, he could pursue a comparable high-profile fight.

That could lead Spence and Garcia toward each other, especially since Haymon and Showtime would compensate both boxers handsomely for that fight.

“It definitely could work out,” Spence said. “If he wins – say if he wins because Robert Easter, that’s my guy. That’s my friend. So I’m not saying [Garcia is] gonna win, but if he does win, the fight could happen.”

Spence isn’t chasing Garcia. He is only considering that option because his preferred fights won’t happen by the end of this year.

The strong southpaw mentioned former WBO welterweight champ Jessie Vargas (28-2-1, 10 KOs) as a potential opponent for his final fight of this year. Spence isn’t especially interested in facing Yordenis Ugas (22-3, 11 KOs), who’s ranked No. 2 by the IBF, in his next fight.

A fight against Garcia figures to be better received among fans, despite Spence’s obvious advantages, than bouts with Vargas or Ugas.

“I didn’t challenge him,” Spence said. “He challenged me. So I think the reaction would be positive. They’ll probably praise him because he’s showing a lot guts, a lot of heart for moving up to fight a so-called big welterweight. So, I mean, that’d be good. And then I’m fighting a guy with a great name and a great resume.

“And like I’ve been saying before, that’s the type of people I wanna fight. So I think they’ll want that fight. I think that’s a big fight. I think we could make that happen. Maybe L.A., maybe San Antonio, maybe at the Barclays [Center]. Who knows?”

Assuming Garcia is serious about facing Spence, the 2012 Olympian is impressed. Spence isn’t necessarily surprised because Garcia, who has fought as low as the featherweight limit of 126 pounds, already has moved up to 140 pounds and defeated former four-division champion Adrien Broner (33-3, 24 KOs, 1 NC) and previously undefeated former IBF junior welterweight champ Sergey Lipinets (13-1, 10 KOs) by unanimous decision in 12-round fights over the past 10 months.

“It says he’s a true champion, he’s a true fighter and he dares to be great,” Spence said. “Just to move up to fight somebody who’s supposedly the most feared boxer in boxing, and he’s moving up to take that challenge, he’s basically daring to be great, daring to be a Hall-of-Famer and do something that, you know, a lot of fighters are not willing to do, especially in today’s times. So kudos to him.

“Much respect to him for even mentioning that. But, you know, like I said, a lot of people mention a lot of things, a lot of people say a lot of things. But once it’s brought to you, you know what I’m saying, people rarely accept it or live by their words. So, I mean, he could just be blowing smoke. I don’t know. If the fight is offered to me, I will take that fight. But we’ll see.”

If Garcia, 30, were to lose to Spence, 28, rather than facing Lomachenko in a fight he seemingly has a better chance to win, fans and media might give Garcia a pass because he would have moved up two divisions to face an undefeated knockout artist. Kell Brook was afforded similar leeway when he moved up from welterweight to middleweight and was stopped by Gennady Golovkin in September 2016.

Spence still doesn’t view their potential pairing as a no-lose situation for Garcia.

“He could take a lot of punishment, too, from a bigger guy,” Spence said. “So, I mean, I’m not gonna say it’s a no-lose situation for him because you’re going up, fighting a bigger guy, a stronger guy, a guy who can punch with both hands and has a come-forward style where, basically, I’m trying to punish my opponent. So it could hurt him in that aspect. I don’t know.