Spence: Weird People On Twitter Told Me, 'I Wish You Would've Died' In Car Accident

DALLAS – Errol Spence Jr. was taken aback the first time he checked his social media accounts about two weeks after his scary car accident in October 2019. (photo by Ryan Hafey)

Spence appreciated the kind, encouraging words mostly from strangers who wished him well in his recovery. The unbeaten IBF and WBC welterweight champion couldn’t help but notice, though, that were some people with real hate in their hearts, most of whom hid behind fake accounts that emboldened them to post mean messages they otherwise wouldn’t.

“At first, it surprised me a little bit,” Spence told BoxingScene.com following a press conference Wednesday at the Renaissance Dallas hotel for his fight against Danny Garcia on Saturday night. “I was like, ‘Man, the stuff that people say.’ Some people were like, ‘I wish you would’ve died,’ and this and that. They said all types of things. And I’m like, ‘I don’t even know you. I haven’t did anything to anybody,’ and they’re saying they wish I died in a car crash. So, it’s just crazy some of the things people say. For me, it don’t really bother me. I just look at it like, ‘People crazy.’ It don’t strike a nerve because I don’t know the people. The first time I saw it, I was like, ‘What the hell? This is weird.’ ” 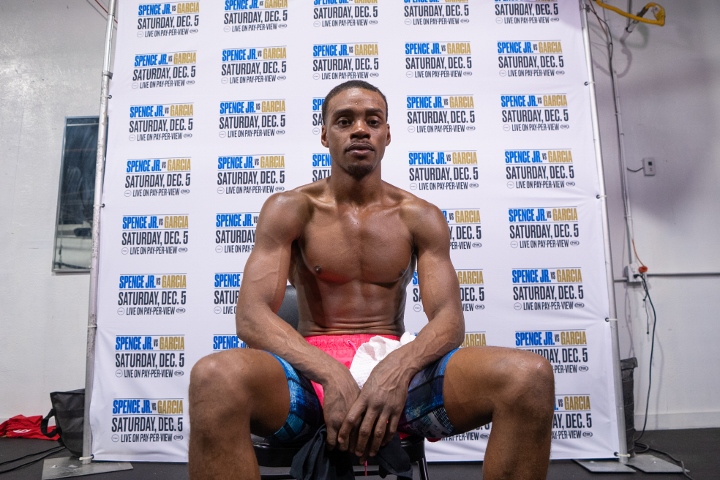 Spence spent nearly a week at Methodist Dallas Medical Center following a one-car accident in which he was ejected from his Ferrari, which flipped multiple times. The 30-year-old Spence suffered cuts and scrapes to his face and body, as well as damage to his teeth, in an accident he says changed his perspective on his life and his boxing career.

That accident also resulted in Dallas Police charging Spence with a misdemeanor count of driving while intoxicated. Spence was alone in his car and the only person injured in the crash.

The DeSoto, Texas, native fortunately recovered from his injuries and returned to trainer Derrick James’ gym in February. Spence (26-0, 21 KOs) will fight for the first time since his accident when he squares off against Garcia (36-2, 21 KOs) in a FOX Sports Pay-Per-View main event at AT&T Stadium in Arlington, Texas ($74.99; 9 p.m. EST; 6 p.m. PST).

Spence – who has approximately 673,000 Instagram followers and almost 179,000 Twitter followers – has tried his best to ignore negativity on those platforms.

“I just learned that on social media, people are weird, especially on Twitter,” Spence said. “I’ve never seen so many fake accounts in my life than they have on Twitter. It’s just crazy to me that there’s people that got time out the day just to take their time to make fake accounts on Instagram and Twitter and all that. I appreciate the love from people, especially people, looking back on my accident, giving me well wishes and wishing me back to recovery and wishing me the best health. So, there is a lot of love on Instagram, too, but there’s a lot of hate, too. It’s whatever you pay attention to, that’s what you’re gonna get more of.”

[QUOTE=buddyr;20951672]Get off Twitter. A grown millionaire should not be concerned with what people type to him online. That is sad itself.[/QUOTE] Dude is a clown, I used to root for him heavily. It’s clear fighting Bud would be an accident…

[QUOTE=BlackR0bbb;20951678]Your food sucks ass. Everyone knows this. And your batty women are just as bad. "Tourist attraction"??? You've lost your damn mind. What do people come there to see, Big Ben and your fancy umbrellas? You're funnier than Benny Hill.[/QUOTE]…

[QUOTE=Sid-Knee;20951657]Good, because you'd be lost when it comes to hygiene. Tell me which British foods you've had and what was so bland about it? Hmmm? We don't get stoned on alcohol over here. We get drunk. You need cannabis to…

Get off Twitter. A grown millionaire should not be concerned with what people type to him online. That is sad itself.

[QUOTE=BlackR0bbb;20951065]I'm not talking about food hygiene, wee lad. I'm talking about the way your food tastes and how bland it is. No wonder you guys stay stoned on cheap ale all the time. No one goes to the UK and…