Spence: Ugas Is A Great Fighter; But Outside Of Hardcore Fans, Nobody Knows Him

Ugas nearly upset Shawn Porter in their 12-round fight for Porter’s WBC title in March 2019. The Cuban challenger’s split-decision defeat to Porter is Ugas’ lone loss in his past 11 fights.

Spence still doesn’t expect to square off against Ugas in the foreseeable future. The unbeaten IBF/WBC 147-pound champion wants bigger fights against the likes of Manny Pacquiao, Terence Crawford and Danny Garcia. 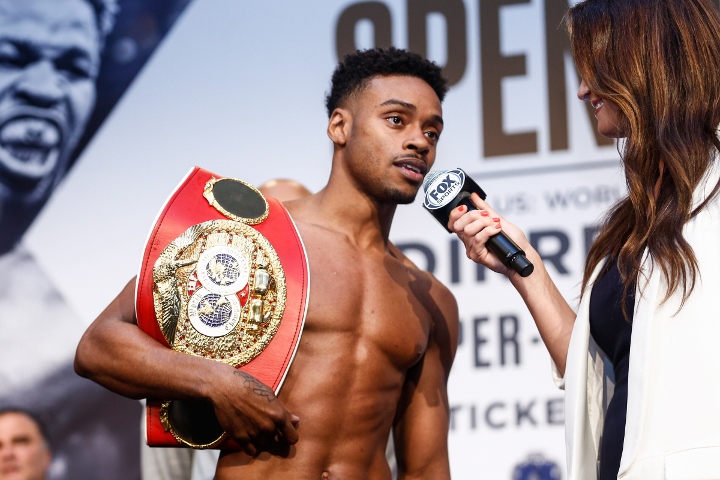 Spence (26-0, 21 KOs) noted during a recent episode of Brian Custer’s podcast, “The Last Stand,” that Ugas’ comparatively low profile pushes him down on the list of opponents Spence expects to fight.

“You know, that’s the only knock to him. Once he gets there, once he gets behind me, then I’ll turn around and we’ll fight. But, you know, right now, you know, it’s not a guy that, you know, I’m just gonna be calling out to fight because, I mean, hardcore boxing people know him. But outside of that, you know, nobody know who he is.”

The 33-year-old Ugas (25-4, 12 KOs) is the WBC’s third-ranked contender for Spence’s championship. He also is rated number one among the WBA’s top 15 challengers for Pacquiao’s crown, but Ugas hasn’t been mentioned as a potential opponent for Pacquiao’s next fight.

As far as fighting Spence, Ugas told BoxingScene.com earlier this year, “Whenever he wants to fight, I’m ready to do it. I just want the chance to fight Spence.”

Ugas feels Spence did enough to beat Porter (30-3-1, 17 KOs), who lost a 12-round split decision to Spence on September 28 at Staples Center in Los Angeles. If he were to challenge Spence, though, Ugas is sure he would give the strong southpaw at least as much trouble as the rugged Porter provided.

“If I fight Spence, I think I would be able to do things technically that Porter couldn’t do when he fought [Spence],” Ugas said. “It would be a more technical fight. I would give him a very difficult fight.”

I'm tired of this **** which is why I don't check for boxing as often as I used too. All this non sense and they still won't generate as much as Broner has over their careers if they keep this…

[QUOTE=Ca$ual Fan;20606178]Lol, you’re easily triggered by my post you even have to double quote me. Please dude, you’re not fooling anybody with your long post and a single link that shows your minor point to cover up the bull.s.****s you’ve…

I think Ugas is the boogieman of the division nobody wants to fight a unknown thats as tough as nails, big risk little reward, been lots of real tough guys just like Ugas over the years.

[QUOTE=Doubledagger;20601928]Lol, you are so delusional! Spence didn't even want to fight Mikey Garcia for your information. [url]https://www.boxingscene.com/spence-porter-took-easy-way-out-why-garcia-fights-happening--137141[/url] Spence's words and actions have always lead to one thing, unification of the belts on the PBC side, and then a final showdown…