It seems so harsh that a glove briefly skimming the canvas determines the outcome of a 36-minute battle that is fought with vigour, passion and heart.
But that’s what happened in Los Angeles on Saturday when Errol Spence squeaked by Shawn Porter over 12 frenetic and enthralling rounds. (photo by Ryan Hafey)

In the end the unbeaten Spence won via split decision and with a scoreline that, for once, gave credit to both in a historic 147lbs war for the ages.

Spence won by a generous 116-111 (twice) while Porter took it on the third card 115-113 but it was Porter’s 11th round touchdown and subsequent pursuit of trying to make amends which saw him lose ground rather than make it up that determined the outcome.

Porter was veteran stubborn throughout.

He’s not in the business of selling his surname to make someone else’s record look good.

If you want his scalp, he’s going to make you earn it.

“Showtime’s” seen it all before. He wasn’t going to bow before another world-class fighter with an impeccable reputation.

They took a look at one another through the opening minutes and Shawn swirled forwards with both hands in rounds three and four. His jab was busy, industrious and he kept investing to the body.

Spence had said during fight week that Porter fought like he was drowning because he flailed behind both hands when he attacked. But for Porter, he wanted to take Spence into the deepest waters, to show him that if he wanted to unify he would have to go somewhere he’d never been before.

Shawn was making it gruelling but doing so at a cost. He shipped a hard left here, a crunching bodyshot there.

After four rounds it was already getting rough and unyielding. The pace was hard. It was damaging.

The fifth was more considered from both. Porter threw more but was less accurate. Spence was defensively strong and offensively articulate. His face, deadpan as ever, betrayed nothing but his heaving chest conveyed the relentless nature of the contest.

But Spence is such a savvy operator. 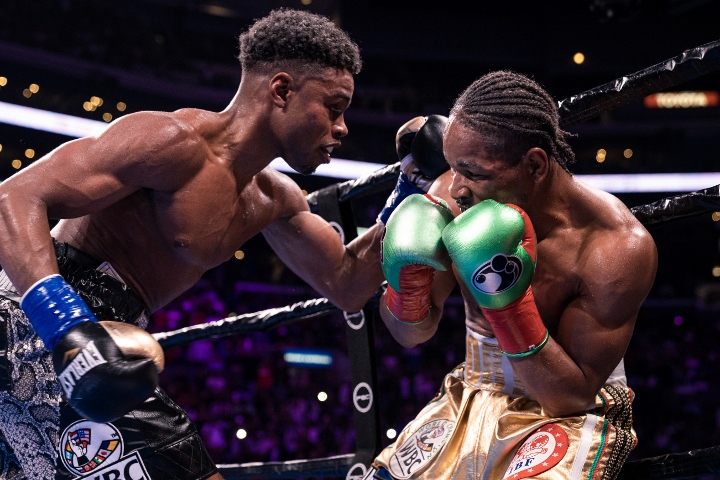 He can break you up from the inside out or from the outside in. He had to withstand big shots towards the end of the seventh to both the body and head as Porter scythed in rights up and down.

Shawn’s ambition burned brightly through the eighth. He smouldered with a desire born from not getting the credit he has been due. He’s a throwback who can box, bang, brawl, dish it out and take it.

The entertainment flowed through that session. Would one of them wilt? Could we get 12 rounds of top shelf boxing?

With four sessions remaining it seemed to be in the balance. If there was any gap in an elite fighter, which many believe Spence is, and world class like Porter, it was minimal. Errol got the better of some close-of-the-ninth-round trading but Porter stuck it on him as the 10th opened.

Referee Jack Reiss had to separate them as they smothered one another’s intensity in the round 10 but it was largely breathless stuff.

In round 11 the battle lines remained drawn. Porter planted his feet and came in hard, Spence bit down to contain him and then, in a pivotal exchange, Porter’s legs bailed on him ever so briefly when he needed them most. He got caught on the chin by a Spence left and his left glove stroked the canvas. The knockdown was rightly called, the irreparable damage was done. Porter muttered something, kicking himself for his involuntary and momentary submission.

“Let’s go,” he screamed at Spence, clearly fearing that had swung the bout irreversibly in the Texan’s favour.

Porter tore into “The Truth” but he couldn’t hack the defensive system in front of him.

“Showtime’s” work became a little desperate and his lack of efficiency saw him burning through his remaining cylinders. Spence, who’d been more economical throughout, still had more to spare and as the fight burned through the final embers of the 12th he looked bigger,  he looked stronger and, tellingly, he looked better.

Yes, the 116-111s were too wide but the result was fair. It was close, hard fought every step of the way and brutally entertaining.

Fans would have hoped to hear Spence yell for Terence Crawford from the rooftops. Hell, they would have admired him for offering Porter another go round.

But Danny Garcia was presented in the ring immediately afterwards as the next man for Spence. That was a shame. Good for Danny but Porter and Spence didn’t need to share the spotlight last night. It shone brightly on them both. The margins between success and failure and victory and defeat are sometimes incremental.

History might not remember exactly how close it was in there, throwback Porter may never get his just dues, but for one night, the biggest of his career so far, the only difference between him and ‘elite’ – for many if not two of the official scorers – was his left glove marginally colliding with the canvas.

I think Manny has earned the right to go out how he chooses....If he isn’t fighting for or defending a title! If he’s going to fight for or defend his title or someone else’s he has to fight the best!

Can't get with the conclusion of this article. Spence controlled several aspects of the fight. The idea that Porter's glove brushing the canvas (as if that were an accident) is the only thing that keeps him from being elite is…

[QUOTE=Terrell1555;20093256]Great fight! Congratulations Spence the new unified champion top man in the division! Crazy how fans claim Haymon protects his fighters while the best of PBC are fighting one another! Yeah they may be in house fights but they are…

Good scrap. Spence 7-4-1+ KD was my score. Porter fought a great fight, and I think showed CLEARLY that he is not just a pressure fighter with a ugly style. It may be a bit ugly, but his footwork on…

Was Shawn really juiced? Never seen him that amped.whatever happened to the testing report?