Spence: There Were Times I Wanted To Quit, But I Didn’t Wanna Let My Kids Down

DALLAS – Errol Spence Jr. admits there were times amid his challenging comeback that he wanted to quit boxing.

Whenever those thoughts crossed Spence’s mind, however, he looked toward his family for motivation. Spence primarily was inspired by his two young daughters – 5-year-old Ivy and 3-year-old Violet – and later by the impending birth of his son, Errol III, who was born a month ago, while battling back from injuries sustained during his well-documented car accident in October 2019.

Spence expressed what drove him to remain committed to boxing Wednesday during a press conference to promote his welterweight title fight against Danny Garcia on Saturday night at AT&T Stadium in Arlington, Texas.

“Man, really, just a lot of hard work and a lot of discipline,” Spence explained, “you know, having my family and, you know, my parents and my coach [Derrick James], and my day-one friends and people just supporting me. And just seeing my kids every day, you know, I wanted to get back and, you know, I would just train hard and stay in the gym and stay focused and, you know, don’t let outside distractions get to me. And that’s basically, you know, what I did.” 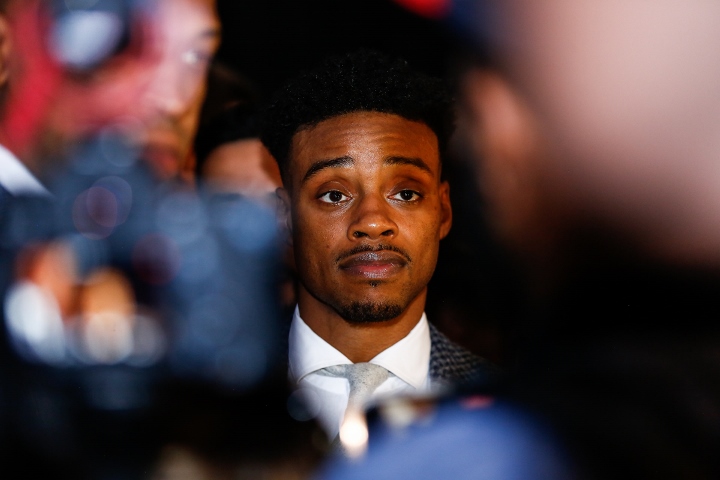 The 30-year-old Spence (26-0, 21 KOs) returned to James’ gym on a regular basis in February. The strong, skillful southpaw didn’t spar for the first time until September 28 – the one-year anniversary of his split-decision victory over Shawn Porter in their 12-round welterweight title unification fight.

By then, the DeSoto, Texas, native had already agreed to square off against Garcia (36-2, 21 KOs), a two-weight world champion who figures to seriously test Spence in his first fight since he topped Porter 14 months ago at Staples Center in Los Angeles.

Spence has repeatedly promised that he is the same elite-level fighter he was before enduring cuts to his face and body, as well as damage to his teeth, in that one-car accident. Grinding his way back to this point tested his resolve, however, so much that he wondered whether returning to the ring would be worthwhile.

“You know, it was a lot of times, you know, I wanted to give up, I wanted to quit,” Spence said. “But, you know, just seeing my loved ones and not wanting to let my kids down, because when they get older, how I’m gonna tell them to keep going, when they wanna quit at something, if I had quit? You know, so when I went to the clinic and went to the doctors, and they told me, you know, basically I didn’t have any brain swelling or any blood [on] my brain or anything like that, you know, I decided to continue my career and to get back. And that’s basically what we did.”

Despite understandable questions about Spence’s formidability following his accident, most sports books have made him at least a 4-1 favorite against Garcia. He’ll defend his IBF and WBC welterweight titles when he faces Philadelphia’s Garcia in their FOX Sports Pay-Per-View main event ($74.99; 9 p.m. EST; 6 p.m. PST).

My dude if u end dead or paralyzed you gonna let your entire family down. He should have took a tune up first

Some of Spence's comments are scary. They suggest he could get hurt tomorrow night. IF he's having neck or head pains he shouldn't be fighting. SERIOUSLY. A man's life is a lot more important than a title belt. I hope…

There doesn't seem to be any public transport in huge swathes of USA. So how are you supposed to have a drink & go home?

Is it odd that he didn’t spar until September?

''Kept getting 'Past Due' letters in the mail''