Ask my wife of 13 years (and best friend of 14), Danielle, and she’ll tell you I’m as likely to be up at 2 a.m. watching replays of old Olympics or Super Bowls as I am to be sleeping and dreaming.

But it’s not just sports for the sake of sports.

While some fans can get a competitive contact high watching a fourth-quarter nail-biter between no-hope teams in Week 8 of the NFL schedule, it’s always taken a bit more for me to feel the buzz.

I need a little something more on the line to make it matter to me – beyond partisan and/or financial interests, of course – and I’m willing to sacrifice a level or two on the action side in favor of a contest where the winner advances and the loser goes home.

The same holds true when it comes to boxing.

So while the standard answer for “most exciting fight” for fans of a certain age tends to include something with the names “Gatti” and “Ward” attached, their three-bout series has never scored anywhere near that high on my scale.

I’ll concede the combatants in those bloodbaths have hearts the size of watermelons, courage that goes for days and a “you hit me/I hit you” warrior capacity that I tend to lose after the first few repetitions.

I watch them and am entertained, certainly. 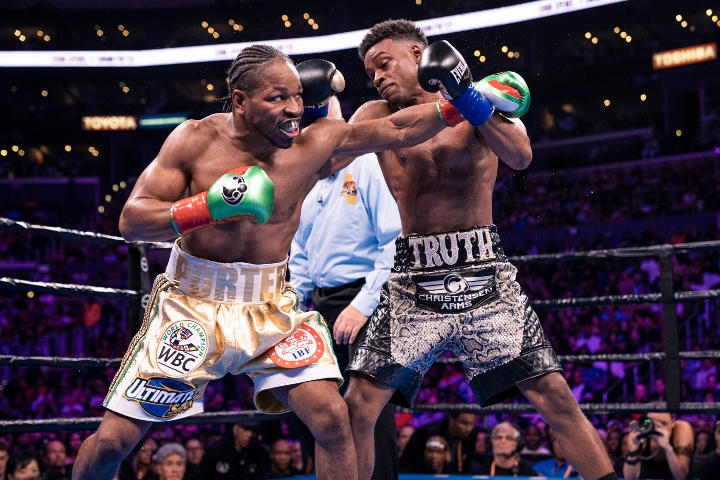 But while I don’t know how it feels to be that good or that tough, I do know what transports me.

And several rounds of caveman back and forth – no matter the participants – just isn’t it.

In fact, when it comes to replays I’m likely to be watching in the wee hours in weeks to come, give me last Saturday’s main event in Los Angeles any day.

Not only did Errol Spence Jr. and Shawn Porter show every bit the guts as their aforementioned 140-pound predecessors, they did so on a skill level to which neither Gatti nor Ward ever ascended.

The narrow winner is a unified champion and a bona fide pound-for-pound elitist, not just a winner. And the loser’s stock, too, elevated far beyond where it had ever previously been.

Was it the same violent spectacle? No.

But, to me at least, it carried far more consequence.

Toward that end, and in much the same manner that recently departed TV treasure Harold Lederman instructed us rounds are judged on clean punching, effective aggressiveness, ring generalship and defense, I’ve decided my four measures for all-time great fights are current/historical significance, departure from pre-fight expectation, in-fight momentum shifts and level of sustained action.

I applied those criteria to my all-time favorite fight – Diego Corrales vs. Jose Luis Castillo I – and scored the 2005 showdown a perfect 40.

Same score goes to the generational classic between Marvin Hagler and my all-time favorite fighter, Thomas Hearns, though the more recent slugfest nudges ahead on additional criteria, simply because it lasted a shade more than 29 minutes as opposed to slightly less than eight.

The 14-rounder that matched Aaron Pryor and Alexis Arguello for the first time in 1982 gets a 40 as well, while the fourth go-round between Juan Manuel Marquez and Manny Pacquiao in 2012 also warrants the perfect number thanks to 18 minutes of back and forth that culminated in a shocking conclusion on the sport’s biggest pay-per-view stage.

What all those fights had – in addition to more violence than any 10 “typical” fights – was a compelling angle that involved a championship, a pound-for-pound standing or a legacy, something that drew the viewer’s eye long before it became apparent that the fight itself was pretty good. And it’s having an extra something that allows a match to bypass stimulating and head straight toward unforgettable.

Case in point, Corrales-Castillo was a showdown of two of the best lightweights in the world.

And Marquez-Pacquiao was the latest in a series of meetings between men whose rivalry defined their 21st century era.

The reality is that most “early candidate for Fight of the Year” brawls ultimately shrivel to no more than footnotes. And when compared to ones whose images stay for life, they’re just another one-night stand.

[QUOTE=Real King Kong;20099061]what you posted read as though flloyd fought gatti because the other belt holders refused to face him...which in hatton's case would have been an impossibility given the timeline.[/QUOTE] ——— I agree. I should have given it more…

[QUOTE=Oregonian;20098972]—————- Floyd went after Gatti for the belt. There was zero challenge there. Floyd also needed that crossover stardom that he did not have. Gatti had it. After that, none of the Jr WW belt holders or top dawgs wanted…

[QUOTE=Real King Kong;20096248]Hatton won that belt less than a month before Floyd fought gatti. Are you saying that hatton refused to fight Floyd, so he turned around and fought gatti 20 days later instead? Or were you talking about the…

It was a good fight. To me, a great fight has big back and forth swings, drama.