The closest that Errol Spence and Shawn Porter had previously come to fighting at the famed Staples Center was nearly seven years in separate bouts on the same Dec. 2012 show five miles down the road at the now-defunct Los Angeles Sports Arena.

So when the opportunity arose for their head-on collision to appear at the venue, both immediately jumped at the chance.

“Definitely, it’s one of the venues I haven’t fought at before,” Spence (25-0, 22KOs) noted to Fox Sports’ Kate Abdo while promoting the September 28 Fox Sports Pay-Per-View headliner during a recent airing of Inside PBC Boxing. “I’m always fighting in New York, of course I love New York.

“But I’ve always wanted to fight in L.A. I haven’t fought in L.A. since I think my 4th or 5th pro fight so, you know, it’s something different.” 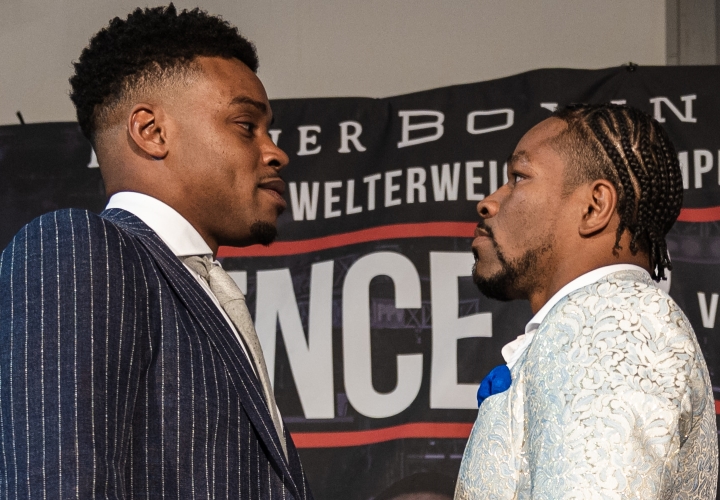 Spence’s aforementioned appearance in the market came in just his second pro fight, shortly after his run as the last American male boxer standing in the 2012 London Olympics. The unbeaten Dallas-bred boxer now returns nearly seven years later as a reigning welterweight titlist and among the sport’s best pound-for-pound athletes in the world today.

Porter (30-2-1, 17KOs) has fought in the greater Los Angeles area three times before, which just so happen to be arguably the three roughest nights of his 11-year career. The squat Akron, Ohio native—who now lives and trains in Las Vegas—was held to a 10-round draw versus faded former lightweight titlist Julio Diaz in his aforementioned lone appearance specifically in Los Angeles.

Two appearances have come at Dignity Health Sports Park—formerly (and still better) known as StubHub Center, and Home Depot Center before that—in Carson, Calif. His first at the venue ended his first welterweight title reign, dropping a 12-round decision to England’s Kell Brook in their Aug. 2014 title tilt.

The venue hosted his most recent affair, finally posting a win in the L.A. market but in a struggling 12-round affair with Yordenis Ugas this past March. Several observers felt Porter was fortunate to escape with the narrow decision and his second title reign still intact.

Given his own history in the area, it’s a wonder why Porter would want to return for the biggest fight of his career, a welterweight title unification bout as well as his first PPV headliner. The answer to that, is the last PPV event to have headlined from the area.

“We were just there for Wilder and Fury,” points out Porter, whose win over Ugas earned his first title defense of his second reign which began with a 12-round nod of Danny Garcia last September in Brooklyn. “That had been the first time I’ve been there for a fight at Staples, then I thought ‘Wow it’d be nice to fight here.’

“And then we announce the fight and they’re telling us that it’s going to be at Staples. That’s been the most exciting part to me so far of this promotion.”

A press conference will be held in the area on Tuesday to formally meet for the first time since revealing the date and location in late July.

[QUOTE=1hourRun;19983601]Will Kell Brooks be there offering the winner a blow-job? Can Terence Crawford have leftovers, PLEASE![/QUOTE] Is that what you're hoping for? Kell Brook being there to offer a blow job? Tell me when these fantasies started for you 1Hour?

[QUOTE=Letmaku;19983830]Pacman will be on the house.[/QUOTE] Maybe, but he will be hiding in a back room somewhere and will only emerge if Porter wins somehow. No way does he step up to Spence. We already saw how excited he was…

PBC's PPV fights have horrible so far. I like both guys and I think this will be a good fight, but it won't be a PPV worthy fight. I do not spend a dime on fights like this because it…

I like both guys but I’ll be rooting for Showtime on fight night. This guy at least has the balls to step up to the plate and fight the most avoided guy at 147. Mad respect.

Spence for the w