Spence on Charlo-Rosario: Jermell is Going To Try To Dominate, Knock This Dude Out

Unified welterweight world titleholder Errol Spence Jr. is preparing for a defense against former world titlist Danny Garcia, which will headline a Fox PPV card on Nov. 21, but he is also a boxing fan and looking forward to seeing stablemate Jermell Charlo’s junior middleweight title unification fight with Jeison Rosario.

Charlo, who owns one title, and Rosario, who holds to two major belts, will meet to unify their three straps on Sept. 26 on a six-fight Showtime PPV doubleheader at the Mohegan Sun resort in Uncasville, Connecticut, though without spectators in attendance due to the coronavirus pandemic.

“I feel like that’s a fight that’s slept on,” Spence told BoxingScene.com.

Like many, Spence expects the fight to be action-packed even though he favors his friend Charlo, whom he often trains with and with whom he shares trainer Derrick James. Spence said he has been in the gym training alongside Charlo over the past few weeks.

But Spence (26-0, 21 KOs) certainly does not count out Rosario, who made a name for himself in January when he traveled to Julian “J Rock” Williams’ hometown of Philadelphia and knocked him out in the fifth round of a major upset to take his two world title belts. 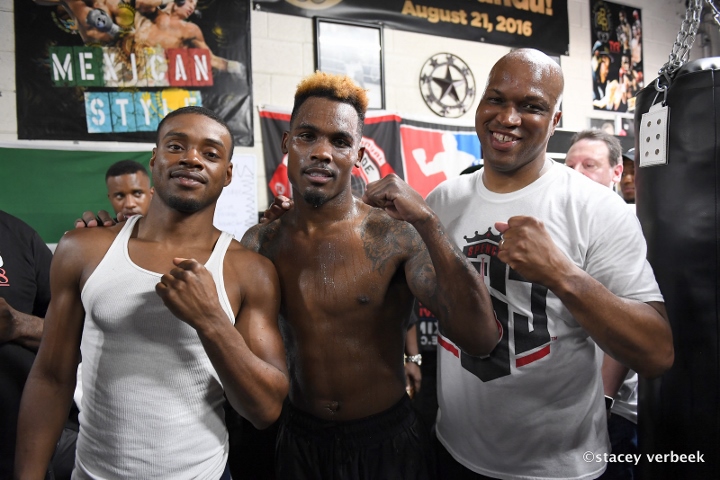 Rosario (20-1-1, 14 KOs), 25, of the Dominican Republic, will be making his first defense against Charlo (33-1, 17 KOs), 30, of Houston, who will be making the first defense of his second title rein after knocking out Tony Harrison in the 11th round to reclaim the 154-pound belt in their rematch in December.

“Rosario he’s a big fighter. He’s not small,” Spence said. “And he finally gets to go to training camp, prepare for fights right instead of just taking a fight or jumping in a fight in four weeks or five weeks. He’s finally got 10-week or a 12-week training camp.

“I watched his (virtual) press conference. He’s got some swagger. He’s wearing designer shades, stuff like that. The hunger is different now especially after his signature win, so I feel like he’s gonna come with it and with Jermell, I feel like Charlo twins (Jermall and Jermall) they always feel like they have something to prove. They feel like they’re gonna knock you out. They feel like everyone is against them. With them, they have a chip on their shoulders. They always have to prove something.

“So with this fight Jermell has to prove he’s the best fighter at 154 and he’s going to try to dominate and knock this dude out. So I just think it’s going to be a great fight all around. Jermell is in great shape right now, training hard in the Texas heat. He’s already basically on weight and I’m excited for this matchup. I just wish him the best.”

As for an outright prediction, it probably comes as no surprise that Spence is going with his stablemate.

“I like Rosario as a fighter but I think Jermell is going to beat him,” Spence said. “Rosario has been stopped before. He has been hurt before and recently Jermell’s been showing knockout power. I feel like if he catches Rosario with a good shot he could stop him but I’m going with Charlo by decision.”

In Rosario’s lone defeat, Nathaniel Gallimore knocked him down three times in a sixth-round knockout in April 2017 in Las Vegas. Since that loss, Rosario is 8-0-1, including winning five of the bouts by knockout.

Charlo has recorded knockouts in six of his last seven victories, including in his last two fights against Harrison and Jorge Cota, whom he drilled in the second round. The only opponent to go the distance with Charlo in that span was in June 2018 when former world titlist Austin Trout, who has only been stopped once and known for having a strong chin, made it to the final bell.

Spence said he will enjoy watching the Charlo-Rosario fight as a fan but does plan to eventually go up to the junior middleweight division looking to win a world title in a second weight class.

“I’m not going to step on Jermell. He wants to be undisputed at 154 and then eventually move up, so I wouldn’t go up there and shortstop him or try to fight him because we’re stablemates,” Spence said. “But definitely, I will be moving up. I’m not saying soon, but in the next two years, definitely I’ll be moving up.”

Rosario is a big strong heavy handed fighter who can box but his boxing skills are not as good as Harrison's or Charlo and Charlo is just as strong and is more atheletic and is a faster fighter.

[QUOTE=Curtis2;20771358]Rosario is as good as boxer as Harrison only bigger & stronger...Rosario's knockout power will be testing/reaching Charlo's chin in this match...[/QUOTE] ACTUALLY, Harrison is bigger ..Rosario is 5’11 with 70inch reach ..Harrison is 6’1 with 76inch reach

Rosario is as good as boxer as Harrison only bigger & stronger...Rosario's knockout power will be testing/reaching Charlo's chin in this match...

That’s because they aren’t promoting it to the best of their abilities! We should be seeing the Charlo’s on ESPN and Rosario/Dervyachenko on ESPN deportes! This is a fight where someone is touching the canvas or getting knocked out in…