Spence: A Lot Of Boxers On Edge, Can't Wait For Boxing To Pick Back Up

Errol Spence has long ago reached a point where expects the best version of any opponent who steps to him in the ring.

That same belief still exists, perhaps more than ever as he and so many other boxers are eager to resume their careers coming out of the coronavirus disease (COVID-19) pandemic.

“When it opens back up, people are going to be hungry,” Spence (26-0, 21KOs) during a recent interview on The Last Stand Podcast with Brian Custer. “A lot of guys are hungry. A lot of guys don’t get paid as much as I get paid, or as much as other top athletes. So, a lot of them—before this pandemic been going on—have been just nickel and diming it, basically scraping the bottom of the bucket. They really want it now, they’re really focused and been training, stuff like that. A lot of them are on edge right now and can’t wait for boxing to pick back up.

“I know there’s a lot of hungry guys out there and I’m hungry to get back at it.” 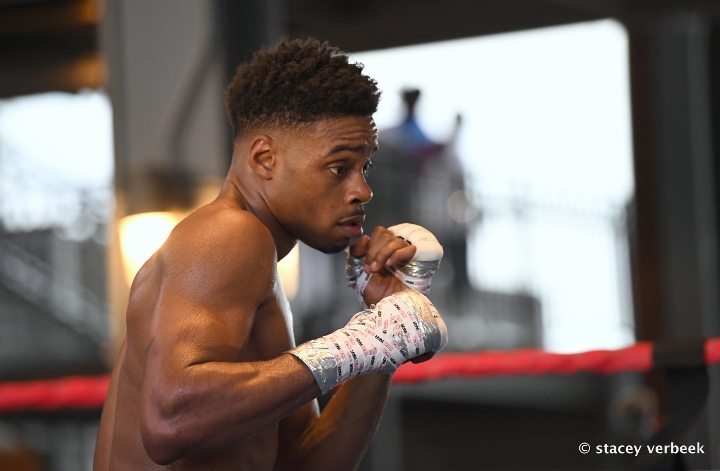 Spence has been out of the ring since a split decision win over Shawn Porter (30-3-1, 17KOs) in their welterweight title unification thriller last September in Los Angeles. The 30-year old from Desoto, Texas was next due to face former two-division titlist Danny Garcia (35-2, 21KOs) in January, but those plans were derailed after he suffered injuries in a horrific single car crash last October.

The bout is rumored to be his first one back whenever boxing resumes, likely to take place in October or November according to information casually provided to his team. Spence has already dismissed the notion of entertaining a tune-up despite going through an extensive recovery process. The idea of welterweight peers like Garcia, Manny Pacquiao (62-7-2, 39KOS) and Terence Crawford (36-0, 27KOs) waiting in the wings is motivation enough to return at full strength.

Seeking out that level of competition further fuels his own motivation to come back better than ever. It’s the same advice he offers to any boxer who’s been forced to find alternate means of staying in shape with so many establishments still closed during the ongoing global health crisis.

“I would tell all the fighters, just keep focused, and keep training. If you can’t train (in a gym), train at home. Shadow box, hit a bag, go run and do that just to stay on top of your game.”

If you are unwilling to embrace the harsh reality of fighting without an audience, thus less money, then you should be prepared to rot on the shelves for a long while. Start looking for regular jobs doe. Nobody is forcing…

[QUOTE=KTFOKING;20592897]But those fighters who haven't fought this year and were supposed to get a fight in for the early part of the year? It IS a long time and someone like Spence who was set to fight in January, he…

[QUOTE=Boxfan83;20592883]Its been like 3 months (if that) most Champs these days fight once MAYBE 2xs a year any way. Ca[/QUOTE] But those fighters who haven't fought this year and were supposed to get a fight in for the early part…

Its been like 3 months (if that) most Champs these days fight once MAYBE 2xs a year any way. Ca

bruh, its only been like three months and its all already kicked off in Nicaragua a weeks few ago, Toprank is back in business in a few days. Chill the fook out.