IBF welterweight champion Errol Spence has one goal in mind for Saturday night - to score a knockout victory over WBC champion Shawn Porter, when they collide at Staples Center in Los Angeles, California.

Spence is coming off a dominating twelve round unanimous decision win over four division champion Mikey Garcia, who was moving up by two weight classes from the lightweight limit.

"I showed people that I have the great boxing skills against Mikey Garcia, and now I'm going to remind everyone about my power on September 28," Spence said. "Anyone who doubts me just motivates me to keep grinding and go even harder. They can keep doubting me but I'm going to stay focused and train hard. Everything I said I'd do in a fight I've done so far. I expect a knockout and that's what's going to happen on September 28." 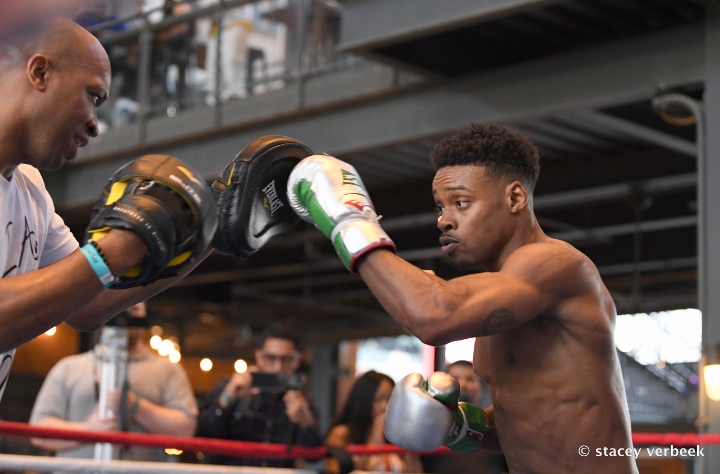 Spence has studied a lot of Porter's fights and sees several flaws that he can exploit when they step in the ring.

"There are parts of Shawn's game that I know I can exploit. We work hard to be ready for any kind of style he tries to bring. I'm mentally preparing to break him down and make it a calculated knockout," Spence said.

"The winner of this fight is definitely going to be the best welterweight in the world. There's no way around it. Being a unified champion and stamping my place in the division makes me even hungrier to win."

Porter believes that he will bring something that Spence has never seen before - and Spence has the same belief for their upcoming contest.

"I'm different than anybody Shawn's ever fought. I'm not Keith Thurman and I'm not Danny Garcia. Shawn has been in a lot of close fights with great fighters, but I'm going to bring something he's never seen before," Spence said.

[QUOTE=FredRekk;20082334]The WW division is trash right now. It’s been in shambles post May-Pac era. Pacquiao just whooped Thurman who was TOP DOG in WW division. And he did so at 40. And literally EVERY WW is calling out pac. Spence,…

[QUOTE=El_Mero;20080164]Still wondering why people rank him so high with that lacking resume he has.[/QUOTE] The WW division is trash right now. It’s been in shambles post May-Pac era. Pacquiao just whooped Thurman who was TOP DOG in WW division. And…

[QUOTE=JakeTheBoxer;20082155]Yes, that is all true. But still, a huge mismatch, one of the worst fights I have ever seen.[/QUOTE]It did turn out to be one sided, but I don't hate on Spence for that! Canelo fought Khan, GGG fought Brook,…

What skills. He just overwhelmed a fat Garcia with workrate from far away. Worst performance of Spence’s career, didn’t show sht, just looked weak and got exposed for not knowing how to feint and set things up outside of punch…

[QUOTE=Bronx2245;20082108]That "Lightweight" was also former "Jr. Welterweight" Champion less than a year before he fought Spence! Don't forget Mikey beat Broner and Lipinets at 140! Also remember it was Mikey who asked for the fight![/QUOTE] Yes, that is all true.…