Spence: Brook Definitely Is Damaged Goods; Crawford Did What He Was Supposed To Do

Errol Spence Jr. thinks Terence Crawford did exactly what he was supposed to do to Kell Brook.

The unbeaten IBF/WBC welterweight champion praised Crawford’s performance against Brook, but he figured Crawford would beat Brook convincingly. Crawford rocked Brook with what Crawford called a right hook early in the fourth round and finished off the former IBF champ soon thereafter November 14 at MGM Grand Conference Center in Las Vegas.

“I think he did what he was supposed to do,” Spence told BoxingScene.com. “Kell Brook looked like his eye was swelling up from like the first, second round. He kept rubbing it and things like that. I mean, great shot [by Crawford]. I think Kell Brook need to retire or move up [in weight]. But, you know, it was a great shot.” 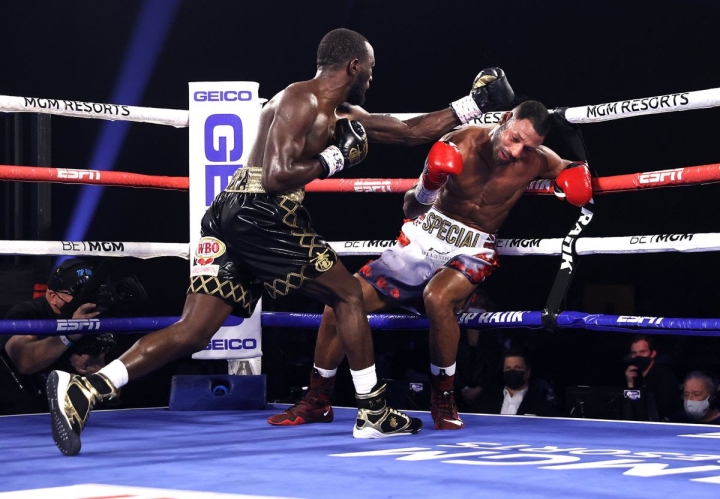 The 34-year-old Brook (39-3, 27 KOs) led Crawford (37-0, 28 KOs) on two scorecards entering the fourth round of their scheduled 12-round fight for Crawford’s WBO welterweight title. Crawford trailed by the same score, 29-28, on the cards of judges Dave Moretti and Benoit Roussel, whereas judge Patricia Morse Jarman had Crawford ahead, 29-28.

Spence previously knocked out Brook in the 11th round of their fight for Brook’s IBF 147-pound championship in May 2017 at Bramall Lane, an outdoor soccer stadium in Brook’s hometown of Sheffield, England.

Brook suffered a fractured left orbital bone during his loss to Spence. In his previous fight, middleweight champion Gennadiy Golovkin broke the orbital bone around Brook’s right eye on his way to a fifth-round, technical-knockout win in September 2016 at O2 Arena in London.

Most boxing fans and media want Crawford to face Spence in 2021 if Spence defeats Danny Garcia on December 5 in Arlington, Texas. The 30-year-old Spence (26-0, 21 KOs), of DeSoto, Texas, will defend his two titles against Philadelphia’s Garcia (36-2, 21 KOs) in a FOX Sports Pay-Per-View main event from the Dallas Cowboys’ AT&T Stadium.

“I feel like it could happen,” Spence said when asked about boxing Crawford if he beats Garcia. “It’s something I’m not worried about at all, because, I mean, it hasn’t been put on the table or anything like that. So, I’m just focused on the Danny Garcia fight, you know, me coming back from my car accident. You know, I can’t focus on stuff in the future. I’m a hundred-percent focused on Danny Garcia.”

[QUOTE=Doubledagger;20930023]If Thurman was the WBA champion in 2015 then Ugas and Rocky fielding were champions at super middleweight and welterweight respectively. [B]I can't believe I'm talking to a supposed boxing fan who doesn't even know the difference between the WBA…

[QUOTE=Mister Wolf;20931552]I'm glad you talking him up. I'm going to hold you to that.[/QUOTE] I don't need to talk the guy up. NOBODY has dominated Shawn Porter or even seriously hurt him. That's why I want Crawford to take that…

[QUOTE=revelated;20931370]Same thing y'all said about what Spence was going to do. We saw what happened. At some point, you and everyone else on NSB will stop underrating Shawn Porter, and realize that he's the Marvin Hagler of the modern 4…

[QUOTE=Mister Wolf;20931271]And you gonna finally see Shawn Porter wild swinging lighting punching ass get battered. Hopefully you stop fronting on Crawford after the beatdown he delivers.[/QUOTE] Same thing y'all said about what Spence was going to do. We saw what…