The lightweight from Philadelphia was on standby, preparing to weigh in moments later, just in case he needed to replace Pauldo or Rolando Romero in the opener of Showtime’s tripleheader Saturday night at Mohegan Sun Arena. Once Sparrow realized Pauldo weighed in at 138.6 pounds for his 12-round, 135-pound title fight against Romero, Sparrow suspected that there was a good chance he would actually fight the next night.

Romero still wanted to battle Pauldo, who returned to the scale a pound heavier barely more than an hour later. Mike Mazzulli, director of the Mohegan Tribe Department of Athletic Regulation, eventually pulled Pauldo (14-1, 7 KOs, 1 NC) out the bout because the Houston resident failed his pre-fight physical following his second unsuccessful attempt to make weight.

Enter Sparrow, who suddenly has an opportunity to knock off an undefeated opponent in a televised fight.

“We didn’t come out here as a replacement,” Sparrow told BoxingScene.com. “We came out here because we’re ready to fight. We came out here to take advantage of the opportunity that was presented to us, and that’s what we plan on doing [Saturday] night.”

Sparrow weighed in at 136 pounds Friday, one above the lightweight limit, but within what was allowed according to his contract. Romero, who weighed 134.2 pounds, won’t defend the WBA interim lightweight title he won five months ago against Jackson Marinez because Sparrow isn’t ranked in the top 15 by the WBA (Pauldo is rated 13th).

The 27-year-old Sparrow (10-2, 3 KOs, 1 NC) only learned three weeks ago that he would be a potential replacement for Pauldo or Romero. He had been in the gym, though, preparing for a probable February fight that had not been secured, thus he feels prepared to take on Romero.

Despite that he accepted this challenging, 12-round, non-title fight on approximately 30 hours’ notice, Sparrow is an intelligent, skillful fighter whose boxing ability and movement could give the powerful Romero some problems. Sparrow swears, however, that he won’t attempt to strictly box the rugged Romero similar to the way Marinez approached Romero on August 15 at Mohegan Sun Arena.

“We’re not gonna box,” Sparrow said. “We’re walking straight to him. It’s not for show. It’s no secret. I’ve been in the game a long time. He has problems going back and he has problems with people boxing him. I feel like it’s gonna be easier [to walk straight to him]. We’re going for the knockout, so we’re gonna step to him. We’re not gonna give him no space. The first two rounds, we’re gonna see what he got, test him, work off the jab, and then after that, we’re ready to bring the fight to him.” 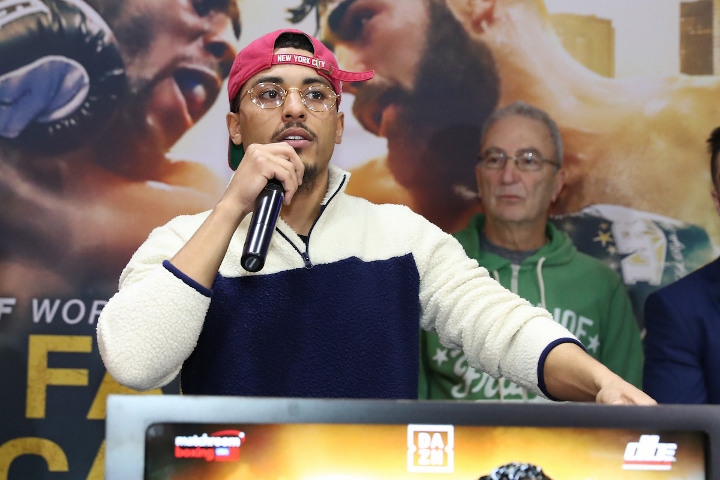 That type of aggression could prove to be a dangerous strategy for Sparrow, yet he is confident he can knock out a favored fighter who is promoted by Floyd Mayweather’s company.

“It would be a hell of a story, but it’s not something too far-fetched,” Sparrow said. “Rolly, he does make a lot of mistakes. He does have a style that’s very beatable. I believe he lost his last fight. I didn’t think it was close at all, but you know the politics of boxing. It’s understandable.”

The 25-year-old Romero’s controversial victory over Marinez drew plenty of criticism from fans and media. Judges Glenn Feldman (116-112), Frank Lombardi (118-110) and Don Trella (115-113) all scored their 12-round, 135-pound title fight for Romero, who insists that he definitively defeated Marinez.

If Sparrow suffers a similar fate, he is confident he’ll still benefit from how he performs. Despite officially losing to Romero (12-0, 10 KOs), Marinez (19-1, 7 KOs) secured a fight against former IBF lightweight champ Richard Commey (29-3, 26 KOs) that ESPN will televise February 13 from MGM Grand Conference Center in Las Vegas.

“The world is watching,” Sparrow said. “I believe in my last fight against [Abraham] Nova, I had six, seven rounds in the bank, and it was a 10-round fight. And the politics of boxing caused me to get a loss. But we’re prepared. The thing about it is we don’t wanna go to the judges this time. So, we are gonna step on the gas. But the world is watching.”

Sparrow, whose only previous loss was a disqualification defeat in October 2015, intends to capitalize on this sudden opportunity in his first fight since Nova beat him. Had Romero-Pauldo proceeded as scheduled, Sparrow would not have fought Saturday night.

That possibility never altered how Sparrow prepared the past three weeks.

“From the day that we got the call, we trained like we were fighting for a world title,” Sparrow said. “Leading up to the days of the event, we still proceeded the same way, as if we were gonna fight for a world title. It’s unfortunate that it was at 136, because I could’ve made 135. But the contracted weight said I could come in at 136, plus one. But I could’ve made 135 very easily, so it could’ve been a title fight. But it’s still gonna be a good victory for me, and hopefully it’ll put me in position for a mandatory title shot against somebody.”

Romero-Sparrow will open Showtime’s three-bout broadcast, which will begin at 9 p.m. EST and 6 p.m. PST.