Sor Rungvisai Wants Estrada Rematch Next - Not a Voluntary

World Boxing Council President Mauricio Sulaiman has revealed that despite having the opportunity to make a voluntary defense against any of the top 15 ranked contenders in the division, WBC super flyweight champion Srisaket Sor Rungvisai, maintains the intention of having a direct rematch against Juan Francisco Estrada.

This past February, at the Forum in Inglewood, California, Rungvisai won a close twelve round majority decision over Estrada to retain his world title and continue his hot string of victories against top level opponents.

Last year, the hard puncher from Thailand secured back to back wins over then pound-for-pound king Roman 'Chocolatito' Gonzalez. 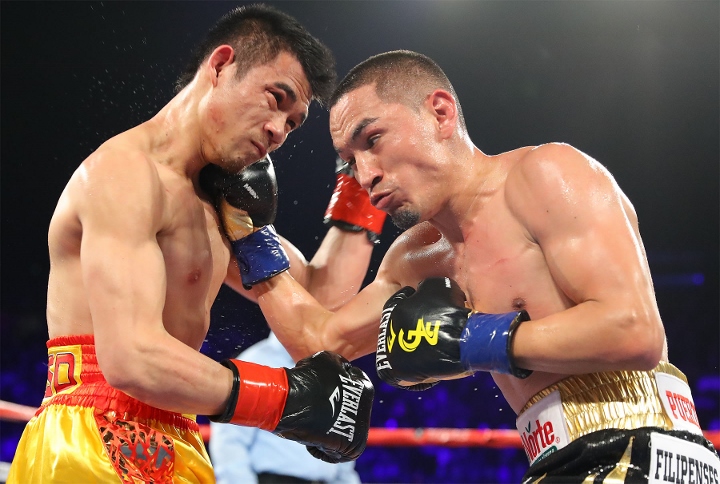 Sulaiman met with Sor Rungivisai, who said he was more interested in a rematch with Estrada than making a voluntary defense.

"I had the opportunity to speak with Srisaket in Thailand, where we gave him the recognition for his performance in 2017, and there he told us that the fight he wants is the rematch with 'Gallo' Estrada," Sulaiman said to ESPN Deportes.

"He has the possibility of making a voluntary defense wherever he wants, but he has expressed his desire to face Estrada again, and they have even contacted promoter Tom Loeffler to explore that possibility. They told us the fight could happen between September and November."

Up until a few days ago, it was mentioned that Mexican promotional company Zanfer was thinking about making a rematch between Estrada and former world champion Carlos 'Príncipe' Cuadras for the month of July. However, in the face of the problems that occupy Cuadras, with respect to him entering rehabilitation for substance abuse, that battle has been cast aside.

Loeffler, first with K2 Promotions and now with 360 Promotions, has been very successful with the events called Superfly, which are televised on HBO. The next Superfly event is slated for October.

[QUOTE=Bluebird;18762726]No, Horn is not a bum but he’s not an elite boxer either, he’s a B- boxer who likes to use headbutts, elbows and headlocks to gain an unfair advantage in a boxing match. [/QUOTE] Which could also be used…

[QUOTE=revelated;18762572]Don't duck the question. You're saying Crawford is about to fight a bum, rather than fight elite competition. Right?[/QUOTE] No, Horn is not a bum but he’s not an elite boxer either, he’s a B- boxer who likes to use…

What a difference with González that ducked Estrada so bad [QUOTE=SkillspayBills;18754886]How can you not be a fan of this man? All he wants to do is get it on with everyone that's a beast in his division. And rematch them…

[QUOTE=Bluebird;18762132]Of coarse not, he will get the WBO belt first[/QUOTE] Don't duck the question. You're saying Crawford is about to fight a bum, rather than fight elite competition. Right?