Promoter Fernando Beltran of Zanfer Promotions revealed that negotiations are underway to finalize the rematch between Srisaket Sor Rungvisai of Thailand and Juan Francisco 'Gallo' Estrada of Mexico, for a date in April at a venue in California. The contest would be carried by the DAZN streaming service.

The fact that the fight will be distributed by DAZN is because Rungvisai signed a promotional agreement with Eddie Hearn's Matchroom Boxing USA and in turn aligned himself with DAZN as well. The details of Rungvisai's first fight in this new chapter of his career will be released soon, but it is clear that Estrada is option A.

"Probably the rematch is April 6, we hope to see the Thai in Los Angeles and yes, most likely it is on DAZN," said Fernando Beltrán to ESPN Deportes, during the award ceremony of the National Boxing Commission for WBO world super welterweight champion Jaime Munguía. 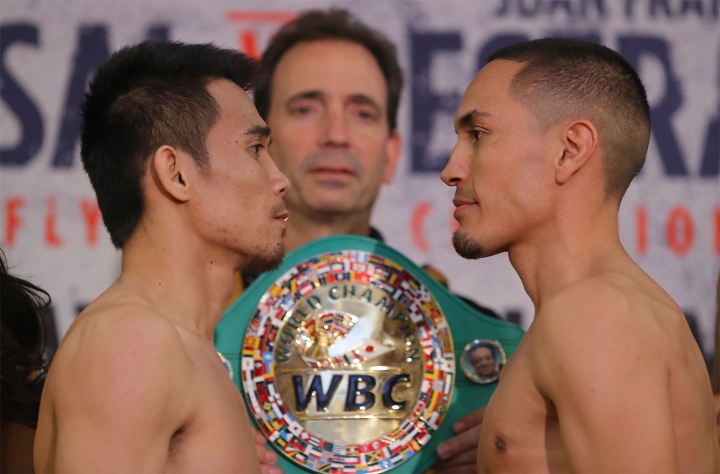 Sor Rungivisai and Estrada fought in a very exciting twelve round rumble in early 2018, on HBO. The rematch was discussed for the fall, but HBO made a decision to eliminate boxing programming - and Sor Rungvisai stayed busy with optional defenses overseas.

The World Boxing Council has ordered Sor Rungvisia and Estrada to face each other in a mandatory bout.

Additionally, Beltran said that his WBO super bantamweight champion Emanuel Navarrete will make the first defense of his world title on a date in April.

Beltran highly doubts Dogboe will want an immediate rematch and is likely going to pursue an easier fight and then maybe a rematch. Although if Dogboe wants to fight in April, the Mexican champion would have no problem in granting him the opportunity, says Beltran.

[QUOTE=KTFOKING;19476237]Oh word? Cuadras never had a chance? What the hell are you talking about? Brotha, I'm an Estrada fan like you, but you are getting carried away, especially with your last paragraph lol. Estrada definitely didn't beat Chocolatito. Don't be…

[QUOTE=KTFOKING;19477212]He was being out hustled by Cuadras but yeah, he was being patient as usual. But he just is a bit too patient in these types of fights. He needs to go for it earlier in the rematch and try…