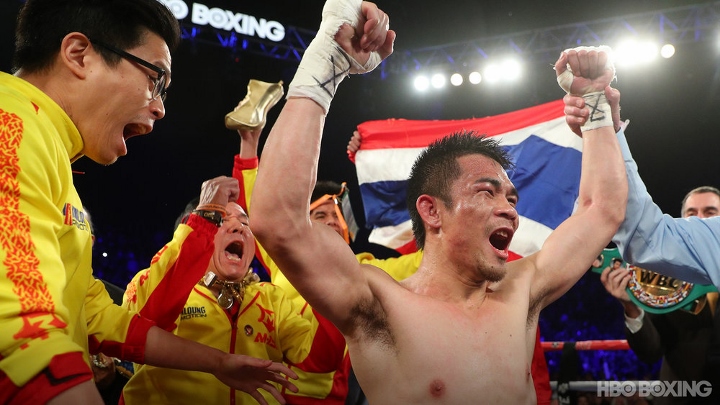 The main event of HBO’s first “SuperFly” card, Sor Rungvisai’s fourth-round knockout of Gonzalez in their rematch September 9 in Carson, California, was watched by a peak audience of 835,000 viewers and an average audience of 796,000. That tripleheader benefited from the allure of the second bout between Sor Rungvisai and Nicaragua’s Gonzalez (46-2, 38 KOs), who was widely recognized as boxing’s pound-for-pound king before Sor Rungvisai scored a controversial majority-decision victory over him March 18 at Madison Square Garden.

Ratings for this “SuperFly 2” telecast were comparable to HBO’s first boxing broadcast this year. The main event of that “Boxing After Dark” doubleheader, Argentine welterweight Lucas Matthysse’s eighth-round knockout of Thailand’s Tewa Kiram, attracted a peak audience of 769,000 and averaged 719,000 viewers.

The opener of HBO’s “Boxing After Dark” tripleheader Saturday night, Donnie Nietes’ seventh-round technical knockout of Juan Carlos Reveco, drew a peak viewership of 533,000 and an average audience of 432,000.

[QUOTE=boxingitis;18529515]We can talk about anything we want. If u have problem leave or don’t read the comments.[/QUOTE] Still here. Not going anywhere.

[QUOTE=JcLazyX210;18527560]And you're point is? Matter of fact keep it to your self. My point in my last statement was about, eat what the fck u want. Why I would I care if you don't believe in God? what would I…

[QUOTE=bluebeam;18527576]that's sounds about right to me. that's a 60-40 split. canelo 5 million golovkin 3 million not including ppv sales, just guarantees[/QUOTE] their guarantees were MUCH MUCH higher than that.

[QUOTE=Lowpez831;18526171]While they are certainly underpaid, I can assure you that each boxer received a lot more than was reported. Neither promoters nor the boxers are under any legal obligation to provide accurate purses to the State Athletic Commission. I believe…