Smith On Facing Salamov-Vlasov Winner: I Was Told Alvarez Was Championship Fight

Joe Smith Jr. senses he has successfully navigated the most treacherous part of his path toward winning the WBO light heavyweight title.

The heavy-handed contender doesn’t know anything about Umar Salamov or Maksim Vlasov, both of whom he’ll start studying soon. Those that are familiar with those Russian contenders have informed Smith that neither of them are as formidable as Eleider Alvarez, the former WBO champion Smith knocked out in the ninth round Saturday night at MGM Grand Conference Center in Las Vegas.

Smith’s victory secured his spot in a fight against the Salamov-Vlasov winner for the vacant WBO 175-pound title.

“I don’t know much about them, but from what I hear, this was the championship fight,” Smith told BoxingScene.com, referring to his defeat of Alvarez. “But, you know, now I’m looking forward to bringing that belt home.” 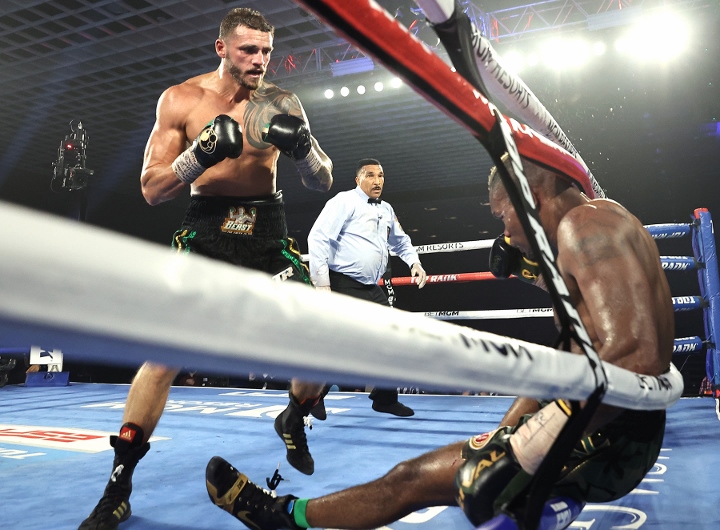 The bout between Salamov (25-1, 19 KOs), who is ranked number one by the WBO, and the second-ranked Vlasov (45-3, 26 KOs) has not yet been scheduled. Though they’re not as accomplished as Alvarez, neither Salamov nor Vlasov has ever been knocked out.

“I’ll start studying them and I’ll prepare for [the winner] as if I was preparing for anyone else,” said Smith, who won a WBO eliminator against Alvarez. “They’re great fighters, they’re here and they’re getting an opportunity at a title shot as well. And I know they’re coming hungry, whoever it is, and I’m gonna come hungry, too, and I wanna bring home that belt.”

Defeating Alvarez as convincingly as he did might’ve amounted to the most impressive victory of Smith’s 10-year pro career.

The Mastic, New York, native’s career changed for the better when he knocked out Bernard Hopkins in the eighth round of their December 2016 fight in Inglewood, California. Hopkins was 51 when he fought Smith, though, and the legendary former middleweight and light heavyweight champion hadn’t boxed in two years, not since Sergey Kovalev soundly defeated him by unanimous decision in November 2014 in Atlantic City, New Jersey.

By knocking out the 36-year-old Alvarez (25-2, 13 KOs), he became the first opponent to stop the Colombian-born boxer inside the distance.

Alvarez’s only previous loss was a unanimous-decision defeat to Kovalev in their 12-round rematch in February 2019 in Frisco, Texas. Montreal’s Alvarez knocked out Kovalev in the seventh round of their first fight in August 2018 in Atlantic City.

“I seen I hurt him a few times, but I didn’t wanna keep looking for the knockout, because I know he’s a very tough guy,” Smith said. “I didn’t wanna burn myself out, so I just tried to relax here and there, just move around and catch a breath. Then I picked it up. When I landed a nice jab, I tried to land a big shot behind it. It worked out and it got me the win [Saturday night].”

Joe Smith is looking better and better as he gains experience. He's got that engine and will be a world champ. He will be in some big fights in the future.

Both will be tough opponents for Smith but Salamov will be the easier of the two, he’s very hittable and slower than Joe! Joe takes him out in 7 Vlasov is the one that will trouble Smith cuz of his…

[QUOTE=Clegg;20724408]That was Glazkov, who seems to have disappeared ever since that fight/injury[/QUOTE] Thanks Clegg. Sent you a green k

[QUOTE=Clegg;20724696]Interesting, I remember with the Malik Scott fight there was a lot of 'wtf? isn't this guy supposed to be a lot better than that?'. Him already being limited would explain him struggling with a mobile opponent like Scott. Remember…

[QUOTE=SHOOTALLCLOWNS;20724710]chilemba? this is not the same smith who got outboxed by barrera he's improving with every fight.[/QUOTE] Oh, I agree Joe's improving fight on fight, in fact I've literally said the same in pretty much every post I made about…