Once upon a time, Don King had a flair for regularly putting stacked events on TV and stacks of cash in his boxers’ bank accounts.

Today, the well past-prime promoter boasts a flair for defaulting on purse bids and his fighters losing out on titles and paydays.

So goes the fate of Beibut Shumenov, whose third run as a cruiserweight titlist ends just as unspectacular as the previous two—conceding the strap without so much as a single successful defense. The 35-year old boxer from Kazakhstan is officially once again a former titlist, as his version of the World Boxing Association (WBA) “Regular” cruiserweight title is now in the possession of Arsen Goulamiriam, whom claimed the belt by default. 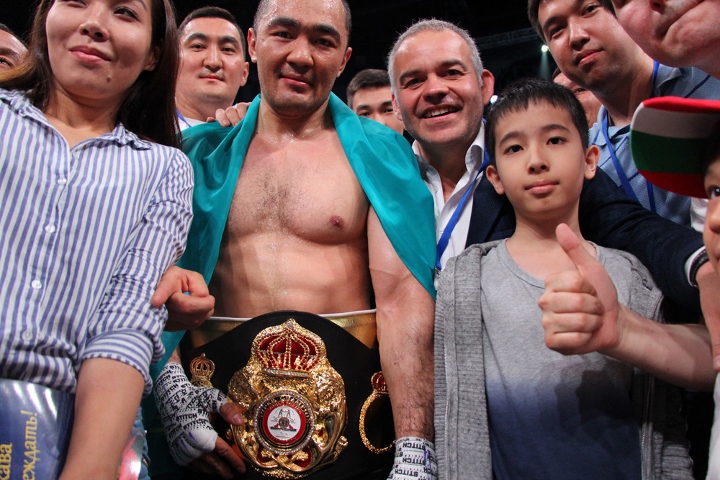 The two were due to collide in a title consolidation clash, with King putting up a massive bid of more than $820,000 this past February to secure promotional rights. The Hall of Fame promoter—who has long ago watched the game pass him by—vowed to stage the event in Shumenov’s homeland, hailing it the “Thrilla in Kazakhstan” and promising to use the show to help promote peace and unity.

The event was due to take place in mid-May. It instead became a charitable cause, as King’s inability to stage the show helped give away his fighter’s title to Goulamiriam (24-0, 16KOs), a 31-year old Armenian cruiserweight who now lives and trains in Big Bear, Calif.

Goulamiriam had hovered near the top of the WBA 200-pound set as a “Gold” titlist, which is a fancy alternative to his—and other “Gold” belt claimants—status as a mandatory challenger. He hasn’t fought since a 9th round stoppage of Mark Flanagan last October in his adopted homeland of France, where he has spent the bulk of his pro career.

He now becomes first in line for recently dubbed “Super” cruiserweight titlist Denis Lebedev, whom was bestowed such honors following the title vacancy of World (lineal) champion Oleksandr Usyk, whom is eying a heavyweight run.

As for Shumenov (18-2, 12KOs), what the future holds for the former two-division titlist isn’t immediately clear.

The 35-year old boxer—who lives and trains in Las Vegas—has fought just three times in the past five year. An eye injury prompted him to retire in 2017, following multiple postponements of his mandated title defense versus Yunier Dorticos. He returned to the ring last July, scoring a 9th round stoppage of unheralded Hizni Altunkaya in a bout which inexplicably carried WBA title sanctioning.

Shumenov is now reduced to “Champion in Recess”, which grants him a title shot any time he so chooses to pursue one. For his sake, he better hope another promoter besides his own is ready to pick up the tab to ensure such a fight actually materializes.

Plans for Goulamiriam’s next fight have yet to be established in light of the title upgrade.

Shumenov is good enough to give all the top CWs a handful. And maybe good enough to claim a belt again... but first he needs to sue King, get away from him, and look for an actual legit promoter. King…

[QUOTE=JcLazyX210;19787328]Now we all know Don King got money so what really happened?[/QUOTE] Couldn't find a way to make that kind of money, so chose to lose his deposit instead of a lot more, i'm guessing.

[QUOTE=MEXfistology;19787334]I don't generally like Asian chicks but that girl next to him I'd frog 😂[/QUOTE] The one on the left or the right?