Ultimately, however, Showtime’s president of sports and event programming decided distributing it would’ve required a financial commitment he wasn’t comfortable making. FOX Sports will distribute the second bout between Wilder and Ortiz, who was knocked out in the 10th round of their fight for Wilder’s WBC heavyweight title in March 2018.

“We had the opportunity to distribute the pay-per-view, but the deal didn’t make sense for us,” Espinoza told BoxingScene.com on Tuesday. “Obviously, we love Deontay Wilder and we believe Wilder-Ortiz will be an exciting fight. But we’re not gonna take disproportionate risks in order to secure it. We know the boxing market has been undergoing significant change, but that’s not unprecedented. Over the years, we’ve seen a lot of newcomers enter the sport and try to change the marketplace. But we were here before that, we will be here after that and continue to thrive by making smart, strategic choices at the right times.”

Espinoza referred to FOX Sports and DAZN becoming competition for Showtime over the past year. Like Showtime, FOX has a multi-year deal to televise fights for Al Haymon, the powerful adviser who runs Premier Boxing Champions. 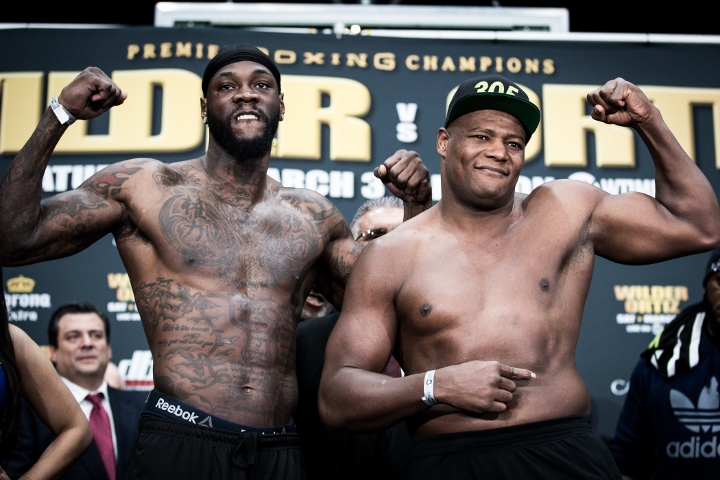 “Whether it’s sports or entertainment, there are times when you have to pass on a certain deal – whether it’s a film or TV series or sports rights,” Espinoza said. “And sometimes the best deals are the ones you don’t make. That can be disappointing, when you have to let a fight go somewhere else, but that’s the nature of the beast. We’re disappointed, of course, because of our long relationship with Deontay. But we’ll continue to focus on delivering the best boxing on TV for subscribers and delivering, when the time is right, the sport’s biggest pay-per-views, like we’ve been doing.”

Wilder and Fury have signed contracts for a rematch tentatively scheduled for February 22. Wilder would have to defeat Ortiz again to make a second Fury fight a reality.

Espinoza declined to discuss the possibility of Showtime distributing the Wilder-Fury rematch along with ESPN, with which Fury has an exclusive deal. He did assure anyone predicting Showtime’s demise in the boxing business that the network remains firmly committed to televising the sport.

With money freed up that would’ve gone to marketing, production and other costs involved in distributing a Wilder-Ortiz rematch, Showtime will now offer an additional “Showtime Championship Boxing” broadcast before the end of what has been a challenging 2019 for the network.

The date for that third “Showtime Championship Boxing” telecast hasn’t been determined. Showtime already has such shows scheduled for October 26 and December 7.

Including “ShoBox: The New Generation” and “Showtime Special Edition” broadcasts, Showtime will air seven boxing shows within the final three months of this year.

“We’ve been in this sport a long time,” Espinoza said. “We understand this sport as well as anyone. We have the best production. We have the strongest announcer team. We know the business and we know how to make the biggest fights, and we’ve done more of the sport’s biggest fights than anyone else. And we didn’t become the industry leader and the sport’s longest-running platform by taking forced risks. We became the industry leader by making smart business decisions and smart strategic decisions. That’s what [the Wilder-Ortiz rematch] outcome was, a principled strategic decision for the long-term strategy of Showtime boxing.”

[QUOTE=cally93;20097277]What were the offers then? Since you’re so in the know. What’s the guarantee? Why don’t you use your brain for a change.[/QUOTE] I don't have to be in the know. Most of the credible reporters were saying FOX &…

[QUOTE=DARTH SILKWORMS;20096928][/QUOTE]Fox believes Wilder vs. Ortiz II will do more than Wilder vs. Fury did. Showtime disagrees. Fox was willing to put their money where their mouth was and make a large guarantee for the fight. Showtime was unable to…

[QUOTE=cally93;20096878]Of course the 100mill was legit just because Joshua got beat doesn’t mean it wasn’t there.[/QUOTE] I'm not saying it wouldn't have been there. I'm saying that because he ended up losing, Wilder was wise to turn down the DAZN…

[QUOTE=DARTH SILKWORMS;20083471]How does the cost of the fight get that high without a bidding war? Use your head for a second. FOX & SHO have been fighting over this PPV for weeks/months. SHO then goes public that they pulled out…