Showtime's Espinoza on Deontay Wilder's Options For The Fall

So with Anthony Joshua facing Alexander Povetkin in defense of his IBF, IBO, WBO, WBA titles on September 22, where does that leave WBC belt-holder Deontay Wilder (40-0, 39 KOs)for the fall?

The question was posed to Stephen Espinoza the head man for Showtime Sports before his network went on the air at the Staples Center in Los Angeles on Saturday.

He told BoxingScene.com - "If you would've asked me about eight-to-ten hours ago, I probably would've said there was three guys, now there's four," began Espinoza, who was referencing Dillian Whyte's upset of Joseph Parker earlier that afternoon.

"There's been the (Dominic) Breazeale fight, that's sort of been lurking out there for awhile. Tyson Fury seems genuinely interested but Tyson's a little unpredictable at times, to say the least. You've got three depending on what happens tonight, a (Luis) Ortiz rematch." 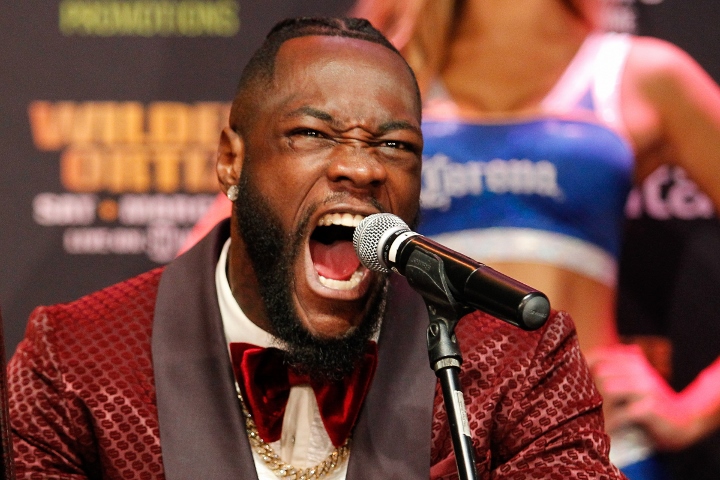 The Cuban stopped Razvan Cojanu later that night on the Showtime broadcast.

"There was a mild upset in Dillian Whyte, I don't know if I'd categorize is as a huge upset," Espinoza continued. "I thought Whyte looked as good as he has in any fight. So I think his case for Dillian's a little stronger now than it was earlier today or yesterday."

There are reports that the camps of Wilder and Fury are already discussing this match-up for a fall date.

Regardless, expect Wilder (who last fought in early March, where he had a memorable slugfest versus Ortiz) to return to the ring in the fall.

"We're looking at November, maybe December," said Espinoza, who explained, "part of that will be if it's Tyson Fury, who's fighting in August. We'll see how he looks. Breazeale, he can be ready whenever and then depending on what happens tonight with Ortiz. Probably those three-and-a-half candidates, I don't know what Eddie (Hearn) has planned for Dillian Whyte so he's a half-candidate."

Whyte fighting Ortiz has no impact.Whyte is ranked number 1 in 2 sanctions and Ortiz is only ranked in one lololol

[QUOTE=kafkod;18984424]Dillian fought Parker instead of Ortiz, and it was great fight. You might have prefered him to fight Ortiz, but I think Parker was a better and more challenging option. As for GGG, he is one of the top 10…

[QUOTE=Ake-Dawg;18984362]You understood exactly what I was referring to and it surely wasn't a complaint about the Parker Whyte fight. I'm glad you watch the fights and can tell a good fighter when you see one regardless of who he's fighting.…

[QUOTE=kafkod;18984266]Dear lord .. how old are you, Terry?[/QUOTE] Well, as a kid I remember watching Floyd Patterson KO Hurricane Jackson in living black and white.

[QUOTE=kafkod;18984329]So what are you complaining about? Whyte vs Parker was a great fight![/QUOTE] You understood exactly what I was referring to and it surely wasn't a complaint about the Parker Whyte fight. I'm glad you watch the fights and can…