Shishkin: I Want Canelo, Benavidez, I Want The Champions Next

WinnaVegas Casino in Sloan, Iowa - With Tyson Fury’s trainer Sugarhill Steward from the famed Kronk Gym in Detroit working his corner, the 28-year-old fast-rising Vladimir Shishkin (10-0, 6 KOs) won for the second consecutive time on ShoBox in a battle of unbeaten fighters as he dominated Ulises Sierra (15-1-2, 9 KOs) of San Diego, Calif. The 10-round super middleweight bout was scored in favor of Shishkin 100-90 and 99-91 twice.

Shishkin said afterwards that he fought with an injured left bicep and left elbow.

“It was a much tougher fight than I thought it would be because I fought with one hand for most of the fight,” he said. “I was surprised he could take my punches, but I couldn’t move his hand out of the way with the left to hit him with the right. That affected me a lot because I use that a lot.”

He added: “I want Canelo (Alvarez). I want (David) Benavidez. I want the champions next. I am ready for the next level. With Sugarhill in my corner I am ready for anyone. Even with one hand.” 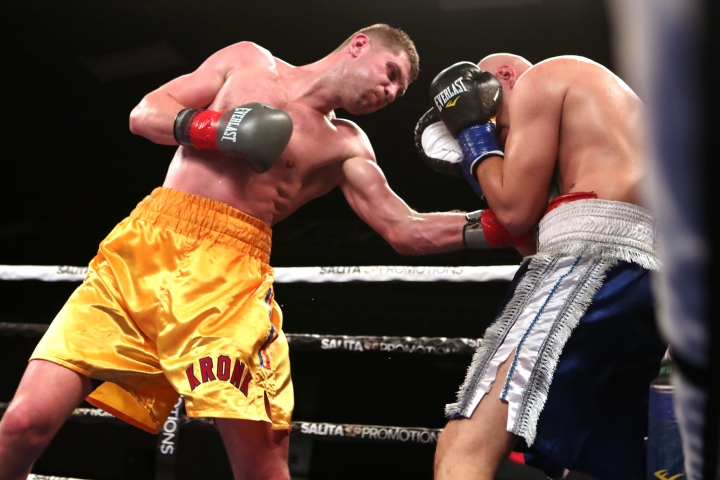 Steward is the nephew of the legendary trainer Emanuel Steward.

“I thought all the Detroit guys did great,” Sugarhill Steward said.

“They all got good experience on television. That’s a factor that some fighters don’t take in to consideration. When they get on television, they don’t know how to handle it. You have to be used to being on a stage like this and I’m happy with the way they all performed. All the guys from Detroit stepped up on television to further their careers. I’m very happy all-around.”

Sierra didn’t have an answer for Shishkin’s body shots as Shishkin connected on 65 body shots to 28 for Sierra.

“He was sharp and he was strong,” said Sierra, who became the 189th boxer to lose his undefeated record on ShoBox in the 19 years of the series. “But I was also hurt with a sprained hand a month before this fight and haven’t hit the bags since then.”

[QUOTE=AKAcronym;20332788]Gonna have to call him Shishkabob if he goes against any of those guys. He ain't ready.[/QUOTE] Ha!!! Classic!! lmao! Exactly!! He should go for some top contenders first.. He's not ready!! Benavidez will eat him up!

Gonna have to call him Shishkabob if he goes against any of those guys. He ain't ready.

Not ready, he may have to wait till Benavides or Callum Smith moves up, don’t even dare mention Canelo or Plant in this! Nothing special about him!

He is a decent fairly well rounded fighter but he is not very fast or hits very hard and and not hard to hit so I dont think he is or ever will be ready for the top level Benavidez,…