It’s been more than a month since his Fight of the Year contender with Errol Spence, but time still hasn’t removed the dissatisfying taste of defeat for Shawn Porter.

The now-former two time welterweight titlist came up just short in his title unification bout with Spence, suffering a split decision defeat in their Fox Sports Pay-Per-View headliner in Los Angeles, California. Porter won by a score of 115-112 on the card of judge Larry Hazzard Jr., which was overruled by matching tallies of 116-111 turned in by judge Steve Weisfeld and Rey Danseco.

“When I heard split decision, I thought for sure it was going to be a draw,” Porter admitted (30-3-1, 17KOs) admitted during a recent installment of FS1’s InsidePBC Boxing, on which he serves as a series expert analyst. “That’s where my mind was going. I didn’t think there was no way he was going to win based on a split decision. There’s where I’m at a month away from the fight.” 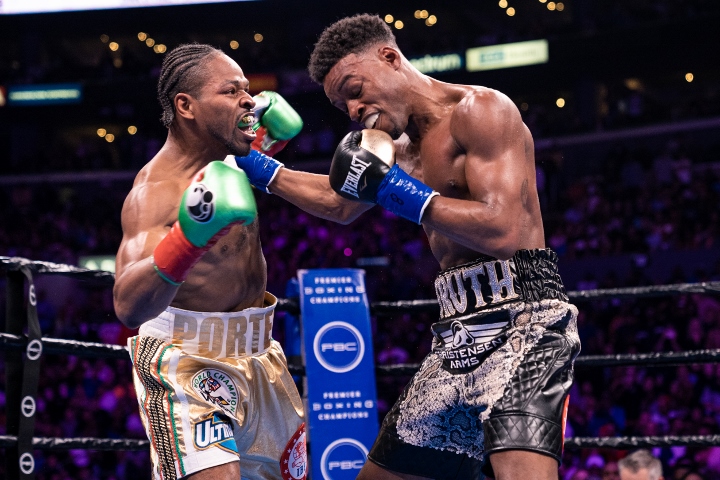 Most observers had the fight somewhere in the middle, with the 11th round knockdown aiding Spence’s cause in a fight perceived as that close up to that point. A perfectly placed left hook by Spence (26-0, 21KOs) caused Porter’s legs to buckle, doing his best to remain upright but ultimately touching his glove to the canvas which was correctly ruled a knockdown by well-regarded referee Jack Reiss.

The sequence brought back flashes of Porter’s hard-fought June 2016 loss to then-unbeaten titlist Keith Thurman. In yet another memorable welterweight fight, Porter managed to avoid an official knockdown but was buzzed in the early rounds before recovering and dragging Thurman into deep waters the rest of the way.

“I guess it was about the same,” Porter stated in comparing his mindset between the most dangerous moments of each fight. “There was one round where Keith Thurman caught me with a shot like that, and I just had to fight through it. All up until that 11th round, I was feeling good.

“(The knockdown) was definitely a moment where I was gone and right back Just one of things you really can’t decide. I knew the moment my hand touched the canvas the ref was going to start counting.”

Even in defeat, the outcome hardly affected Porter’s standing among the welterweight elite.

“Everyone says—and I agree—if Shawn Porter wasn’t in that fight, it wouldn’t have been the same fight,” insists the Las Vegas-based, Ohio-bred boxer, who recently celebrated his 32nd birthday. “I’m a dictator, I control the ring. That’s what I went in there and did.”

He got knock down versus Ugas and they didn't counted. He has two very tough fights in a row. Very good fighter.

Porter is a exciting fighter and I hope they keep giving him the opportunity to create amazing fights by passing him around to the other title holders. Even if he loses he wins because he isn't scared and lays it…

[QUOTE=megh50;20179726]Styles make fights. Spence and Porter wanted to take the fight to each other and it made for an excellent fight. Crawford is not going to fight him that way. Crawford will switch and move and tie up...make it ugly.…

[QUOTE=revelated;20177274]This is the correct answer.[/QUOTE] Styles make fights. Spence and Porter wanted to take the fight to each other and it made for an excellent fight. Crawford is not going to fight him that way. Crawford will switch and move…