Shawn Porter On Errol Spence's Power: I Have A Proven Chin

Shawn Porter wonders whether Errol Spence Jr. is trying to convince himself he can knock out Porter. (photo by Ryan Hafey)

Porter’s chin has been one of his most obvious assets during a pro career that’s in its 11 year. His two losses were 12-round decision defeats to Kell Brook, who beat him by majority decision in August 2014, and Keith Thurman, who narrowly won a unanimous decision over Porter in June 2016.

The rugged Porter’s durability hasn’t stopped Spence from predicting he’ll become the first fighter to knock out the WBC welterweight champion when they meet September 28 at Staples Center in Los Angeles.

“You know what? I’m not surprised to hear him say he wants to knock me out,” Porter said Tuesday on a conference call. “He’s even said, ‘I’m going to knock you out.’ I’m not surprised to hear him say that because I know his mentality. I know who he is as a person. He’s very, very driven and competitive, and I get that. The part about it for me is he may be trying to psych himself [up], into thinking he can do it.” 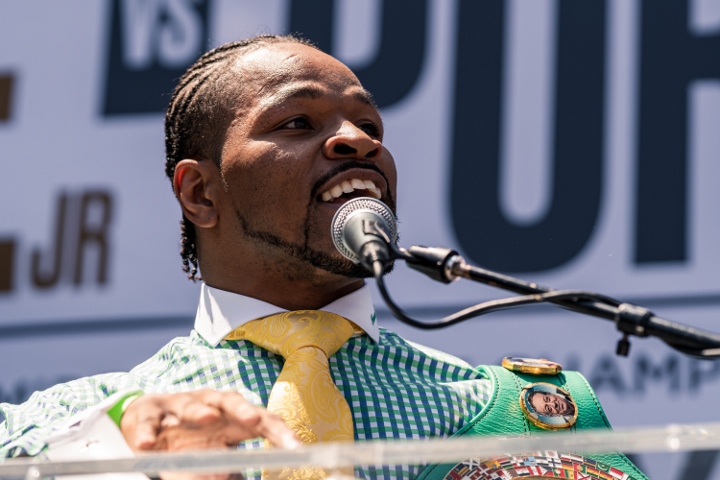 Porter promised that’ll be far easier said than done, even for a big, strong southpaw such as Spence.

“I think I have a proven chin,” Porter explained. “I’ll go on record for saying no fighter really wants to prove his chin. You know, we never wanna get hit, get hurt or anything like that. But, you know, I’ve taken some pretty good shots from some top guys out there and I’ve managed to handle that and win and come out on top.

Their 12-round fight Spence’s IBF and Porter’s WBC welterweight titles will headline a four-fight FOX Sports Pay-Per-View telecast a week from Saturday night.

[QUOTE=LZBoxing;20068538]Do you think Spence isn't rough or he can't get rough right back? Overcoming adversity baby. Both are going to have to do it to win. IMO Spence Jr is just better. He's a better boxer fundamentally. He has the…

[QUOTE=revelated;20068501]8-4? Nah. I think I had Ugas winning with a VERY tight 7-5. One round off from a draw. Anything wider is bias. It's worth a rematch but we know it'll never happen. As to his tactics: like Paulie said,…

[QUOTE=revelated;20068501]8-4? Nah. I think I had Ugas winning with a VERY tight 7-5. One round off from a draw. Anything wider is bias. It's worth a rematch but we know it'll never happen. As to his tactics: like Paulie said,…

[QUOTE=JcLazyX210;20066874]Besides that one round. He won basically the whole fight.[/QUOTE] He even dominated the rest of the round he was knocked down in.