Shawn Porter: I Can't Make Excuses, Say I Was Robbed

The former WBC welterweight champion could’ve come to the post-fight press conference Saturday night at Staples Center and claimed two judges wronged him in his split-decision defeat to Errol Spence Jr. Porter opted to address the third close loss of his career in the same manner he typically handles everything else – with complete class.

Porter praised Spence for digging deep during their 12-round, 147-pound title unification fight, taking his best shots, scoring a knockdown and leaving the ring with two welterweight titles. 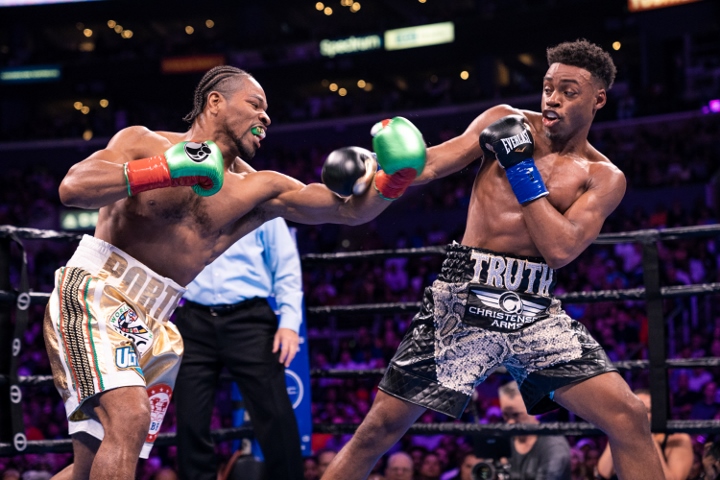 He also refused to criticize judges Rey Danseco and Steve Weisfeld, both of whom scored eight rounds for Spence (116-111). The other judge, Larry Hazzard Jr., scored eight rounds in their thoroughly entertaining, closely contested fight for Porter, 115-112.

“Listen, I’m gonna be myself, and myself says when I don’t win, I can’t hang my head when I don’t win,” Porter said. “I can’t make excuses. This was a fantastic fight tonight. I definitely have to take a look back. I felt comfortable a majority of the rounds, really. The one round I didn’t feel comfortable in obviously was the [11th] round, where my hand touched the canvas. But other than that, I felt very comfortable through this fight.

“I tried to stay poised and, you know, stay within whatever my corner was asking me to do, make the necessary adjustments, so on and so forth. So, for me to say that was a robbery, you’re not gonna hear me say it. Sorry. My dad can say it. Barry can say. Everybody else can say it. But that ain’t gonna come from me.”

Porter (30-3-1, 17 KOs) referred to his father/head trainer Ken Porter and assistant trainer Barry Hunter. Spence (26-0, 21 KOs) and his trainer, Derrick James, are certain he earned a win, but they also acknowledged Porter tested the IBF/WBC champion unlike any of his 25 previous opponents.

“I felt like I won,” Spence said. “Like I said, it was a tough fight. And then when I got the knockdown, where I initially went in to try to score the knockout – like I said, if I get him hurt, I’m gonna try to jump on him. But like I said, he has a lot of heart. And he always comes to fight. He’s a true warrior and, you know, he came back swinging. So, you know, I didn’t expect nothing less [than] for him just to stand his ground and try to fight back after I hurt him and scored the knockdown.”

A flawless left hand by Spence buckled Porter’s knees and made him touch the canvas with his left glove, which counted as a knockdown with exactly one minute remaining in the 11th round. Porter responded by waving Spence forward and going toe-to-toe with the strong southpaw for the rest of the 11th round.

“We put on a fantastic performance tonight,” Porter said. “I’ll thank him again and again and again. He did a fantastic job. But I just want y’all to know that ain’t nobody ever gonna go at him the way I went at him. And y’all just saw it.”

[QUOTE=Rigpig;20094841][COLOR="Red"][B]Seemed like the winner of this fight was pre-determined with all the hype around Spence[/B][/COLOR]. Anyone who knows boxing knew Porter wasn’t gonna get mowed over. I felt he deserved the W based on the fact he landed the better…

[QUOTE=OPS;20096410]That's not going to happen. Crawford is miles ahead of these Welterweights. Remember when sugar shane cracked Mayweather in round 2. Mayweather was able to make adjustments, and walked shane down. Ok Pacquiao cracked Thurman and kept on cracking, no…

[QUOTE=Godbody;20096551]Porter ran his mouth saying he and he alone promoted the fight. Spence replied and it got outta hand. Speak facts bro[/QUOTE] Speak facts? Yeah ok. Whatever you say Mr. One Post.

It reminded me of a Bradley PAC 1. Bradley countered PAC clean all night. Much like Spence did to Porter.

[QUOTE=apollocreed;20097412]ME: I agree bro, Shawn was a killer that night. However Errol was rolling a lot of that frenetic offense. The response from Spence was usually landing clean. That was the difference. It’s the classic illusion of Porter doing much…