Shane Mosley Jr is looking to get back into the mix in 2020, as it was announced that following his link up with Victory Sports and Entertainment, the 29-year-old has signed a co-promotional deal with Oscar De La Hoya’s Golden Boy Promotions.

Mosley Jr’s family need no introduction, with his father being one of the best pound for pound fighters of the past 30 years. Junior however is looking to forge his own path and recently relocated to Las Vegas to work under highly rated trainer Justin Gamber and world class strength and conditioner Larry Wade. 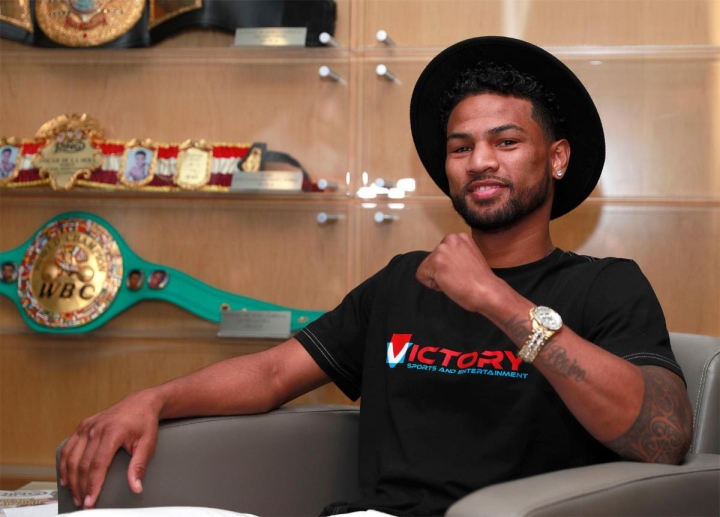 Mosley Jr opened up about working alongside Gamber and Wade.

He said, “Training with Justin Gamber has been fantastic so far. He’s really taken me back to basics and I’m becoming a far different, but improved fighter because of it. I’m really enjoying training and also working with Larry Wade is making me a far more explosive athlete which is of course helping my development inside the ring.

“I knew when I came to Vegas I had to change everything and I have done. Linking up with Mike Leanardi and Rick Torres too from a management point of view and then linking up with Golden Boy Promotions has brought new life into my career.”

Mosley Jr was due to return at Fantasy Springs on the undercard of Sergey Kovalev and Sullivan Barrera, however, due to the COVID-19 pandemic that show has unfortunately been postponed. Despite this, Mosley Jr discussed his feelings about signing a co-promotional deal Golden Boy Promotions and his career plans going forward.

Mosley Jr said, “I’m so grateful to have signed a deal with Golden Boy Promotions alongside the Tournament of Contender and I want to thank Mike and Rick at VSE along with the team at Golden Boy Promotions for putting the deal together. To be able to work with a world class outfit is truly a blessing for any boxer so I am very appreciative and excited about what the future holds.

“My plan is to move down to 154 eventually and work up from there. I believe that I can win titles in the very near future and with the adjustments I have made in and out of the ring, boxing fans can expect to see a completely new Shane Mosley Jr when I return to the ring.”

Good for jr. Sometimes it takes total change to really find out if you belong going forward.🥊

We shall see. I don’t write people off until the appropriate time.

He have his chances and fail when they put someone to look good and he lost. Maybe Shane Mosley Jr. son is going to be in Facebook watch fights or preliminaries in DAZN. Let's see what type of fighter pan…

Jr just doesn't have it. unlike connor Benn and eubank who at least have athleticism and power, jr has neither.