Shakur Stevenson: Warrington Fight Should Now Be Easier To Make

Shakur Stevenson has reacted to the news of Josh Warrington’s promotional switch with positivity.

The WBO world featherweight champion has long been touted as a potential future foe for the IBF king as he craved unification showdowns.

Warrington, the Leeds man who won the red, white and gold title back in May 2018 against Lee Selby, left Frank Warren and Queensberry Promotions on Wednesday before once again teaming up with Eddie Hearn and Matchroom Boxing. 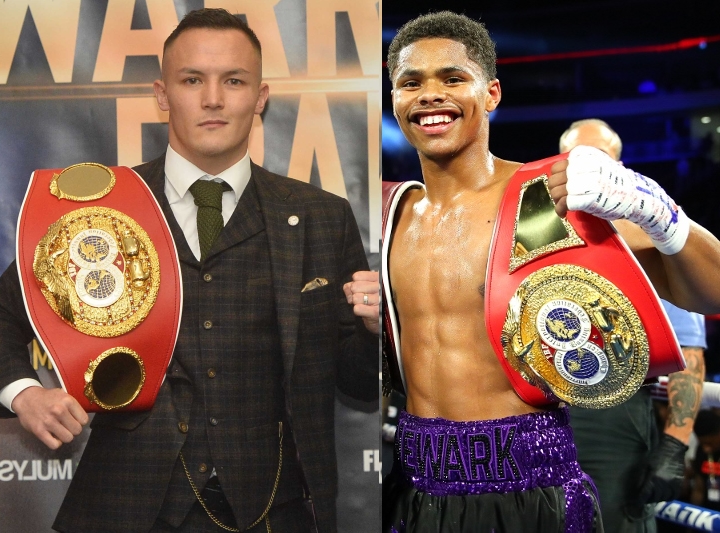 ‘The Leeds Warrior’ (30-0, 7 KOs) was most recently in action at the First Direct Arena in his home city back in October when he stopped mandatory challenger Sofiane Takoucht inside two rounds.

A showdown with Stevenson had been mooted for May in the UK, but talks had hit a snag and nothing materialised.

But the American talent (13-0, 7 KOs) has welcomed the news that Warrington is back with Hearn.

“Perfect,” he remarked on social media. “Now the fight should be easier to make. Let’s get it done, Eddie.”

Warrington has a mandatory defence about to be sprung upon him, a rematch against Kid Galahad, after the Sheffield man –– who was on the wrong end of a split decision last June –– retired Claudio Marrero in a final eliminator earlier this month at the FlyDSA Arena, as part of the supporting cast to Kell Brook’s return from a 14-month hiatus against Mark DeLuca in which he won the vacant WBO Inter-Continental super-welterweight title, while New Jersey southpaw Stevenson has a world title defence against Miguel Marriage set for March 14 at the Hulu Theater at Madison Square Garden in New York.

“It's great to be back with Matchroom, Sky and now DAZN and I'm very excited about the future,” said Warrington regarding his move. “I have enjoyed my time at BT but now I’m looking forward to going on to achieve my dreams of both fighting in the USA and unifying the division.”

That will be music to the ears of Stevenson and his promoter Bob Arum of Top Rank Inc. and Hearn has gone even further towards suggesting that the big nights are yet to come for the 29-year-old.

“We had some amazing times helping to build Josh in Leeds,” Hearn added, “and now we reunite at a time when he is the king of the division.

“Josh has some of the most loyal and passionate supporters in sport and we look forward to delivering nights they will never forget. There is so much more for Josh to accomplish and today starts a new chapter in the thrilling Josh Warrington story.”

Confusing but I think he is assuming that Eddie Hearn with DAZN will put the money up for this unification just like they did for Ramirez vs Hooker...:dunno:

It will be easier to make because Hearn will overpay with DAZN money?

Stevenson is a punk, who should be in jail for assault and trying to hit women. Beating up on defense-less people on the ground. A low life.

Frank Warren has been functioning as a sham promoter for Top Rank. If the Warrington vs Stevenson fight couldn't be made when it was in-house like that then what chance is there now that Warrington is with Eddie Hearn?

[QUOTE=People's_Champ;20385507]Look at the tweet, he was obviously being sarcastic. Hence the 🙄.[/QUOTE] Yep Perfect, Now the fight she be easier to make 🙄 Let’s get it done Eddie? https://t.co/ypjIK3ajWh— Shakur Stevenson (@ShakurStevenson) February 12, 2020…