Shakur Stevenson respects Jamel Herring as a boxer and as a man.

But business is business, and the unbeaten Stevenson wants his mandated shot at Herring’s WBO junior lightweight title next. Herring would rather face Carl Frampton in a much-discussed fight that was supposed to take place June 13 in Frampton’s hometown of Belfast.

Stevenson, who relinquished the WBO featherweight title to move up to 130 pounds earlier this year, can’t see any way that a Herring-Frampton fight should be allowed to happen next. The WBO has announced that Herring must meet his mandatory obligation against Stevenson by January.

“The WBO is ordering him to make his mandatory, and I’m his mandatory,” Stevenson told BoxingScene.com. “I can’t speak on what he wanna do. But I know that he Tweeted that if he’s not fighting Frampton in his next fight, he’s either gonna move up or retire. But I don’t know. I have no clue.” 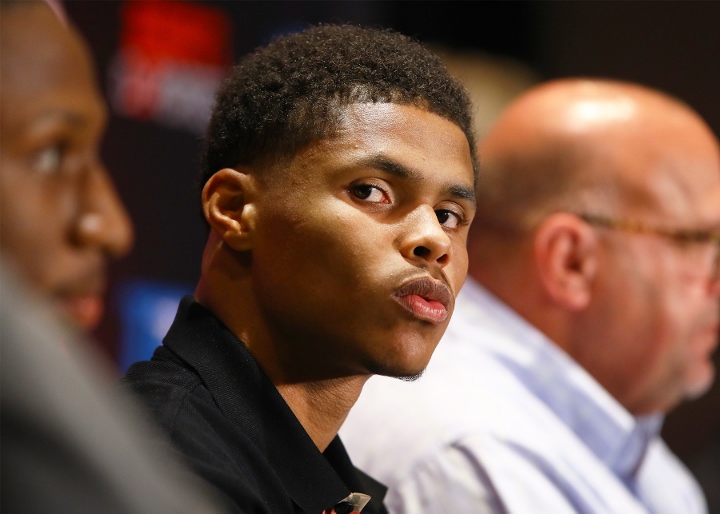 The 23-year-old Stevenson knows that he wants what he is owed next, whether it comes against Herring or another contender, including Frampton.

“It’s an opportunity to become a two-weight division world champ,” Stevenson said. “In only 15 fights, I don’t know who else has done that, especially at my age. So, I think it’s an amazing opportunity and I’m just ready to take advantage of it.”

Stevenson, a 2016 Olympic silver medalist from Newark, New Jersey, has trained alongside Herring in Colorado Springs, Colorado. The skillful southpaw also is close with Brian McIntyre, Herring’s manager and trainer, but he won’t let those personal relationships prevent him from fighting for another world title.

Josh Dubin, Stevenson’s co-manager, called for Cincinnati’s Herring (22-2, 10 KOs) to vacate the WBO 130-pound crown if the 34-year-old champion has no intention of facing Stevenson.

“We saw that Herring tried to announce a fight between him and Frampton on ESPN,” Dubin said of Herring discussing facing Frampton next following his disqualification win over Jonathan Oquendo on September 5. “If that’s what he wants to do, and that’s the only fight that he wants, what we would ask him to do is just go ahead and vacate. Because if he’s not gonna fight Shakur, there’s no reason to hold up the process of us putting together a fight for the vacant title.

“There’s no sense in stringing it along, because our position isn’t gonna change. Shakur is the mandatory. We’re not gonna ask for an exception. We’re not gonna step aside. So, there’s really only two options on the table – to vacate or to fight Shakur. And if he’s not gonna fight Shakur, then he might as well go ahead and vacate. Then, we can get a fight scheduled and he can get a fight scheduled.”

Frampton (28-2, 16 KOs) is ranked sixth by the WBO at junior lightweight, five spots below the number one-rated Stevenson.

Stevenson (14-0, 8 KOs) last fought June 9 in Las Vegas, where he knocked out Puerto Rico’s Felix Caraballo (13-3-2, 9 KOs) in the sixth round of Stevenson’s debut at the 130-pound limit. He is confident he would beat Herring convincingly, too.

“I think it would be just like any other fight,” Stevenson said. “I think I would go in there and do whatever I’ve gotta do to get the victory. I think that there’s levels, and I think that my level is higher than anybody in the 130-pound weight class. I’m just on a whole different level.”

[QUOTE=Mister Wolf;20776384]So its Arum fault if Shawn Porter turns down a mandatory title shot for his next fight. Got it.[/QUOTE]No, it's Arum's fault that Crawford is fighting Brook instead of Porter...NOW! [B]Shawn Porter caught off-guard by Bob Arum's apparent opinion…

[QUOTE=Bronx2245;20776349]Of course that's what he wants, but Arum could change all that with a blink of an eye! Plus, like I said, you had no evidence that Porter ducked a mandatory, yet you said it anyway! That never happened, and…

[QUOTE=Mister Wolf;20776020][url]https://www.boxingscene.com/shawn-porter-expects-fight-winner-spence-garcia--151698[/url] Keep in mind that Spence has been mandated by the IBF to fight their interim champ next after Garcia or be stripped. So Porter is willing to wait until after that fight and until the WBC's mandatory is…

[QUOTE=Sweden2716;20775052]Shakur hope you do not get the fight, you should be in jail you low life punk. Hitting defense-less people on the ground from behind, hitting women. Simply a pure punk from Newark.[/QUOTE] [IMG]https://reactions.gifs.ninja/r/hqg-84.gif[/IMG]

[QUOTE=Boricua181;20773878]Stevenson would knockout Herring with little to no problem. Herring isn't fast enough, or strong enough to keep up with Stevenson. No wonder Stevenson is asking for this fight to be made, he knows he would win. Herring looked absolutely…