Top Rank and Golden Boy agreed to a deal Friday and avoided a purse bid for the WBO-ordered featherweight fight between Shakur Stevenson and Joet Gonzalez, multiple sources aware of the agreement told BoxingScene.com.

Both sides agreed to have VADA testing, which was a major negotiating hurdle demanded by Golden Boy, for the vacant 126-pound title. A neutral location was also at the center of the talks, and now, the championship showdown between unbeatens Stevenson (12-0, 7 KOs) and Gonzalez (23-0, 14 KOs) will take place Oct. 26 at the Reno-Sparks Convention Center in Reno, Calif. on ESPN.

ESPN’s Steve Kim was first to report a deal between both promoters had been reached. 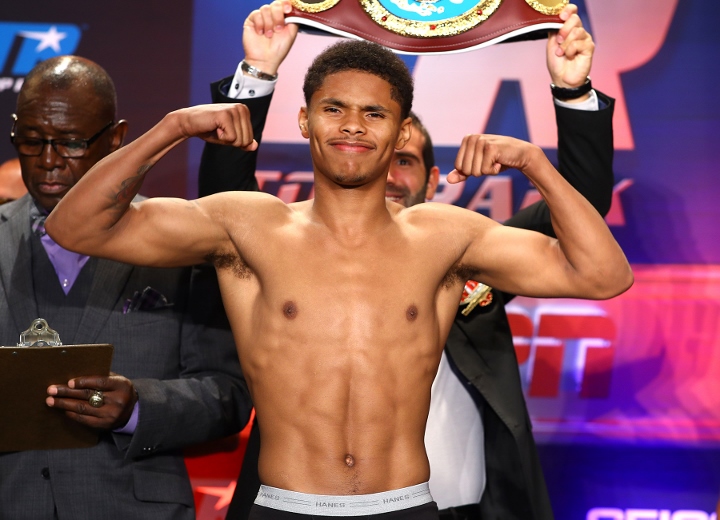 Golden Boy was pursuing VADA testing for the fight to ensure a fair playing field because in June, the WBC removed Stevenson from its rankings because the American fighter did not register for the WBC Clean Boxing Program.

“The deal has been done, and we’re satisfied on our side that VADA testing was agreed upon by both the fighters and the promoters,” Frank Espinoza, who manages Gonzalez, told BoxingScene.com. “Everyone agreed, and we don’t see a problem now. We’re looking forward to the fight … We want boxing to be a clean sport. If fighters have nothing to hide, then let them prove it.”

On Thursday, the WBO announced a purse bid made available to all bona fide promoters would take place Sept. 14 in Las Vegas, but that appointment is now officially cancelled.

As both camps squared away the paperwork, Gonzalez’s confidence appears to be fight-night ready.

“As fighters, we always want championship fights, but mine is coming at the right time. I’m excited and ready for it. This has been my dream,” Gonzalez, who has been boxing since the age of 10 for a chance to become a world champion, told BoxingScene.com.

“Shakur has never been in the ring with a fighter like me before. After a few rounds, his opponents get discouraged and let him fight the fight he wants. Not me, though. I’m going out there to win. I’m hungry. I’m going to give it my all. Shakur is good, but I don’t think he’s great as much as he says he is. He’s smart. He works the distance very well and fighters struggle to get inside to land punches on him. Everyone is high on him and pumping him up. But like I said—I’m not like any other fighter. I know I can outwork him, break him down and get the win. I’m the wrong opponent for him. If he would’ve fought someone else, maybe he could win. But it's going to be a bad night for him.”

Gonzalez is looking to build on a strong 2019 campaign in which he beat Manuel Avila in July and former world champion Rodrigo Guerrero in March. Neither fighter had been dropped or stopped before, and Gonzalez managed to accomplish both of those feats against them.

The 22-year-old Stevenson, a silver medal winner in the 2016 Olympics, has already tallied three wins this year, including a July destruction of Alberto Guevara in his hometown of Newark.

Hack Steve Kim has this fight ranked ahead of Wilder-Ortiz for best fights for the rest of 2019. Shill much Kim??? lmao

Shakur is just a level above. I expect him to win a wide decision.

If this dude can keep his act together, he could be rise to be a great star.

Shakur ain’t no drug cheat bruh. He be about boxing all day and practicing his craft on defenseless women. WYTA!