Shakhram Giyasov: I Want To Become The Best Fighter in The World

Officially, Shakhram Giyasov gets back to work on August 15 when he makes his first start in close to a year against Francisco Hernandez Rojo in Tulsa, Oklahoma.

In reality, the junior welterweight contender never stopped working after arriving in Indio, California six months ago to prepare for a fight on the April 17 card headlined by the Regis Prograis-Maurice Hooker bout.

That fight and that card never happened, and as COVID-19 shut down the boxing world, Giyasov’s teammates from Joel and Antonio Diaz’ gym left Southern California to go back to their families in Uzbekistan.

“For all this time I was here by myself because all the boys went home,” he said through translator Aliko Frolov. “I was the only one who stayed here. It doesn't make any difference for me because I'm a professional and I have a goal and a dream and I'm moving toward that goal. Being here by myself, I'm only feeling stronger. I was reading books and learning English and pretty much living the whole life here. There are other guys in camp from other countries with Joel Diaz, so I don't feel like I'm by myself.” 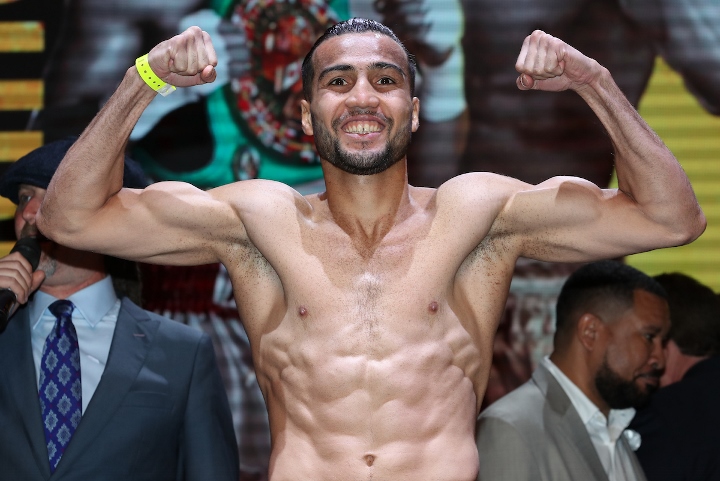 If you want mental toughness, there it is. A 27-year-old far from home in a country where he’s learning the language and the culture while training in the hardest game in the middle of a worldwide health crisis. That’s what will show up in a rough fight, when the gas tank is empty and an opponent is still charging forward at you. Having that toughness makes champions, and that’s precisely the reason why Giyasov has sacrificed so much for a lot longer than a nine-fight pro career would indicate.

“I'm living like this for the last 15 years without my family, without anyone, in different countries all around the world - China, Cuba,” he said. “I'm always in training camp, so it's nothing new for me. I love my family a lot, I miss them, but my priority is my dream and my goal, and until I reach my dream and become the undisputed super lightweight champion, I'm not gonna look in another direction. I'm not worried about anything but my goal right now. And my dream is their dream. If I achieve everything that I have in my mind, that will be good for them.”

If Giyasov walked away from the sport tomorrow, he could be proud of what he’s already accomplished, earning a silver medal in the 2016 Olympics to cap off an amateur career of over 300 fights. As a pro, he’s been perfect, 9-0 with seven knockouts, and he’s been fighting quality competition from the start, including Albert Mensah, Miguel Zamudio, Emanuel Taylor and Darleys Perez.

Next up is Rojo, who has won 10 of his last 11, with the only loss a split decision defeat to Ryan Martin in 2017. It’s not an easy task after a year on the sidelines, but that’s no issue in the mind of Giyasov.

“I'm always in camp and in shape, training even when there is no fight,” he said. “I'm always working on my drills, and I always try to stay as healthy and trained as possible. Right now, it was about a year, and I've been here for six months already and I was training these six months to perform because we were staying in four-week notice shape. Right now it's just conditioning to go that distance and, for me, it's all about the mental game. And mentally I'm prepared; I'm just preparing my body for a tough fight.”

The Mexican vet has been out of the ring even longer, as his last fight was in April 2018, but in any case, many believe that a big win by the already world-ranked Giyasov could put him in the 140-pound title conversation. That’s a conversation he’ll leave for his team to have.

“I'm not the guy who's gonna say that I'm ready or I'm not or I'm gonna jump ahead of everyone,” said Giyasov. “I have a strong team behind me, I have two of the best coaches that I'm happy with, Antonio and Joel Diaz, I have my management team of Vadim Kornilov and my promotional team (World of Boxing) behind me, so whenever they tell me that I'm ready, I'm ready. I'll never shy away from any fight. If they tell me to fight the champion tonight, I'll fight him tonight. It doesn't matter to me. I'll fight anyone, anytime, anywhere. And when my team tells me that I have a title fight, I'll be very happy for that.”

It will mean that all the work has been worth it, and though it’s often a hope that hard work eventually pays off, for Giyasov, it’s more than hope.

Interested to see him against top guys, he's really athletic and accomplished a lot as an amateur but his teammates seem to be more polished and technical

Yeah and I want to win the lottery. Dream on.