Serrano: Whatever Katie Taylor Brings, I'll Be Able To Bring It Harder

With their superfight in development for more than a year, Amanda Serrano and Katie Taylor have been given more than enough time to learn all the secrets about the other.

The pair of boxing royalty continue to work feverishly for their forthcoming superfight. The two were due to vie for Taylor’s undisputed lightweight championship on May 2 at Manchester Arena in Manchester, England. The ongoing coronavirus disease (COVID-19) pandemic forced a postponement, with a working date in place for July 4 but without fans in attendance.

Whenever the fight winds up taking place, Serrano is less concerned about who will or won’t be in the crowd. Rather, what enhances will need to be made to compensate for the 31-year old southpaw fighting in a part of the world where Ireland’s Taylor (15-0, 6KOs) will boast a significant advantage.

“Well, first I need to be mentally strong because the fight is in Manchester, in Europe,” Serrano (38-1-1, 28KOs) noted during a recent interview on Matchroom Boxing’s Peleamundo series hosted by former two-division titlist Jessie Vargas. “So it’s not just fighting on person, it’s four people. It’s the three judges and Katie Taylor.

“So, I need to have a strong mind to go in there.” 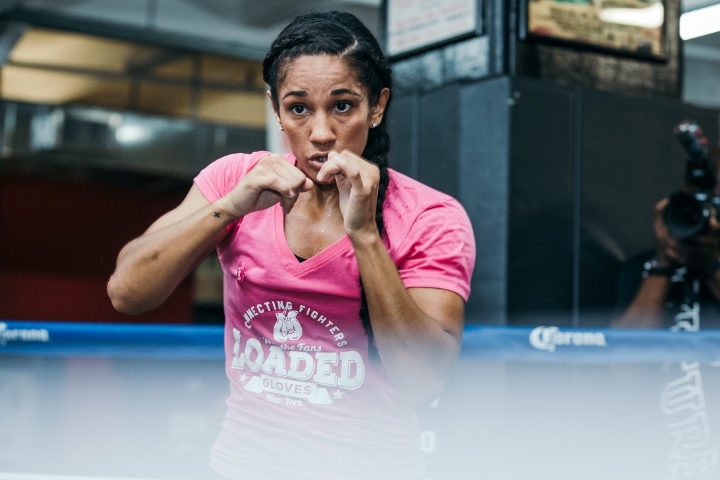 The hosting venue housed Taylor’s last fight and win, a 10-round decision over Christina Linardatou last November to claim a 140-pound title which she has since relinquished. The two-time Olympian and 2012 Olympic Gold medalist from Bray, Ireland will put her slew of lightweight belts—including the lineal championship—on the line versus Serrano, who has collected belts in more weight divisions (seven) than any female boxer in history.

Having snatched hardware from 115 all the way up to 140 pounds, it’s fair to say that adaptability has never been an issue for the Brooklyn-based Puerto Rican southpaw.

“I’m not going to tell all my secrets,” quips Serrano, who is coming off of a 3rd round knockout of Simone Aparecida Da Silva this past January in Miami. “But I can box, I can brawl. I’m multi-dimensional, I can fight with heart. That’s what helps me and I’m able to adjust. Whatever she brings, I’ll be able to bring it harder. I mean, we’ll see.

“Katie Taylor is a great fighter. She has it all too. Hundreds of fights in the amateurs and her pro fights. She has a lot of experience, more experience than me in the ring. But when it comes down to it, the best woman in the ring… whoever wants it more is going to win the fight. And I want it!”

Cant wait to see Serrano takes the belt from Katie.

Serrano is gonna mop this [B]Euro HYPE JOB[/B] and I can't wait! They can fight in outer space. It won't matter:boxing:

[QUOTE=Rusty Tromboni;20569990]Persoon is a dude, too.[/QUOTE] Well, she ain't no looker, if that's what you mean, but she deserves a rematch as much as anyone else ever did.