It was Cheeseman’s first defeat in sixteenth contests which saw him fast-tracked to this level with decision wins over frequent U.K. visitor Carson Jones and then Asinia Byfield to take the vacant British title last time out.

Garcia, promoted by former middleweight champion Sergio Martinez is now undefeated in 29 contests and is on the verge of a world title shot. Garcia set a torrid pace from round one, edging the session with more accurate punching and superior ring generalship. 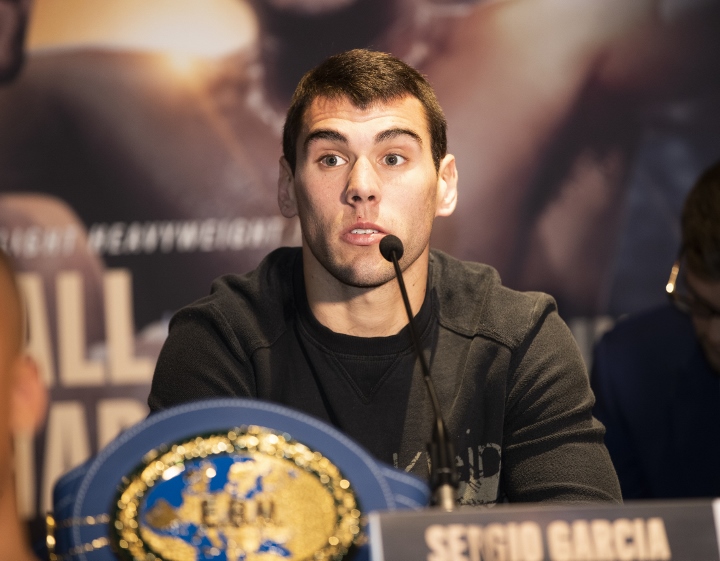 In the second Garcia established his jab beautifully while demonstrating excellent footwork. Cheeseman responded with a number of sharp right hands as the fight reached boiling point after three rounds but it was already becoming one sided.

As Cheeseman (now 15-1) advanced, Garcia jabbed extremely well and continued pushing out quick, straight right hands. It seemed that the Spaniard was doing almost everything a little better than the British fighter.

Towards the end of the fifth, Garcia was confident enough to box with his hands low as mentor Sergio Martinez once did. As the bloodied Cheeseman advanced, Garcia began to toy with his challenger, dancing clockwise while peppering out single and double jabs.

The eighth saw Cheeseman advance breathlessly, pushing Garcia into moments of discomfort, but ringsiders wondered if more had been taken from the man attacking than his intended prey.

Indeed, the Spaniard regained complete control in the ninth with Cheeseman looking a beaten man. The cultured Garcia moved and jabbed to the body, appearing supremely confident and comfortable.

After hurting the visitor with a body shot, Cheeseman went for broke in the final two championship rounds, at times alarmingly walking forward with hands down and zero defence in the hope of landing a Hail Mary finishing shot. It wasn’t to be and this goes down as another terrific travelling performance from a classy European champion.

The two scores of 119-109 looked about right with one ridiculous card of 115-114 once again making a mockery of the quality  and consistency of judging.

This was a good scrap!

Well Skeete's and Cheeseman's attitude before their fights against Lejarraga and García has been really annoying, completely overlooking them and showing no respect whatsoever. There is plenty of talent here, just no tv money and a lot of prejudices against…

[QUOTE=Ray*;19487488]This is the biggest problem with a lot of our boxers. I dont want to criticise them too much but sometimes i wish they would take the necessary steps to improve fight by fight and test themselves from domestic, to…

[QUOTE=deathofaclown;19482864]too much of a step up. Can't remember which Sky pundit said it, but they had it spot on. If you look at Cheeseman's record, he hasn't even fought a solid British level fighter. He's fought a 40 year old…

[QUOTE=Abdera;19485016]Garcia's resume was way better tan Cheeseman's. He had beaten Isaac Real former European Champion and then 2 A-Level european boxers such as Moncelli and Beaussire. Another thing is that you guys think boxing does not exist in Europe outside…