Chelyabinsk, Russia - WBO light heavyweight champion Sergey Kovalev (34-3-1, 29 KOs) survived a scare in the eight round to score a knockout of mandatory challenger Anthony Yarde (18-1, 17 KOs) in the eleventh.

Kovalev may have now secured a showdown with Mexican superstar Canelo Alvarez, which is targeted for the end of the year. 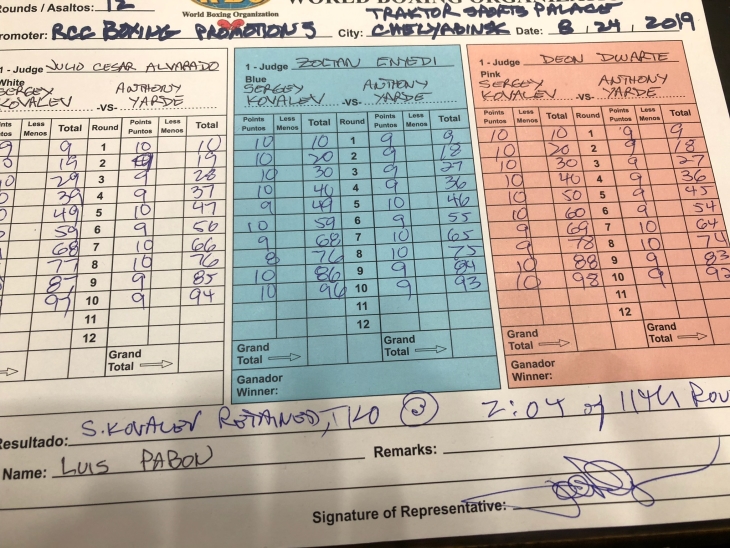 The third round was also close, but it was Kovalev who controlled the action with harder shots in the fourth. They were trading shots in the fifth round. Kovalev had the edge with more punches landing.

Yarde changed things around in the seventh as he begun to dig hard to the body and Kovalev was being stung by the shots. Kovalev was in serious trouble in the eight round, as he was rocked and hurt bad by numerous punches.

Kovalev came back in the ninth with his hard jab, because Yarde was exhausted and unable to get things going. Kovalev continued to rally and was battering an exhausted Yarde in the tenth with punches.

Kovalev landed a huge jab in the eleventh that sent Yarde down and out.

[QUOTE=Mindgames;20011747]Mike himself said its a very tiring style to pull off and i imagine it is. It does seem to suit Yardes build better though, but i guess he didnt train that way. Does anyone even teach that style anymore?[/QUOTE]…

[QUOTE=alexjust;20011425]Sometimes even subjectivity folds under blatant reality. Like GGG vs Canelo I. I never said Yarde didnt touch Kovalev. He almost took him out. He just didn't touch him enough to warrant the 4 rounds. That's all. I think the…

[QUOTE=Mindgames;20011891]It seems like hes current style negates hes offense and power badly though. A least when he put the earmuffs on an walked in he made some impression. I think hed be much more dangerous trying something like peek a…

[QUOTE=kiaba360;20011006]When opponents use earmuffs, Kov starts throwing double left hooks or a jab-right hook around the guard. It's a "pick your poison" situation. Yarde kept the philly shell because he was relying on the check hook, but his jab wasn't…