Sometimes, children set their hearts on a certain birthday or Christmas gift. When all the unwrapping is done, they look around and it’s not there…and it doesn’t really matter.

Instead of what they thought was their fondest desire, they have a puppy they hadn’t even thought to ask for. Saturday on DAZN (Saturday, 9 PM EST) is sort of like that.

The “instead of” is plenty of replacement. While no one was really asking for Alvarez to move up two weight classes following his lineal middleweight title defense against Daniel Jacobs in May, he’d doing it and chapter three can wait. Alvarez will challenge one of the central players at light heavyweight this decade in a calculated but still quite risky venture.

Sergey Kovalev looked like he’d had the course last August when Eleider Alvarez stopped him in seven rounds. Instead, in 2019, he’s bounced back to box Alvarez’s ears off in the rematch and then stopped Anthony Yarde to set up the richest fight of his career.

Has Alvarez picked Kovalev at the right time or does the Russian have one more bomb in his arsenal? 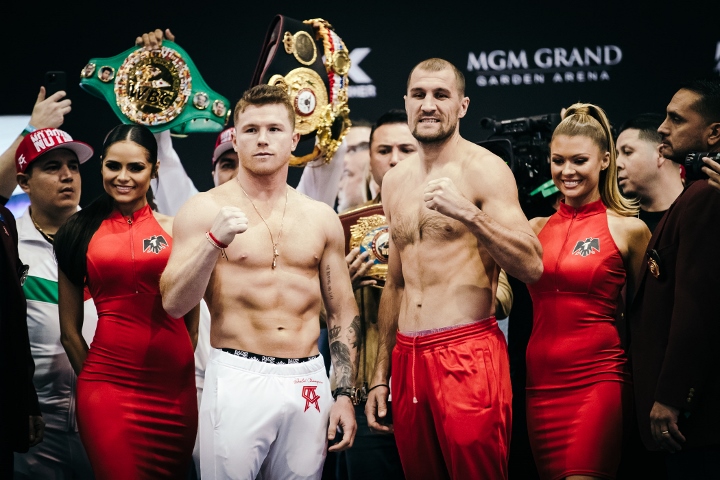 The Case for Kovalev: Is Kovalev as sharp as he was going into the first Andre Ward in 2016? No, but his decline might be slightly exaggerated. In some ways, the build to this fight feels a little like the build to that encounter three years ago. Kovalev was coming off a sort of pedestrian outing against Isaac Chilemba and yet stepped big into the moment. Since the first Ward fight it has been a different story but, for those who wonder about his mental toughness, the rebound win over Alvarez should quiet some skepticism. For all the power he’s displayed over the years, Kovalev is more tactically skilled than sometimes fully credited. He’s slower now, but his jab is still a hammer and he understands how to create punching space. The tale of the tape gives him an edge in height and reach and the latter is more than the few inches on paper. The narrow, long armed Kovalev, if he can set up the stick, will force the shorter and stockier Alvarez to work to get close all night. Alvarez’s excellent head movement will force Kovalev to work the jab in multiple. When he lands it, Kovalev could find openings to land down with his still heavy right hand and see chances for the uppercut if he can catch Alvarez pushing in. A patient Kovalev who can use the jab to slow the fight down, play keep away, and discourage Alvarez from coming forward consistently has a big chance to retain his strap at 175 lbs.

The Case for Alvarez: Alvarez is younger, to date has been more durable, will be quicker, and is hard to hit consistently. All those things make his chances of moving up to win look good. Alvarez has developed into an excellent all-around technician, something on display in the second Golovkin fight and his last win against Jacobs. Does he have the power to discourage Kovalev? Does it matter if Kovalev lands his good stuff and Alvarez handles it fine? While no knockout artist, Alvarez has shown heavy hands over the years and he does get to the body well. Ward worked his way back in to the first fight with Kovalev by digging to the ribs and Yarde seemed to hurt Kovalev downstairs in August. Alvarez isn’t as big as those men though and hasn’t made a habit of stopping opponents he wasn’t supposed to. Often against better foes, Alvarez gets by just barely, sometimes with controversy, sometimes without. His best bet is to come in maximizing his edges in youth, reflexes, and looking to land big often enough to pile up rounds and outbox the bigger man.

The Pick: Is this the fight where Alvarez delivers the blowaway superstar performance he hasn’t really had in a big fight yet? Or will this be another night like Erislandy Lara or the Golovkin fights where a little luck goes a long way? Could his reputation for getting an abundance of the benefit of the doubt work against him? Much has been made of his spat with promoter Oscar De La Hoya and De La Hoya can tell him about that last question. After receiving some overly lopsided cards against Pernell Whitaker and Ike Quartey, De La Hoya felt the screw turn a bit in the Felix Trinidad contest. No one likely wants to take the sort of heat CJ Ross and Adelaide Byrd did after turning in two of the most decried cards of the decade in Alvarez’s loss to Mayweather or draw with Golovkin, respectively. If the fight is close, could Alvarez’s reputation for being a judge’s favorite actually work against him?

Sometimes, it can happen.

While an Alvarez win by stoppage isn’t out of the question, it’s hard to find a lot of evidence in his career to date for it. Kovalev may be far enough on the other side of the hill for it but a decision where he just lands a little too much and Kovalev can’t find him often enough feels more likely. Can Alvarez get it done?

Kovalev’s chances in this fight just feel wildly underrated. While he’s been stopped twice, both of those losses came to men naturally much bigger men than Alvarez. Kovalev knows the majority of pundits and observers think he’s there to lose on Saturday. Sometimes that’s just the sort of fire a veteran needs, especially in the biggest spotlight of their career, to pull together a gem. The short turnaround from the physical Yarde fight might be a detriment. It could also be a plus, keeping him with less time to resume bad habits between fights and letting his skills stay sharp.

The thinking here is the older man’s jab is still potent enough to pin Alvarez outside too often for the middleweight king to get inside enough to exact a telling price. The dimensions of the fight behind the jab will make Kovalev’s four inch height advantage seem more at times. It will be competitive but not enough for at least two of the judges to go the favorite’s way. The pick is Kovalev by decision.

[QUOTE=djbiancafrost;20161101]Oh glad the writer choose Kovalev over the popular Ginger. I really cant understand why people choose Canelo easily and even have him win by KO or TKO. When was the last time Canelo wins Ko over elite opponent?[/QUOTE] A…

Oh glad the writer choose Kovalev over the popular Ginger. I really cant understand why people choose Canelo easily and even have him win by KO or TKO. When was the last time Canelo wins Ko over elite opponent?

[QUOTE=willieb24;20160157]Any good streams out there hit me up[/QUOTE] I don't bother with pirated streams. You can get some dirt cheap DAZN accounts if you know where to look.

Any good streams out there hit me up