Sergey Kovalev vs. Bektemir Melikuziev on January 30 in Crossroads Battle

In the epitome of a crossroads fight, former three-time light heavyweight world titleholder Sergey Kovalev and up-and-comer Bektemir “Bek Bully” Melikuziev will meet on Jan. 30 in the main event of a DAZN card at the Luzhniki Arena in Moscow, sources told BoxingScene.com on Wednesday.

The fight will headline its own card and is not on the same show Top Rank is doing on the same day in Moscow. That card, announced on Wednesday, will be headlined by unified light heavyweight world champion Artur Beterbiev defending against Adam Deines on ESPN+ at VTB Arena. 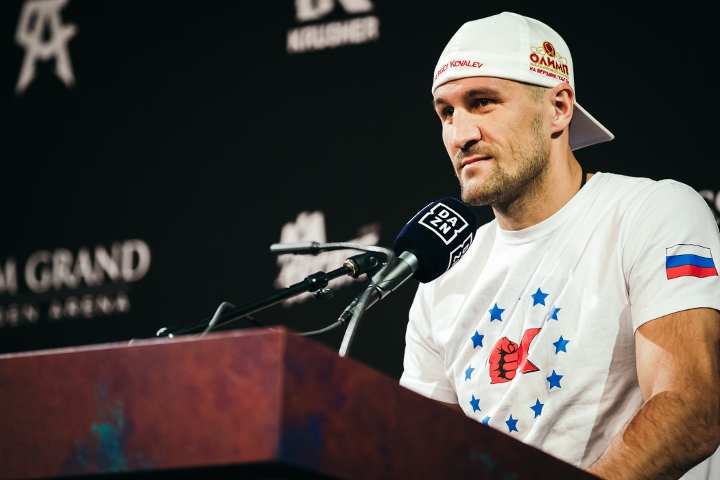 Melikuziev’s last fight was at 168 pounds. Kovalev had been scheduled to fight former light heavyweight world title challenger Sullivan Barrera at 180 pounds in the main event of a DAZN card on April 25 at the Fantasy Springs Resort Casino in Indio, California, but the show was canceled due to the coronavirus pandemic.

Kovalev will be fighting for the first time he lost his 175-pound world title to Canelo Alvarez by brutal 11th-round knockout on Nov. 2, 2019 at the MGM Grand in Las Vegas. Alvarez had moved up two weight classes to challenge him for his title.

Even though Kovalev is promoted by Main Events, Golden Boy Promotions owes Kovalev his next fight based on the terms of the deal for him to fight Alvarez. If Kovalev wins the fight against Melikuziev then Golden Boy would owe him a second fight, according to one of the sources.

Melikuziev, a southpaw, has been moved quickly by Golden Boy because of his elite amateur career.

He is coming off a third-round knockout of Alan Campa on Oct. 30 and also owns professional victories over Clay Collard and Vaughn Alexander.

[QUOTE=rrayvez;20957279]to be fair, Kovalev’s career as an elite fighter was already finished before that fight. That’s actually why Canelo chose him.[/QUOTE] True. He just put the final nail in the coffin

[QUOTE=Ry92;20957227]Kovalov advisors wer smart. Knew canelo fight was a cherrypick for sure so had written in contract u owe us more paydays n fights per win after this for consider the canelo fight. Maybe if backend deals for the loser…

[QUOTE=Eastlos;20957400]And yet people think, Berlanga is an actual better prospect than Bek the Bully, LMAO!!! One fights nothing but bums while the other one has W’s over Clay Collard & Vaughn Alexander and is about to fight the former king…

[QUOTE=rrayvez;20957279]to be fair, Kovalev’s career as an elite fighter was already finished before that fight. That’s actually why Canelo chose him.[/QUOTE] Isn't this the most unbiased truth.

Another Yarde type of opponent for Kovalev in Russia. I doubt he pulls this one out like he did the previous one. Kovalev is just going through the motions at this point.