Kovalev dropped a battered, fatigued Yarde with the last of many jarring jabs at 1:06 of the 11th round in their 12-round, 175-pound title fight at a sold-out Traktor Sports Palace in Chelyabinsk, Russia, Kovalev’s hometown. Yarde landed flat on his back, didn’t have enough energy to even try to get up and referee Luis Pabon counted him out at 2:04 of the 11th round.

The 36-year-old Kovalev (34-3-1, 29 KOs) overcame serious trouble late in the eighth round to successfully defend the WBO 175-pound championship he won back from Eleider Alvarez in his prior appearance. Alvarez upset Kovalev by seventh-round knockout last August 4 in Atlantic City, New Jersey, but Kovalev came back to out-box the previously unbeaten Colombian in their 12-round rematch February 2 in Frisco, Texas.

“I am dedicating this win to Max Dadashev,” an emotional Kovalev said, referring to his late stablemate, who died July 23 from brain damage suffered during a July 19 fight. “It’s hard for me now when everyone is celebrating, and I have to think about him and dedicate this win to him.”

Yarde, 28, repeatedly promised he’d knock out Kovalev, but he couldn’t complete the job when he had Kovalev hurt in the eighth round.

Kovalev’s consistently effective jab, experience and superior stamina proved to be too much for Yarde (18-1, 17 KOs), who entered their fight with just 30 fights combined on a then-unblemished amateur and professional record. The hard-hitting British contender had knocked out 28 of his 30 opponents as an amateur and professional, yet Yarde had never before boxed someone as skillful, powerful or as accomplished as Kovalev.

“I didn’t expect an easy fight,” Kovalev said. “There was nothing that shocked me. I expected it to be a long fight and I am really surprised that I stopped him.”

Kovalev’s victory is expected to lead to a high-profile showdown versus Canelo Alvarez later this year. The Mexican middleweight star would have to move up two divisions to challenge Kovalev, but he has identified Kovalev as the opponent he wants to fight next.

Kathy Duva, Kovalev’s promoter, and Golden Boy Promotions president Eric Gomez, were negotiating a deal for an October 26 bout between Alvarez and Kovalev even after the Kovalev-Yarde fight was announced for Saturday night. Kovalev concluded late last month, though, that he couldn’t walk away from a fight that was already scheduled, despite that he was offered an enormous sum of money to battle Alvarez.

Yarde tested Kovalev at times Saturday night, but the inexperienced challenger couldn’t fend off an aggressive Kovalev in that ill-fated 11th round.

The beginning of the end came when Kovalev opened up on a tired Yarde with about a minute to go in the 10th round. Yarde could barely hold up his hands by then.

Kovalev tried to finish off Yarde at the end of that 10th round, but the bell sounded before his flurry could do enough damage to prompt Pabon to step in to stop it.

Kovalev landed 41-of-92 punches in that one-sided 10th round, according to unofficial CompuBox statistics. Yarde landed only 4-of-46 punches during those three minutes.

After a rough eighth round in which Yarde hurt him, Kovalev answered trainer Buddy McGirt’s demand between rounds to show him something by having an impressive ninth round. Yarde didn’t throw many punches in the ninth round, when Kovalev consistently landed his jab and took advantage of Yarde’s fatigue.

Kovalev and Yarde traded hard jabs just before the midway mark of the eighth round. Kovalev cracked Yard with another stiff jab about 30 seconds later, but Yarde came back to hurt Kovalev with a right hand when there were 50 seconds to go in the eighth.

A left-right combination by Yarde about 10 seconds later badly hurt Kovalev and forced him to hold. Kovalev held and moved his way to the end of the round, but Yarde clearly had taken control of the bout by then. 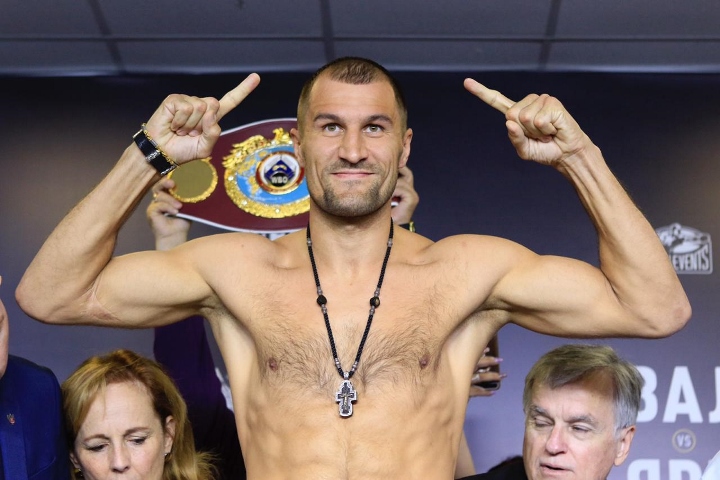 Yarde landed two hard left hands to the body in the final minute of the seventh round, which slowed down Kovalev and kept him from throwing what had been a very effective jab. Yarde also landed an overhand right just before the bell sounded to end the seventh round.

Pabon warned Kovalev early in the seventh round for hitting Yarde when Pabon called for a break. Kovalev touched gloves with Yarde to acknowledge his foul.

Kovalev continued connecting with his jab throughout the sixth round. Yarde pressed the action at times in the sixth, but he couldn’t land any of the power shots he threw.

Yarde already appeared tired by the fifth round.

Kovalev connected with a hard jab that affected Yarde about a minute into the fourth round. Another hard left by Kovalev caught Yarde with 40 seconds to go in the fourth.

A left to the body by Yarde caught Kovalev just after the midway point of the third round. Through the first three rounds, both boxers had trouble landing clean power shots on his opponent.

A jarring jab by Kovalev caught Yarde in the middle of his face and backed him into the ropes at the 1:20 mark of the second round.

Kovalev tried to establish his jab throughout the first round. A stiff jab by Yarde moved Kovalev backward with about 1:15 to go in the opening round, but he missed with a few left hooks later in it.

Ten rounds later, Yarde’s knockout streak ended at 16 and he suffered the first loss of his professional or amateur career.

“Yarde is strong and has a good boxing IQ,” Kovalev said. “He needs more experience. I have a lot of experience and I am ‘The Krusher.’ ”

Wow! That was a really entertaining fight! Yarde did well, great win for Kovalev!

[QUOTE=MulaKO;20015121]Just one of the many around here[/QUOTE] There's more activity here but boxing forum 24 is way better in terms of who's on it. This site is such a shambles.

[QUOTE=BoloShot;20013895]He's as dumb as they come and he excuses how stupid he is by saying he comments to the level of the respondent, despite me not responding to him initially.[/QUOTE] Just one of the many around here

[QUOTE=MulaKO;20013882]So does your mother but I don’t see her giving her ranking By the way , I did get lucky , it was with your momma How’s that for ranking and rating azzhole I don’t need to explain Fugh all…

[QUOTE=QueensburyRules;20013881]- -I tailor my response to the level of the respondent.[/QUOTE] No you sound reta.rded and clueless no matter what.