AS VEGAS – Marlen Esparza fought as long as she could Saturday night with one of the most disgusting cuts you’ll ever see in a boxing ring.

After the ninth round, a ringside physician finally decided Esparza shouldn’t continue with a sizable portion of her forehead exposed. That decision afforded her rival, Seniesa Estrada, a technical-decision win in what began as a very competitive bout, before an accidental clash of heads caused that nasty gash in the fifth round of a scheduled 10-rounder on the Canelo Alvarez-Sergey Kovalev undercard at MGM Grand Garden Arena.

Referee Robert Byrd stopped it before the 10th round of their grudge match began on the advice of a Nevada State Athletic Commission doctor.

Estrada, of East Los Angeles, California, won the vacant WBA interim women’s flyweight title by beating Esparza. The 27-year-old Estrada (18-0, 8 KOs) moved up from the junior flyweight limit of 108 pounds to the flyweight maximum of 112 to face Houston’s Esparza (7-1, 1 KO).

All three judges scored their fight for Estrada. 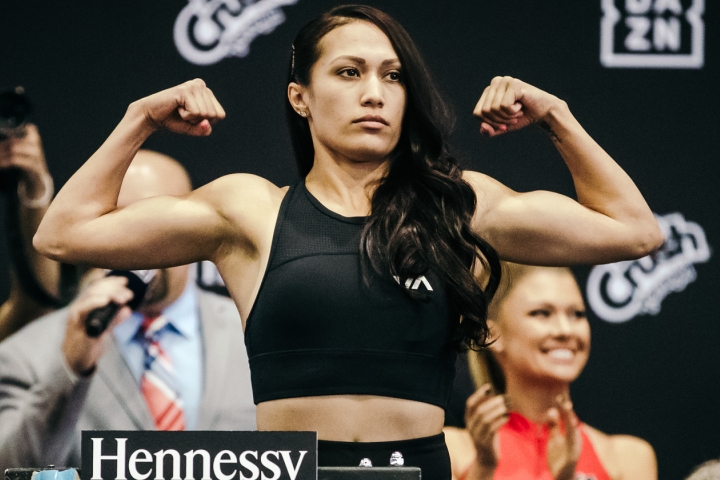 Steve Weisfeld scored all nine rounds for Estrada (90-81). Chris Flores (89-82) and Tim Cheatham (88-83) had it slightly closer, but still scored Estrada a convincing victor over the 2012 Olympic bronze medalist.

“You know, it was early,” Esparza said of the cut. “So, I was really trying to decide if it was OK or not. I’m sorry, guys, I couldn’t continue, but I couldn’t see anything. I could have stopped after the third round, fourth round, whenever it happened. But it was really hard to deal with. It was really hard to see. I didn’t think I was losing that many rounds at all, though. She says she has a lot of power – she doesn’t. It was a head-butt. I continued fighting, but I had to stop because I couldn’t see. I think it was a poor decision. Some of the rounds she did win, but it wasn’t like that. I couldn’t see.”

In the round before the fight was stopped, a lunging left hook by Estrada nailed Esparza and snapped her head back about 1:15 of the ninth round. Another accidental clash of heads made Esparza paw at her cut just before the ninth round ended.

Estrada pressed the action throughout the eighth round, when various lefts and rights often kept Esparza on her back foot. A seemingly spent Esparza walked back to her corner slowly once the eighth round ended.

Estrada drilled Esparza with a straight left exactly at the halfway point of the seventh round. About 20 seconds later, Estrada landed a right-left combination that caused Esparza to hold.

After suffering a terrible cut in the fifth round, Esparza fought with a sense of urgency early in the sixth round. She bled badly from the cut by the end of the sixth round, yet Esparza managed to remain competitive in those three minutes.

Byrd warned Estrada for a low blow about 45 seconds into the fifth round. Soon thereafter, a hard, accidental clash of heads opened a deep, gross gash across Esparza’s hairline.

Estrada applied pressure and landed several left hooks in the first two minutes of the fourth round. Esparza’s output slowed down during that fourth round.

Esparza’s counter rights troubled Estrada early in the third round. Estrada landed two left hooks in the middle minute of the third.

Estrada also connected with a left-right combination just before the bell sounded to end the third round.

Esparza went after Estrada’s body early in the first round. Estrada came firing back to halt Esparza’s attack.

Estrada connected with a straight right hand with just over a minute to go in the opening round.

[QUOTE=crisantonio917;20165741]Estrada is wack and should have been penalized for head butting all night, slap fest...[/QUOTE] I didn't see a intentional headbutt and if you watch the replay of the headbutt that caused the cut, it was definitely Esparza who was…

fight of the night easily....possibly the weekend

[QUOTE=NachoMan;20160685]Jesus Christ! This site is filled to the brim with noobs! Learn the damn sport. That was a complete ass whooping.[/QUOTE] Too many white boys on here, they don’t know what the hell they’re watching. Estrada whooped Esparza’s ass.

Estrada is wack and should have been penalized for head butting all night, slap fest...