Sebastian Fundora: This Is Another Chance To Show I'm Not Just A Freak That's Tall

The emerging junior middleweight hopes, however, that they’re starting to appreciate his capabilities and his entertaining style, too. The 6-feet-6 Fundora will get another opportunity to showcase himself Saturday night, when he’ll square off against Ghana’s Habib Ahmed on the Errol Spence Jr.-Danny Garcia undercard at AT&T Stadium in Arlington, Texas.

“It’s another big card,” Fundora told BoxingScene.com. “We fought in the beginning of the year on the Wilder-Fury card, and that was a big fight to show the fans we’re a good fighter, too. This card is another chance to show I’m not a joke, I’m not just a freak that’s tall, like, ‘Oh, that’s all he sells for,’ that I can really fight.

“I wanna show I can do something in the division and become a world champion one day. … I like to sell as a fighter, as an exciting fighter, as someone that they wanna watch not because he’s tall, but because he can fight.” 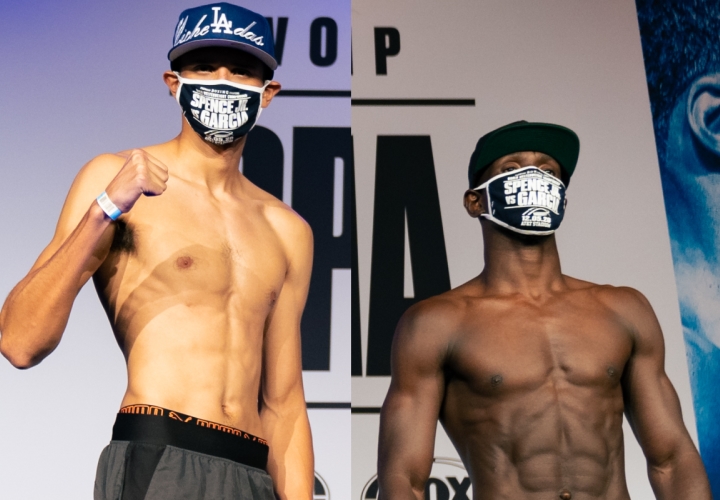 The 22-year-old Fundora, who is nicknamed “The Towering Inferno,” produced the most impressive victory of his four-year pro career in his last fight. He overpowered and knocked out veteran Nathaniel Gallimore in the sixth round August 22 at Microsoft Theater in Los Angeles.

“I think that was a fight to show the 154-pound division that we’re not here to play around, that we’re here to do some damage,” Fundora said. “It was to show the fans, too, because I remember reading social media after that fight, people were telling us we really were something to look at, to expect us to be in championship fights in the future.”

Fundora, of Coachella, California, was supposed to meet Mexico’s Jorge Cota (30-4, 27 KOs) on Saturday night. Once Cota contracted COVID-19, Ahmed immediately stepped in because Al Haymon’s Premier Boxing Champions had him on standby in case Cota or Fundora tested positive for the coronavirus.

The 30-year-old Ahmed (27-1-1, 18 KOs, 1 NC) has lost only to former WBO super middleweight champ Gilberto Ramirez (40-0, 26 KOs), who stopped Ahmed in the sixth round of their February 2018 fight in Corpus Christi, Texas. Ahmed admits that he never should’ve fought at the super middleweight limit of 168 pounds.

Ahmed weighed in as a junior middleweight for the first time Friday, at a career-low 152½ pounds. Fundora was only one pound heavier, but he has a six-inch height advantage over Ahmed.

“I don’t have a problem with it,” Fundora said of switching opponents on three days’ notice. “We trained for everything. We did train for this right-hander that can turn southpaw, but whatever this guy brings, it’s not gonna be a problem for me. He’s still a guy in front of me who has two hands, still has two feet – nothing more, nothing less.”

Just gotta learn how to use his height. If he does that people are in trouble at any range they try to engage Fundora.

6ft welterweights are already considered “big”. This guy is definitely a freak.

You're a LMW with the dimensions of a HW....you'll definitely a freak lol.