"This training camp has just been us doing more of the same things that we always do," said Fundora. "We've been getting our work in safely. Nothing is stopping us. We're doing all of our normal sparring. This is my second fight since the pandemic and I think that's going to help everything go smoothly for me." 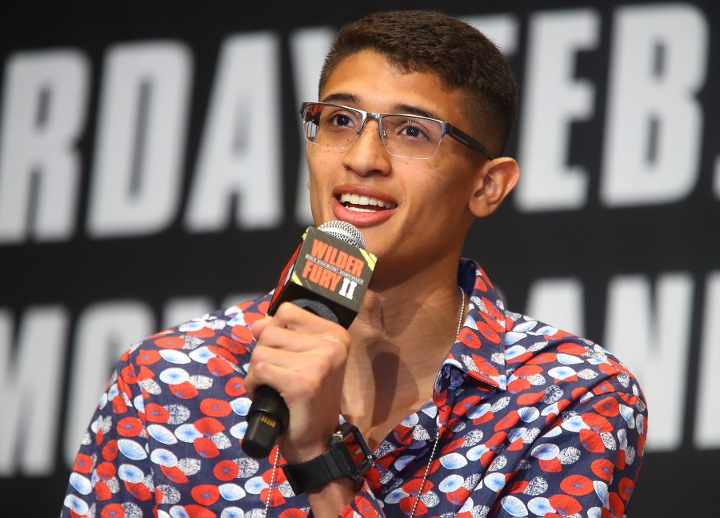 A pro since 2016, Fundora has always fought with great regularity, competing seven times in 2017 and three times per year in subsequently. Even in 2020, Fundora will be stepping into the ring for the third time, after beating Daniel Lewis in February and most recently Nathaniel Gallimore in August.

"I'm very confident I'm not going to have any ring rust heading into this fight," said Fundora. "It's important to me to keep that rust away so that I can be totally comfortable inside the ring. I don't really take any time off at all. I treat this just like a regular job. I have to work like everybody else."

On Saturday, Fundora will face an experienced opponent in Cota, who also shares his Mexican heritage. Cota has faced top super welterweights Jermell Charlo and Jeison Rosario, and was impressive in his last bout in January as he stopped Thomas LaManna.

"Cota is Mexican warrior, so I expect him to come to fight and not be afraid to exchange," said Fundora. "Luckily for the fans, we're not afraid to exchange either. We'll be ready for his aggression. I hope he brings his A-game, because I'm going to bring mine and give the fans a great performance. The fact that we'll have such a huge audience of Mexican and Mexican-American fans make it almost feel like I'm fighting at home."

With this fight being a WBC title eliminator, Fundora could put himself into position to face unified WBC, IBF and WBA 154-pound champion Jermell Charlo or top WBC contender Erickson Lubin in future fights. Fundora knows that a statement victory will help his cause, even though his focus remains squarely on Cota.

"This is my chance to say that I'm here and I'm coming for it all," said Fundora. "Right now I'm just focused on Cota and my fight on Saturday. I believe I'm right there with the top contenders and champions and that I'm ready for any of them after I handle my business this weekend."

This is a stay busy fight for Fundora. I just don’t see Cota winning this one. He gets hit too easily and Fundora’s high output will be too much for him to handle. Fundora by 8th round TKO.

Think it was the 4th

I like Fundora, but Cota has no business in a title eliminator.

[QUOTE=archiemoore1;20922003]Didnt Jorge Cota get smoked in one round by Erickson Lubin? Why is he fighting Fundora?[/QUOTE] He looked shot against Charlo too.