Scott Quigg has hinted that retirement could be the next step after suffering a crushing defeat.

Quigg took on the Dubliner in what was his first fight in 17 months after over a year out with a jaw injury.

And Carroll, an ex-IBF world super-featherweight title challenger, was just better all-round, exclusively live on Sky Sports and DAZN, winning almost every second of every round before the towel was thrown in by Joe Gallagher in the penultimate of 12 rounds. 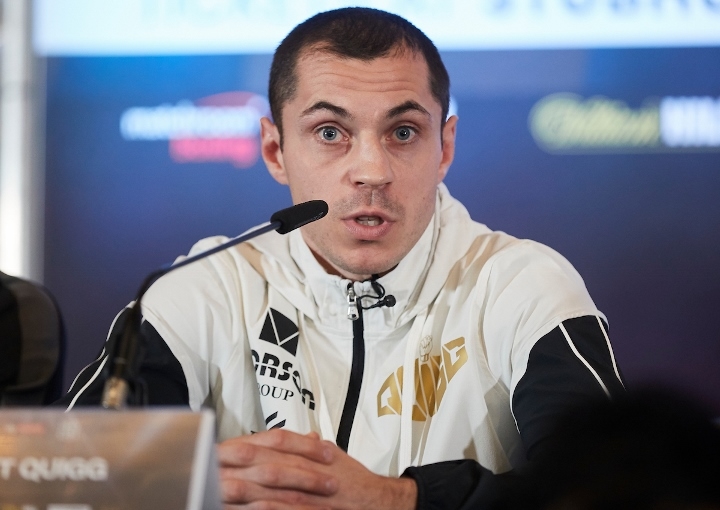 Quigg teamed back up with Gallagher for this fight, after splitting with him in February 2017 to join Freddie Roach at the Wild Card Gym in Los Angeles, but the former WBA ‘regular’ failed to capture his old form and really failed to get a foothold in the fight, leaving his ambitions of becoming a two-weight world champion in tatters.

“The thing is with me I don’t kid myself,” Quigg told the Bury Times.

“I’m a realist and I’m always real with people and sometimes I upset people because of how real I speak. But I’m the same with myself and I knew if I didn’t win tonight the gloves were getting hung up. Unfortunately I didn’t win so I’m not going to go back on my word. People will say ‘don’t make any hasty decisions’ but there’s nothing hasty about this.

“I want to become a world champion again and this is too hard of a sport just to stick around to just make the numbers up. It’s a dangerous sport. So if I’m not good enough to become world champion again then it’s time to hang them up and find something else to do which is going to be the hard thing. I just knew it wasn’t there. In the changing rooms warming up I thought ‘meh, I’ll get there’.

“And then the fight started and sometimes it can take me two or three rounds to get going but after about four rounds I just couldn’t seem to get anything going. My timing was off, I was missing wildly, my distance was out and I realised it wasn’t there. If you’re playing football or cricket or tennis or whatever, if you’re timing is out you get away with it. But in boxing when you realise it’s not there then unfortunately you’re getting beaten up.

“Me three years ago, he wouldn’t have lasted and that’s taking nothing away from him, he boxed a great fight tonight, but a couple of years ago I’m levels above. Unfortunately you can’t stop father time. I’ve had a good career and I’d rather have been in there tonight and found out that it wasn’t there anymore rather than wondering whether I could have had one or two more fights.”

Details regarding the future of Quigg will be revealed in due course but it’s likely that we won’t see him in the ring again after his most damaging defeat. He leaves the sport with a record of 35-3-2 with 26 quick finishes.

[QUOTE=theface07;20454070]Your point? Your actual age doesn't represent your age as a pro boxer. He's an old 31 who obviously doesn't have the reflexes or explosiveness he once had and for a puncher, who moves in straight lines for the most…

[QUOTE=theface07;20454080]Really? He got stopped by Jono Carroll! I think that's a good indicator of where he is right now.[/QUOTE] That's just one performance. Great players in other sports lose to random people every now and again. It happens. This is…

[QUOTE=Roberto Vasquez;20452549]Quigg seems to be giving up too easy here[/QUOTE] Really? He got stopped by Jono Carroll! I think that's a good indicator of where he is right now.

[QUOTE=TheMyspaceDayz;20452471]Exactly. Watch Quigg decide to fight one more time and waste the other guy if buddy throws an average amount of shots and stands still. The way he was talking though is that he is only willing to fight on…