Savannah Marshall: The Lockdown Has Been Brilliant For Females

It is more than eight years since Savannah Marshall became the only boxer to inflict defeat on Claressa Shields, but having had their names linked together for so long, Marshall is fed up talking about the American double Olympic champion.

Their one meeting happened in Qinhuangdao, three hours’ drive east of Beijing, in the World Amateur Championships. It was only in the second round of the tournament and after comfortably beating a then 17-year-old Shields on points, Marshall won four more bouts before claiming the gold medal. But it has proved to be the defining win of Marshall’s career to date and even encouraged Mayweather Promotions to sign her when she turned professional.

If Marshall beats Hannah Rankin for the vacant WBO middleweight title at the SSE Arena, Wembley on Saturday, a fight with Shields, who unified all the middleweight titles last year before stepping down to super-welterweight, could happen next year. Could is a word often used in boxing, though, and, for now, Marshall has no thoughts about Shields at all.

“It doesn’t spur me on,” Marshall said when asked about the prospect of a big rematch with Shields. “It is what it is, it’s a business. I couldn’t really care less about Claressa.” 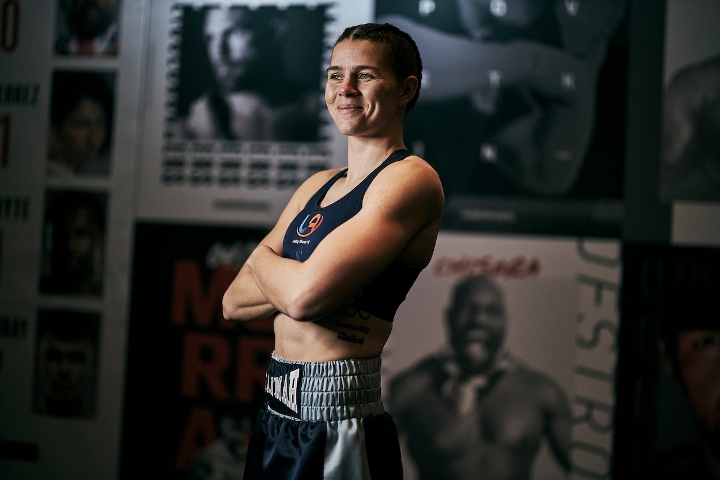 For now, Rankin stands in her way. While Marshall spent seven years as part of the Great Britain amateur set-up, things have been very different for Rankin, who only took up boxing to get fit when she moved from Scotland to London to train as a classical musician. Despite that unusual start, Rankin held the IBO title last year and went the distance with Shields in a world-title fight in 2018.

“There is a big difference between amateur and pro but it does give you a solid foundation” Marshall said. “Taking nothing away from Hannah, she has done what she needed to do and got where she has without that amateur experience, so do you need it? Obviously not, because she is a former world champion.

“I’m expecting the best Hannah Rankin there is and I am expecting a tough fight. Hannah brings a lot to the table. On paper, with who she has been in with, this could be my toughest fight. She is no mug. She is not going to stand there with her hands down and let me hit her.”

This fight was originally scheduled for two weeks’ ago but was postponed after Peter Fury, her trainer, tested positive for coronavirus. Marshall said she had a sense of dread she was in for bad news as she waited for her test results in the bubble for that fight.

“When I got that cancellation, I just thought ‘that’s typical me’,” Marshall, 29, said. “I wasn’t even shocked. I was in the hotel room texting Joe Laws and it got to 9pm and he had got his test result and me and Peter hadn’t and straight away I knew. I’m thankful I was lucky enough to get on the next show possible.

“It hasn’t really been hard, it is just the way it has panned out and there is nothing I can do about it but crack on. Thankfully Peter was all right.

“There hasn’t really been time to think. I only just got round to taking my braids out and I was putting them back in. I remember coming back after the fight was cancelled and there was talk of putting it on November 14 on the Katie Taylor bill. I was just thinking ‘another four weeks of sparring’. Thankfully it got put on the next show possible.”

Marshall made her professional debut on the undercard of the Floyd Mayweather-Conor McGregor fight, but her time with Mayweather Promotions proved short-lived. Despite that, she said she would love to return to the United States, despite building a close relationship with Fury.

“Peter was the first person I came across in professional boxing I came across. You develop a friendship, but I like his coaching style and I trust Peter. I think he has got my back 110 percent. That is something I think you really need in the professional game.

“It was mentioned that he might not be able to be in the corner, but for a world title fight I want Peter there. We have trained week in and week out for ten weeks, so you don’t want to leave anything to chance. It feels like this has been the longest training camp ever.”

Indeed, before lockdown, Marshall had been due to box for a world title at light-heavyweight and has boxed most of her professional career at super-middleweight. She believes she is well suited by boxing at middleweight, though.

“At light-heavyweight, there was a lot of timber on the legs and arse,” Marshall said. “I feel a lot better. I feel a lot fitter and faster. I have been close on the weight for weeks. It’s not like I have killed to get down to the weight.”

Despite the lockdown, it has been a good year for female boxing in the UK, which has been given a spotlight like never before. Saturday’s winner will become Britain’s third female reigning world champion, although having it behind closed doors is a drawback.

“I feel more sorry for the fans and the people close to me, especially my mum and Dad. My Dad has been all over the world to watch me fight, but he can’t come to watch his daughter have her first professional world title fight.”

Kudos to Floyd and Ellerbe for being such a critical contributor to the restoration of women's boxing. [url=https://postimages.org/][img]https://i.postimg.cc/Pf94m7dg/96107170-gd.jpg[/img][/url]

Don’t get carried savannah it’s because your cheap and it satisfies the PC brigade , nothing personal I’m all for equality but that’s the honest truth , Hearn knows it and so do sky ..

....because they've been able to get better at cooking and cleaning? :dunno: