Savannah Marshall finally became a big name on the world stage as she won the vacant WBO middleweight title as she stopped Hannah Rankin in the seventh round at the SSE Arena, Wembley.

It was a punch perfect performance from Marshall, 29, who is the only boxer to have defeated Claressa Shields, a feat she accomplished on her way to winning a world amateur gold medal in China in 2012. 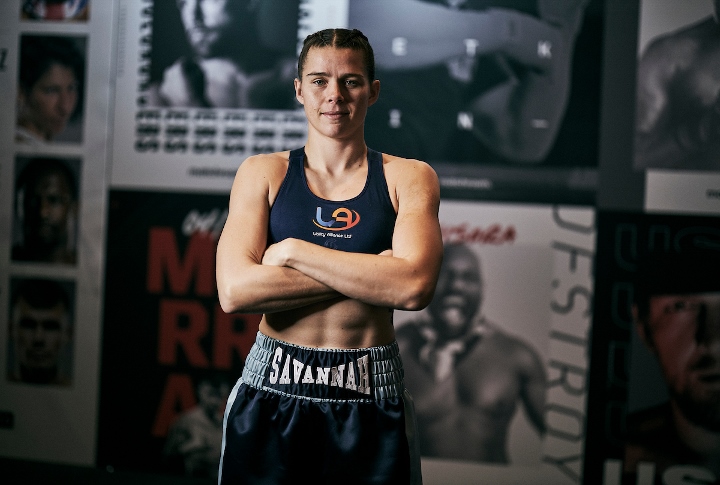 In stopping Rankin, Marshall, 29, managed something even Claressa Shields (now world champion at super-welterweight) couldn’t do, as Rankin had gone the full ten rounds with Shields in 2018. Now the two could be on track for a long overdue rematch next year.

“I’m over the moon,” Marshall said. “For months I have watched all the other Matchroom girls get their chances and grab it with both hands and there have been times when I have though ‘God, when is my chance ever going to come’. Tonight it did and I certainly grabbed it with both hands.

“I’ve learnt the hard way. I have had nine fights in three years and I’ve learnt that sometimes it is not just about the fighting, it is about the profile and if you are loud maybe. But Peter [Fury, her trainer] has always said that if you are good enough, you’ll get there.

“I took a fight in April at light-heavy and I’ve come all the way down to middle for this because the opportunity was there. The only reason Claressa has got the belts is because she got there before me, not because she is better than me, because I will tell you now, she certainly isn’t. And I know she doesn’t want none of me.”

Rankin had none of Marshall’s amateur grounding and, tough as she was, she was simply not equipped to handle Marshall. The 30-year-old Scot came forward throughout trying to make a fight on it, but Marshall, who also was notably bigger, dominated the range and picked her off with the jab before landing with impressive combinations to head and body.

By the fourth round, Rankin had a bloody nose was bruising around her face, yet she could not throw Marshall off her rhythm. Marshall was happy to box at a fast pace but looked relaxed, was light on her feet and able to draw Rankin onto her heavy shots, the left hook proving particularly effective.

Rankin looked to be fighting a hopeless task by halfway, but Marshall closed the show in the seventh. Landing two overhand rights and then a right uppercut that rocked Rankin. Marshall then pounced, hammering home a series of right hooks and uppercuts.

There was just no let-up as Rankin tried to cover up, but eventually she was forced to take a knee. She beat the count but referee Phil Edwards waved it off. The time was 1:59 of the seventh.

“The best middleweight in the world,” Fury shouted. She may soon get a chance to prove that.

[QUOTE=glenn mcrory;20877839]Yes Alvarez is scared of the big bad Saunders and Smith. A guy that literally looks like s**t every fight(dont bring up Lemieux, all hes been doing is getting smacked around the canvas recently), and a guy that went…

[QUOTE=glenn mcrory;20872439]lol You pretty much made an excuse for every loss to half relevant fighters. Yes all your fighters were old shot and smaller. lol There is no british fighter Canelo would ever lose to, lol he aint ducking anyone…

[QUOTE=Sid-Knee;20871927]Yeah, you're right, there's no world class fighters from the UK at all. Sigh. You're a clown who can't back yourself after mouthing off so have to write more madness to deflect. Too scared to try and have a normal…